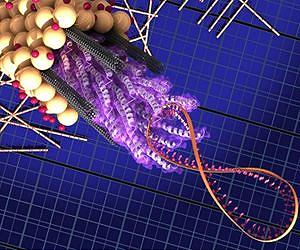 The problem is naturally dual in nature and yet all the inherent components are available in part or in whole. Just how does a bucket of nuts and bolts self assemble into an aware state?

Can we even imagine a least action? Playing around with zeolites, we can work up self catalytic environments to generate a lot of complex molecules. So how does it resolve into a chemical version of the mathematical game of Life?

Because we can in fact emulate the situation in two dimensions it is a simple imaginative extension to project the production of increasingly complex molecules. Yet we are going to have to get it right and then observe it in action. Going from there to self replicating DNA has to take time and encasing it all inside a organic bubble a great deal more complexity. Yet it may turn out to be easy.

I am sure that the tools exist and what is left is the time and best conditions and really good imaging tools to sort out wheat from chaff.

One of the great mysteries of life is how it began. What physical process transformed a nonliving mix of chemicals into something as complex as a living cell?

For more than a century, scientists have struggled to reconstruct the key first steps on the road to life. Until recently, their focus has been trained on how the simple building blocks of life might have been synthesized on the early Earth, or perhaps in space. But because it happened so long ago, all chemical traces have long been obliterated, leaving plenty of scope for speculation and disagreement.

Now, a novel approach to the question of life's origin, proposed by two Arizona State University scientists, attempts to dramatically redefine the problem.

The researchers - Paul Davies, an ASU Regents' Professor and director of the Beyond Center for Fundamental Concepts in Science, and Sara Walker, a NASA post-doctoral fellow at the Beyond Center - published their theory in the current issue (Dec. 12) of the Royal Society journal Interface. Their article is titled "The algorithmic origins of life."

In a nutshell, the authors shift attention from the "hardware" - the chemical basis of life - to the "software" - its information content. To use a computer analogy, chemistry explains the material substance of the machine, but it won't function without a program and data.

Davies and Walker suggest that the crucial distinction between non-life and life is the way that living organisms manage the information flowing through the system.

"When we describe biological processes we typically use informational narratives - cells send out signals, developmental programs are run, coded instructions are read, genomic data are transmitted between generations and so forth," Walker said. "So identifying life's origin in the way information is processed and managed can open up new avenues for research."

"We propose that the transition from non-life to life is unique and definable," added Davies. "We suggest that life may be characterized by its distinctive and active use of information, thus providing a roadmap to identify rigorous criteria for the emergence of life.

"This is in sharp contrast to a century of thought in which the transition to life has been cast as a problem of chemistry, with the goal of identifying a plausible reaction pathway from chemical mixtures to a living entity."

Focusing on informational development helps move away from some of the inherent disadvantages of trying to pin down the beginnings of chemical life.

"Chemical based approaches," Walker said, "have stalled at a very early stage of chemical complexity - very far from anything we would consider 'alive.' More seriously they suffer from conceptual shortcomings in that they fail to distinguish between chemistry and biology."

"To a physicist or chemist life seems like 'magic matter,'" Davies explained. "It behaves in extraordinary ways that are unmatched in any other complex physical or chemical system. Such lifelike properties include autonomy, adaptability and goal-oriented behavior - the ability to harness chemical reactions to enact a pre-programmed agenda, rather than being a slave to those reactions."

"We believe the transition in the informational architecture of chemical networks is akin to a phase transition in physics, and we place special emphasis on the top-down information flow in which the system as a whole gains causal purchase over its components," Davies added.

"This approach will reveal how the logical organization of biological replicators differs crucially from trivial replication associated with crystals (non-life). By addressing the causal role of information directly, many of the baffling qualities of life are explained."

The authors expect that, by re-shaping the conceptual landscape in this fundamental way, not just the origin of life, but other major transitions will be explained, for example, the leap from single cells to multi-cellularity.

In addition to being a post-doctoral Fellow at the Beyond Center, Walker is affiliated with the NASA Astrobiology Institute in Mountain View, Calif., and the Blue Marble Space Institute, Seattle.