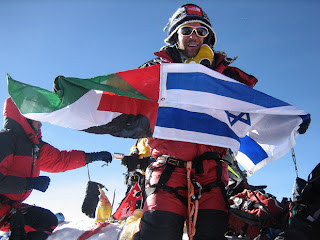 Has it never occurred to the dead enders that their game has allowed a strategy of outright absorption of all the lands of the .  All needs to do unilaterally is to designate three Palestinian urban enclaves connected by a transportation corridor between them.  One such enclave would be the urban portion of to the Egyptian border providing a port of entry on the Sea and into , A second enclave as part of and a third enclave on the border of providing access to and a conduit to the Mediterranean for .

Once the enclaves are defined, the remaining land can then be outright absorbed into proper along with any Palestinians therein.  This leaves the Palestinians with three effective city states which can actually prosper economically.  The Palestinians outside the enclaves will have the option of becoming Israeli and join an already thriving community in or moving to the urban centers as their choice.

All three enclaves could quickly build upward to create ample housing for the population.  What is more three such urban centers would establish the uniqueness of Palestinian Arab culture under the protection and guarantees of and clearly separate from either or .

In time as tensions ultimately evaporate since the issue is now settled, the borders will open up and all will thrive.

Curiously, this can be applied unilaterally now by through redefining the new future borders of the three enclaves and the outright commencement of the building of the transportation corridor including rail and road.  It is the building of the road and rail that will focus everyone’s mind on the idea that this may just be it.

There will be howls over the land takeover and the reshaping of any number of internal borders, yet it can be presented as the new bargaining position and just proceed as if it were accepted.

Again do recall Stalin’s solution to the German, Polish and Russian question.  He used mass transportation to simply separate the three communities into viable countries.  The same thing was done to separate out the Indian Subcontinent.  It is never perfect and not everyone actually moved but it does hugely temper further conflict.  Those borders are settled.

If the Palestinians want more, they have to come to the table as honest participants prepared to settle.  It is their failure to do so that has reduced their prospects from the beginning.

Israeli mountaineer David ''Dudu" Yifrah displays the Palestinian and Israeli flags on the summit of .

According to the CBC, 87% of Canadians approved the elevation of to observer status at the United Nations last week, and disapproved the stance of the Canadian government opposing this move. I assume that the CBC poll is reasonably professional, (unlike these jokey polls the Star likes to cite, including in matters related to me, in which recorded telephone conversations are randomly launched in small numbers around metropolitan areas, producing whatever results the Star seeks). Presumably, Canadians approve a two-state solution and think that this is just a positive step in that direction. And even the comments of respected commentators in the National Post, such as Jonathan Kay and my dear friend David Frum, tend to strengthen that view.

While I do not fault the CBC’s poll, and know that it’s anchor, Peter Mansbridge, is a fair and knowledgeable man, the CBC, like the other leading media outlets in Canada, have allowed Canadians to become drowsy from the inhalation of Palestinian obfuscations.

The Palestinians have ingeniously retreated to a two-track strategy of miring the shop-worn, flea-bitten, hacked and torn peace process in such complexities that they can continue in the palsied demand for the destruction of the Jewish state while apparently only seeking to advance an innocuous step on the road to the two-state solution that almost everyone now purports to espouse. The media should have referred to, but with rare exceptions did not, and it would have required careful and attentive coverage to pierce the customary Near Eastern veils of obscurantism to notice them, the Palestinian Authority’s clarifications of the West Bank president’s comments to the General Assembly on Nov. 29.

On the morning of that day, the West Bank foreign minister, Riad Malki, issued a statement confirming that ’s admission to the United Nations in 1949 was conditional on the right of Palestinians to return to their homes. In his remarks to the General Assembly, Abbas said that had attempted in 1948 “to extinguish [the Palestinians’] being,” and that since then, has conducted “an occupation (that is) an apartheid system … which institutionalizes the plague of racism.” And the Palestinian ambassador to UN, Riyad Mansour, gave an address in on the evening of Nov. 29 in which he said of the day’s proceedings: “Today we have legislated a Palestinian state with the 1967 borders and as its capital.”

Of course, they had done nothing of the kind; 87% of Canadians were not approving any such thing. Nor were the countries of the West apart from the Canada, the U.S. and the Czechs; i.e., Australia, New Zealand, Japan, Western and Central Europe and all of Latin America, voting for the legitimization of any such series of changes to the historic and actual facts. If the three authoritative assertions of the Palestinian officials cited above (and these are West Bank spokesmen, who were voted out of office four years ago in favour of the much more extreme Hamas faction, but continue to be listened to because Hamas is too much for all but neo-Nazis to endure, acoustically or otherwise, for very long), are analyzed, they produce a quite different outcome than the assumption by the Palestinian Authority of observer status at the United Nations.

It emerges that the founding of Israel in its genocidal assault on the Palestinians, was the moral equivalent of the Nazi Holocaust’s assault on the Jews in its genocidal assault on the Palestinians; that Israel is not a democracy but an apartheid state not morally superior to the former racist regime of South Africa, that all designated former residents of Israel and their professed descendants may return to Israel and demographically inundate that country so Jews are again in their accustomed minority role, in which they have been mistreated since thousands of years before the birth of Muhhamad (or Jesus Christ), as a minority in what the United Nations created 64 years ago as “a homeland for the Jews;” and that this Muslim-majority Israel will return to the 1967 borders, (altered in that year only by the premeditated aggression and unsuccessful war-making of the Arab powers), and Jerusalem will again be severely divided, with holy Jewish sites such as the Western Wall in the tender and demonstrably tolerant hands of Muslim clerics. The galleries of the General Assembly had been diligently packed, with the complicity of UN officials, on Nov. 29, with organizations selected by the UN Division for Palestinian Rights.

What occurred was another monumental disgrace and a mockery of truth, law and the facts on the ground. To restore these banished ingredients, let us recall that the British effectively promised a homeland to the Jews in without compromising the rights of the non-Jews there, in 1917, before they had even evicted the Turks as the occupying power. The United Nations created Israel as a Jewish state and to the extent Israel exceeded the minimalist borders accorded the State of Israel by the UN, it was because the Arab powers defied the unanimous decision of the permanent members of the Security Council and heavy majorities in the Council and General Assembly and attacked the nascent Jewish state, which defeated the Arabs, despite the long numerical odds against them. It is impossible to discern which Arabs fled the war zone of the former Palestine voluntarily, which from the Israeli militias, and which on the urgings of the Arab leaders, and from which part of the Palestine mandate so the return 64 years later, of all of this vastly proliferated group of claimed fugitives to the Jewish state is nonsense from every angle.

The treatment of Arabs in Israel has been less generous than the treatment of the state’s official religionists, but it has vastly exceeded in prosperity and civil rights the life Arabs have had in any other country in the region, except some in the petro-states and the Christian Arabs in Lebanon, when they have not been fighting for their lives against their Muslim fellow-citizens. Israeli Arabs vote and speak freely and the earlier unsubtle efforts of to encourage them to seek residence elsewhere have been abandoned. Israel has never operated an apartheid regime, even in territories occupied after the failed Arab aggression of 1967.

The fact that even reasonable people and countries have been gulled or worn down by this latest campaign of sophistical anti-Semitic trickery leads me to think that Israel should declare a Palestinian state: a narrower West Bank, a deeper Gaza, a clear access between them, the Christian and Muslim sites in Israel maintained by Americans, Germans, Indonesians and Malaysians, a Palestinian capital in East Jerusalem, as long as the main city is intact as Israel’s capital; the right of Palestinian return to the new Palestine and no negotiations about anything with anyone who does not recognize Israel’s right to exist as a Jewish state.

And there would be a clear understanding that any terrorist attack would continue to be replied to with an attack on the leadership of the initiating entity; any war-level combat would bring massive retaliation, and (since Obama is unlikely to do anything to prevent the nuclear arming of Iran), any attack with biological or nuclear weapons on Israel would cause the nuclear counter-obliteration of the entire population of the aggressor country; two eyes for an eye, all the teeth for one and no more effete Western snobbery about disproportionate responses. This isn’t the elk season; it’s the survival of the Jews.

Of course the Palestinians can have their country, and the Jews must finally be secure in theirs, and the process must not be retarded any longer with Arab exploitation of the distracted and lazy fatigue of Western countries that should know better than feebly to equivocate. At least 87% of Canadians should be proud of the position Stephen Harper and John Baird have taken on this issue.

Why not just give the palistinians what they love, and thus presumably want? Then everyone would be happy. And what do they love?

Enter the three words we, love, and death into any search engine and you will find out who loves death.