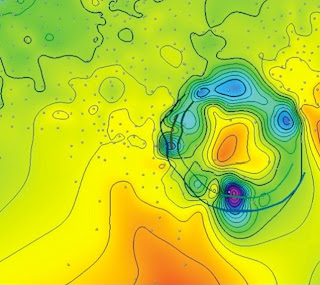 This crater at five miles is much smaller that the Yucatan event which was 110 miles across. It still produced an awful mess and sent a powerful shock wave around the globe.

Slowly but surely we are beginning to unearth these old craters. We know looking at other bodies, that plenty more are out there. Were glaciation did not take place, and sediments accumulated, we have ideal collection country. The Great Plains is one such.

Detailed mapping could give us a true measure of event frequency.

SAN FRANCISCO — An extraterrestrial impact crater is hiding near a Canadian ghost town. Nearly 5 miles across and 3,000 feet deep, the stealth crater has lurked just west of Bow City, Alberta, for millions of years.

Since the 1930s, some had suspected a bit of odd-looking, fragmented terrain in the area sat atop something bizarre. Turns out, there’s a crater underneath.

“I was really surprised,” said Wei Xie, a graduate student in geophysics at the University of Alberta, who presented the find on Dec. 3 at the American Geophysical Union conference. So far, Xie says, only a handful of these buried craters are known. That’s likely to change. “Our technology is really improving,” she said.

Xie and her colleagues peered beneath Earth’s surface using data from boreholes drilled into the area and seismic wave surveys. Sent into the ground, seismic waves bounce off the boundaries between layers of different types of rock and help scientists identify the structures beneath. Interpreting the seismic data – which came from oil companies – revealed the subterranean pockmark. And, like many of the solar system’s most notable impact scars, the Bow City crater even formed the characteristic central peak, visible in the seismic data.

Because of the crater’s placement near the surface, scientists suspect the asteroid impact that formed it occurred less than 70 million years ago. “It’s relatively young,” Xie said. But the structure is still old enough to be covered completely, and is invisible unless you’ve got seismic superpowers.

While the seismic data is compelling, Xie says definitive proof of the crater’s presence hinges on the existence of telltale shocked minerals near the impact site. She and her colleagues are hoping to drill into the area in early 2013, retrieve buried samples, and examine them for these shocked rocks.