They Know it is Christmas in China 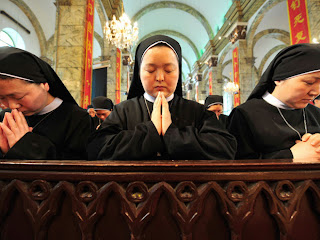 The genius of Christianity was in the celebration of Christmas itself as a showcase of Christian thinking. What it does is that every year, every child is drawn into a cycle of gift giving that is impossible for families to resist. And once begun, it becomes a pattern and way more importantly, that child remains sympathetic to christian teaching.

In a vacuum of spiritual teaching, there is still Christmas.

A successful university experience does include investigating many viewpoints, so it is little surprising to see plenty of activity there. Whatever the case, the government is typically nervous and walking on eggs as they should.

In the meantime, the Chinese Government need only look next door into South Korea to glimpse the future. That country is well on the way to becoming a majority christian country.

At the same time, I think the government really does not have a strategy to stop the process itself and plenty of experience in how repression fails miserably.

Sooner or later, Chinese political life will rationalize and we all know pretty well what it will look like even if they are waiting for a few more of the old boys to die out. At that point, freedom of religion is easily and safely granted. A government secure in the support of the people has no reason to fret over religion.


Christmas will be more widely celebrated in China this year than at any time in memory. Everyone who claims any knowledge of the subject believes that the number of Chinese Christians has been growing steadily over the last decade. Communist bureaucrats harass Christians, isolate them, try to manipulate and divide them. And yet by the standards of recent decades, Chinese Christianity now seems remarkably resilient.

No one knows how many Chinese are Christian. The State Administration for Religious Affairs, which supervises all religion, says there are about 25 million, apparently the government’s optimistic understatement. Christian activists, on their many blogs, claim 50 million to 100 million. The Global Religious Landscape, a demographic study released this week by the Pew Research Center, estimates 68 million, based on 2010 data.

Whatever the real number, no one denies the memorable comparison made on the BBC in September by Tim Gardam, a journalist and principal of St Anne’s College, Oxford: “There are already more Chinese at church on a Sunday than in the whole of Europe.”

Since about 1980, the Chinese government has directed toward Christians a relatively moderate but still annoying and persistent form of religious oppression. The meager results of its efforts are heartening: Having been subjected to the most extreme and degrading forms of government harassment and directives over three generations, many Chinese nevertheless insist on making up their own minds about issues they consider important.

Brent Fulton, a life-long China-watcher with a PhD in political science, runs ChinaSource, a Christian nonprofit based in Hong Kong. Recently he remarked that Christian parents, like many other Chinese parents, dislike the narrowly technical education many schools in the country offer: “You’ve got Christians now setting up schools — primary schools, kindergarten, home-schooling networks. There’s a movement of Christian families even sending high school students abroad for study in a Christian high school.”

These developments have frightened the power centre. A 9,000-word document on the prevention of campus evangelism was issued last year by the Central Committee of the Communist Party, but leaked only this week. It claims that foreign governments are using Christianity to infiltrate higher education and create “ideological and cultural erosion” in China.

The document gives off an aroma of paranoia that makes it, despite the clotted prose, fascinating.

The Central Committee claims that US-led elements “market” their ideas under the guise of donating funds for education, academic exchanges, etc.

“The college years are a critical time in the establishment of a person’s worldview, view of life and system of values,” we are told. The goal of the alien forces “is not just to expand religious influence but more to vie with us for our young people, our next generation.”

Infiltration is growing more intense, the Central Committee warns: “You must not underestimate the current harm and the long-term effect of such phenomenon, and you must take forceful measures.” It orders local governments, “Public Security organs” (police) and universities to treat education as an ideological and cultural battlefield where China’s political stability must be ensured.

Among the recommendations: Universities should strictly control religious personnel entering China, and they must not invite foreign professors who might be tempted to proselytize. For some years foreign teachers with Christian affiliations have been required to promise in writing that they won’t talk about religion when they lecture at Chinese universities; that precaution has apparently proven insufficient.

So Chinese embassies around the world will report on possibly dangerous teachers. The Ministry of Education will set up a data bank to circulate information about religious organizations infiltrating institutes of higher education. Instructors who insist on proselytizing will be fired. If sites of religious activity are established near universities, Public Security organs will abolish them.

The regulations of the State Administration for Religious Affairs forbid public praying, hymn-singing and other “religious activity” except in officially designated places of worship. But many thousands of unauthorized “house churches” have sprung up, offering energetic and charismatic worship that proves particularly attractive to the young. In recent years the house-church movement has moved beyond its rural beginnings and found new adherents in the cities. House churches are mostly ignored by the authorities but may be closed down if worship spills out into the streets.

Indeed, Chinese functionaries would love our college campuses. In most cases, “Marxist atheism” remains popular — Arguably more so than in China itself.