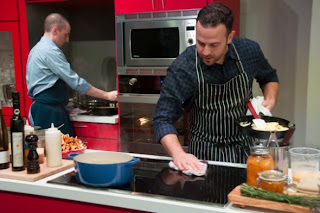 The advent of new magnetic materials have made induction heating both practical and attractive. Thus the new generation of cooking systems that also include convection ovens and really good microwave ovens, although their propensity to fry up when you make a mistake and put metal inside will continue to haunt consumers. Someone needs to think out a sensor system to prevent that.

It is all getting much better, not that we are not utterly spoiled now.

I suspect that those cast iron pots and pans will even come back into vogue regardless of the weight. No other pot system actually matches cast iron mainly because the process of seasoning puts in place a cooking surface of elemental carbon which is perfect and usually stick free. Attempts to imitate all that are never stable.

Cooking With a Magnetic Field?

We had a chance to see Panasonic’s new suite of 2013 kitchen appliances, including an induction cooktop, at a recent event featuring Craig Harding, executive chef and owner of Campangnolo restaurant in Toronto.

Panasonic’s inverter technology microwaves have been a kitchen staple, but the company has just begun to produce a full line of cooking appliances in North America.

The microwave, convection oven, and cooktop all match beautifully with the expected sleek glass and chrome finishes and the unexpected matching blue light burners and displays.

But looks aren’t everything. These appliances have serious gadget-geek appeal.

The jewel in the crown of Panasonic’s new appliances is the induction cooktop.

“I love this type of cooking,” says Chef Harding.

If you are a serious cook like Harding, you can think of induction cooking as a type of cooking that offers instant control of heat while being faster and more accurate than gas cooking, with no flame to accidentally extinguish.

Induction cooking is also the most energy efficient. What we are used to is heat-transfer cooking, where an electric element or a gas burner transfers heat to pots and pans. Energy is lost in the transfer, not just between the element and the pot, but also into the kitchen air and sometimes onto your fingers. Ouch!

Induction cooking heats the vessel itself directly. In other words, the pot cooks the food.

Under the cooktop’s smooth glass surface are copper coils. An alternating current passes through the coils, creating a magnetic field that moves current through your pots and pans, heating them up but ignoring the glass cooktop, your fingers, and anything else that has very little iron content.

If the stovetop gets warm, it is because of heat transfer from the pot. The stovetop cools down a minimum of four times faster than a conventional stove.

Because the induction stovetop is perfectly flat, it is very easy to clean. And whatever you spill doesn’t get baked onto the stovetop either—it stays cool because it’s not metal, get it? You just wipe it off.

“When things boil over you wipe it up, and it’s perfect!” exclaimed Harding as he lifted a cast iron pan of scrambled eggs off the stovetop and deftly picked up some strays that had leapt from the pan.

What makes Panasonic’s induction stovetop so precise is the addition of infrared sensor technology. The sensors can tell exactly how hot the food is inside the pot and make split-second corrections.

“The recovery time is so fast,” says Harding. As soon as something cold is added to the pan, the sensor tells the cooktop to respond, keeping the temperature perfectly even.

“It takes out the variables and guesswork,” explains Harding.

What does he mean? Precise, even temperature ensures that every pancake is the same colour, every piece of fried chicken is golden on the outside and cooked on the inside, your hollandaise sauce doesn’t separate, and you’ll probably improve your low-fat, healthy cooking too.

If all you can do is boil water, it does that four to five times faster than any other type of stove. Speed heating and sensor technology working together to create serious responsiveness.

The sensor can also tell when a pot boils dry or is lifted off the stovetop, making it extremely safe.

Because the whole system uses ferromagnetism, you must cook with stainless steel or cast iron. Glass cookware, copper pans, and aluminum won’t work. You can look for cookware with the induction cooking symbol, but chances are most of your pots will work. Hold a magnet to the bottom of the pot or pan. If it sticks you’re probably fine.

You couldn’t pair such an interesting cooktop with a lukewarm oven, so Panasonic’s sibling oven is state-of-the art.

First of all, it’s a convection oven, so already everything you bake will rise higher and bread will be crustier. When you roast or broil it is going to be crispy on the outside and juicy on the inside.

“It’s much more advanced than the one I have at the restaurant,” says Harding.

Unlike his industrial convection oven, the results Harding got from the Panasonic were perfectly even.

Panasonic has added a twin set of fans and a secret “third burner” to make sure the oven delivers precisely the same temperature to all corners.

Most microwaves have a single level of power. That single output level turns on and off while the food spins—those intermittent groans you hear means the cooking apparatus is turning on and off.

The result is uneven cooking, with rubbery food on the outside, and undercooked food on the inside.

The Panasonic model we saw has three different output levels that are delivered constantly to the food.

The more sensitively tuned frequencies penetrate the food, helping cook it evenly all the way through. This method is more likely to maintain the natural texture and colour of food.