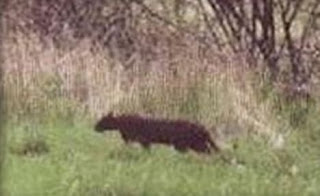 The reality is that folks have been keeping inappropriate large cats as pets for as long as it has been possible. In England, that surely goes back to even Roman times. That leads inevitably to a release simply because the same impulse to keep a pet always makes it almost impossible to take responsibility to put it down when it becomes necessary.

What is not likely is a sustainable breeding population and we have slim evidence of that. Otherwise we have hungry pets who easily revert to instinct and will generally thrive however unlikely you may think that to be. There is just too much game out there to go after, and no one has ever needed to teach a cat to stalk and kill.

So I think that we can put the mystery part aside and let them live out their lives while keeping the rabbits under control.

For decades, people all across the United Kingdom - from the cold northern realms of Scotland to the southern-most borders of England – have reported sightings of large cats, very often the size of mountain-lions and equally often completely black in color.

Their many and varied colorful and memorable names include the Beast of Bodmin, the Essex Lion, the Surrey Puma, and the Beast of Exmoor.

Needless to say, no-one should be seeing any such creatures – anywhere at all – in the wilds of the UK. And yet people do see them, on no less than dozens and dozens of occasions each and every year. So, since Britain has no large, indigenous cats in its midst at all, this begs a very important and big question: where are the cats coming from? Let’s see…

If someone had said to me, before I embarked upon my quest for the truth about the big cats of Britain back in the 1990s, that I would find myself digging into the accounts of a man known as the Lion Man and his pal, One-Eyed Nick Maiden – whose moniker made him sound like something straight out of the pages of Treasure Island or the latest installment of the Pirates of the Caribbean franchise - I would probably have merely smiled and forgotten all about it.

But sometimes truth really is stranger than fiction.

Dudley’s Lion Man – or Louis Foley, who died a couple of years ago, to give him his real name – claimed to have been personally acquainted with a number of people who had stealthily released big cats into the heart of England’s expansive Cannock Chase woods in the 1970s; largely as a result of the significant changes that were made, in 1976, to the Dangerous Wild Animals Act that regulates the keeping of exotic animals in the UK.

I met Foley midway through 2000, while co-writing a column on strange mysteries for a now-defunct English newspaper called The Chase Post. His fascination with big cats began back in the 1970s, when he purchased his first lion, ostensibly as a “guard dog.”

Astonishingly, Foley’s interest eventually resulted in him possessing an absolute zoo of exotic big cats, including seven lions, plus tigers, pumas, panthers - and nothing less than a crocodile, too!

According to Foley’s own, personal recollections of that long-gone era: “Heartless cowards who bought panthers and other big cats as fashion accessories soon realized what a handful they could be. They were left to die in areas like the Chase and many of them would have perished because they were tame. But I have seen tracks and evidence of kills that proves there are many that survived.”

Foley added, somewhat guardedly, that his friend, One-Eyed Nick Maiden, personally released both a panther and a cougar, after they had been given to him when their owner became completely unable to cope with caring for the beasts.

Foley said: “I was away at the time and I was furious, but One-Eyed Nick had no choice; we just did not have any more room. I would never release a ‘tame’ big cat because I have respect for them and keeping one is like having a child. You have a responsibility to look after them. When I heard about them being released, I would travel in the area and try to recapture them in case they could not survive.”

In conclusion, Foley stated: “If people could no longer look after the big cat or could not afford to keep them – and did not want them put down – an area like the Chase would be an ideal place to release one. I lived with my big cats for years and I would assure Chase folk there is no danger to their lives. Wild cats will avoid humans.”

While there is no doubt in my mind that Foley’s words do explain at least some of the stories of large cats prowling around the UK – particularly from the 1970s onwards – they cannot explain the earlier reports, some of which date back to the 1940s and 1950s. And then there are even older reports that date back centuries.

So, I’m confident that we have a few of the answers, but, to a significant degree, the mystery of Britain’s big cats remains.

Nick Redfern is the author of many books on strange creatures, including Monster Diary, Wildman, Memoirs of a Monster Hunter, Man-Monkey, Monsters of Texas (with Ken Gerhard), There’s something in the Woods, Three Men Seeking Monsters, and the forthcoming 2013 release, The Monster Files.