From Dream to Reality in the Philippines 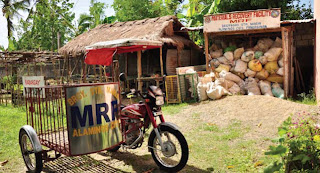 What this teaches us is that waste management is a local distributed problem and that solutions need the same structure. The more we deviate from understanding just that, the more likely abnormalities will occur. Inducing individual effort nicely collapses the end costs.

Even better, this shows us that these protocols can be applied universally.

So much human capital has been expended on the urban environment, it has been forgotten that best practice will evolve to the urban agrovillage which retains sufficient human and financial capital to optimize its life way.


From Dream to Reality in the Philippines

By Anne Larracas and Global Alliance for Incinerator Alternatives,


“Environmental Possibilities: Zero Waste” features new ways of thinking, acting, and shaping government policy that are circling the globe. Each week, we highlight a success story in the zero waste movement, excerpted from a report by the Global Alliance for Incinerator Alternatives (GAIA). GAIA is a powerful worldwide alliance of more than 650 grassroots groups, non-governmental organizations, and individuals in over 90 countries. Their collective goal is a just, toxic-free world without incineration. Other Worlds is excited to promote the work of GAIA and the organized communities it works with, and hopes that the stories inspire you and others to begin moving your home, town or city, nation, and planet toward zero waste.

The city of Alaminos is pioneering zero waste in the Philippines with an energetic fusion of bottom-up planning and community participation. Under a new law, the public and all levels of government share responsibility for managing waste. Villages, local officials, and non-profit allies are working together to meet the law’s goals. They have created composting systems and sorting facilities, and almost eliminated open burning and dumping as a result. The outcome has been stunning: whereas in 2009 almost every city dumping field had a pile burning, there were almost none two years later. With sky-high waste separation and composting rates, Alaminos has become a trend-setter for other Filipino cities.

Planning for the Future

As is typical for a fast-growing city, non-biodegradable packaging and products have become a part of everyday life in Alaminos. In recent years, non-recyclable products have spread, their problematic effects compounded by a large tourist population that brings in and disposes plastic packaging. Until recently, waste was managed almost wholly by municipal governments that typically hauled all waste to a central dumpsite.

In 2000, the Philippines passed a waste management law, known as Republic Act 9003. According to the law, the publicly elected councils of all the 39 villages in Alaminos City must implement a comprehensive solid waste management plan. The law also mandates that each village construct a recycling center, separate garbage, create a village composting system, and collect different types of waste separately. Furthermore, the law outlaws open burning and uncontrolled dumpsites.

Regardless, waste management programs at the village level in Alaminos - as in most of the country - were still non-existent by 2009. Attempting to make its villages conform, the city of Alaminos first tried encouraging, and later mandating, that they take more responsibility for waste management. Neither approach worked. Alaminos still maintained a central dumpsite, and waste was collected by the city only in 14 of the 39 villages. The remaining villages had to deal with their own waste, which led to widespread open burning and dumping. Households did not practice separating their refuse into organics, recycling, and trash. The city still rarely used the recycling center that it had built in 2004.

It became clear that the city needed to redouble its efforts and to spark community involvement and excitement in order to achieve success.

The Birth of a Zero Waste City

In August 2009, the Global Alliance for Incinerator Alternatives (GAIA) proposed a partnership with the city government. The following month, the Zero Waste Alaminos project was born. GAIA provided one staff member for the project team, zero waste trainings, and support to village leaders as they drafted their own waste management plans. GAIA also provided financial support for printing educational materials, buying shredders for organics and plastics, awarding mini-grants for villages to build eco-sheds and purchase vehicles, and more. For its part, the city provided two full-time employees, transportation for the team, logistical support for all activities and trainings, technical assistance, and support in strategic planning for the villages.

After two years, ten villages had achieved full compliance with the 2000 waste management law. Five were very close. Many others were well on their way. The zero waste team had launched rapid-fire initiatives to create these results, including: conducting a comprehensive survey to assess the existing waste management practices throughout Alamitos, traveling to all 39 villages where they interviewed village chiefs, and holding workshops for village representatives and city officials to begin conversations about waste separation and collection, composting, relevant law, and the components of the Zero Waste Alamitos project.

After the workshops, the team held 14 months of technical consultations and assemblies in the villages themselves. They resulted in a complete waste management plan, including a calendar of activities, investment plans for infrastructure, a budget with funding, and clarity about who was responsible for what. The plans were presented in assemblies for residents to comment on and approve before being implemented as the blueprint for each village’s waste management program. Once the villages had formulated their own waste management programs, they took ownership of the project.

The project team held separate sessions to consult with a range of stakeholders – from city workers to junk store representatives to health and tourism officials – to expand participation in implementing the law. As a result, resorts and inns established composting facilities and improved waste separation, tourists were informed about the  strict no-littering and waste separation policies, hospitals and clinics started to separate their waste, and schools and universities improved their recycling and composting practices.

The project grew by leaps and bounds over two years. While in 2009 almost no villages had begun implementation of the law, in 2011, 25 had local ordinances on waste management that specifically banned open burning and dumping and mandated household waste separation and composting. Ten villages passed every facet of the final evaluation with flying colors, while nine of those that did not pass were at least halfway to achieving their waste management goals.

A follow-up survey showed a high percentage of residents were separating out their waste (88% of those surveyed) and composting (53%). Fifteen villages are now consistently implementing pure composting. Worm composting has also increased, and the city has provided villages and schools with worms and organic fertilizer. Seventeen villages have started comprehensive collection systems. Thirty-two villages have built eco-sheds which provide temporary storage for residual, hazardous, and small amounts of recyclable waste, which are then collected by the city and brought to the city recycling facility.

Open dumping and burning decreased significantly: In 2009, almost every field had a pile burning; by 2011 there were almost none.

The survey also showed city government fully committed to the zero waste vision. The city has begun providing employees who were highly respected by village leaders to serve full-time as members of the project. In 2010, the city council passed into law the first zero waste city ordinance in the country, a local version of the national waste management law that includes a stronger provision against incineration and specifies how Alaminos will implement collection and conduct public education, among other things. This historic legislation upholds garbage separation, sets a target for waste diversion, and prohibits incineration.

Recently, Alaminos announced a "No-segregation, no-collection" policy. Residents will receive a warning if their waste is not separated. After a couple of warnings, their garbage will no longer be picked up. The city has already seen a noticeable reduction in the volume of overall waste. The city has considered - but  not  yet  passed - a ban on plastic bags.

Much more needs to done to implement waste management programs in the villages – two years is not long enough to reverse decades of old habits. Still, the dramatic changes underway show what is possible when communities and local government unite their commitment and their energies.