Communication Across the Vegetative State 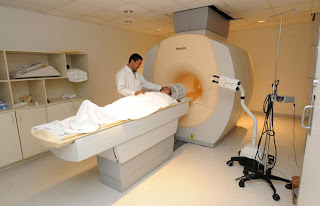 Slowly but surely we are learning to apply MRI data to query the patient. It can become effective and needs to be. Certainly we have plenty of cooperative patients here.

Using memory chains may turn out useful here. In that case a string of objects are clearly visualized and memorized. Then other data is associated with the string to establish data communication flow. I think this could be made to work.

These people are in prisons and lack sensory stimulation. It should be easy to fix that. Right now they are simply trying to ask a couple of questions.

TORONTO - For more than a decade, Scott Routley has been living in a vegetative state.
He can't talk. He can't move. And although his eyes are open, no one is sure whether he can see.

But now, for the first time, doctors caring for the 39-year-old London, Ont., man say they know he's not in pain.

And they learned it from Routley himself, by analyzing his brain waves when they asked him.

"This was a landmark moment for us because for the first time, a patient can actually tell us information, important information about how they're feeling and their current situation," said lead researcher Dr. Adrian Owen on Tuesday.

The medical breakthrough, believed to be the only time a severely brain injured patient has been able to relay clinically relevant information to their doctors, is being touted as a new way to possibly improve their quality of care.

Owen, who is the head of the Brain and Mind Institute at the University of Western Ontario, says research published online last year in The Lancet shows that one in five of these patients are conscious, but essentially trapped in their bodies because they're unable to communicate verbally or physically.

His team has been working for the past year trying to determine whether Routley, who became vegetative following a car crash 12 years ago, had any "residual brain activity" and how much he was able to understand them.

Last June, the doctors employed a functional magnetic resonance imaging machine (fMRI) to see if they would be able to analyze his brain patterns.

The thought process involved in playing a complex sport like tennis triggers the part of the brain that controls motor skills, while thinking about walking around your house triggers visual associations — contained in a separate area of the brain.

With the fMRI, doctors were able to measure the activity in Routley's brain and conclude he was trying to tell them he was free of pain.

Owen says for now, this technology is effective in determining responses to simple yes or no questions but may eventually pave the way for vegetative patients to communicate on a regular basis using a computer-assisted interface.

"We can use this type of technology to ask them what sort of entertainment they want to be exposed to? Do they want to watch TV or do they want to listen to music? What type of music? What time would they like to be fed... activities of daily living which are entirely under the control of these people around them, the people caring for them," he said.

"We can now ask the patients about these things and give them a role in the decision making that governs their life."

Neurologist Dr. Bryan Young says Routley's family has always been "convinced" that he was awake and aware in his state.

He says this technology has the potential to become an instrumental tool for the medical community to assess whether a vegetative patient wants to live or die.

But Young warned that it would only be helpful if there was a reliable test available to determine if the patient was psychologically sound, and able to make and convey their wishes.

"One has to establish, though, that apart from these simple responses to these simple commands, they are able to think in a deeper and more profound way about their quality of life and their wishes and goals and what they would prefer," he said.

Routley, who is currently living at the Parkwood Hospital in London, is among several vegetative Canadian and British patients featured in a documentary airing Tuesday on the BBC.

Really important that we begin to get some feed back from these people. The more we know and understand the more we can provide quality experiences they have chosen, Brilliant!

Far better than the Liverpool 'Care' Pathway where patients are starved and dehydrated until they die. Babies as well.