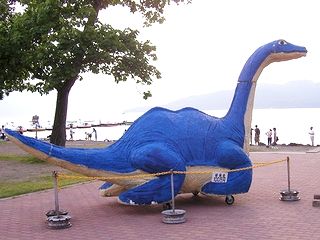 The creature is a creature of the deep that sets its egg clutches in boggy ground near the shore line. It then waits around for them to hatch and strengthen before they are taken back down to the sea.

The lakes need ready access to the sea and must be deep and generally cool to cold. Actual access need not be that easy because the creature can cross obstacles well enough.

Knowing that, I checked New Zealand and hit pay dirt. It also worked everywhere else that I was able to look. Necessarily, this was concentrated on lakes in which human habitation made observation probable.

Yet there are thousands of suitable lakes near the sea in the Boreal forests of Canada and Russia. This one happens to be on the edge of that possible habitation zone although warmer locales may turn out to be useful also provided the lake is deep enough. The problem in the tropics is that great depth is somewhat unlikely because of heavy sedimentation and little or no glacial scouring. 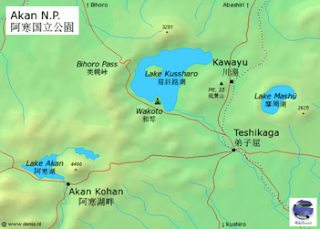 What is lurking in the waters of Japan’s Lake Kussharo?

An unknown creature, known affectionately as “Kusshi” in an attempt to emulate Loch Ness’ “Nessie,” has long been sighted in Lake Kussharo, in the nothern island of Hokkaido, Japan.

ke Kussharo is located within Akan National Park in eastern Hokkaido and derives its name from the Ainu word “Kuccharo,” which means “The place where a lake becomes a river and the river flows out.”

It is a caldera lake, formed in the crater of a volcano long ago, and is notable for being the largest lake of this kind in Japan as well as the 6th largest lake in the country overall.

It also boasts the largest island in a freshwater lake in Japan, the islet Nakanoshima, which is in fact a composite volcano. Lake Kussharo is massive for a caldera lake, being approximately 57 km in circumference and reaching depths of 117.5 meters.

A sculpture of the alleged creature by the lakeside

Kusshi is reported as being between 10 and 20 meters in length (30 to 60 ft), and the most commonly cited coloration is a dark brown. The neck is of a moderate length, and humps are sometimes mentioned. The head of the creature is said to look somewhat like that of a horse, only larger, with silver eyes, and is sometimes described as having two protrusions like giraffe horns on top. A few reports mention the creature making strange grunting or clicking noises. Interestingly, many witnesses report having felt distinctly uneasy, disturbed, or “icky,” upon seeing the creature.

One very interesting characteristic of Kusshi is the high speeds at which it reportedly can move. In 1974 footage was taken of a mysterious creature moving across the lake at breakneck speed. In Sept, 1974, a group of 15 witnesses reported being surprised by a large, somewhat triangular shaped animal with shiny skin like glistening scales, moving under the surface of the water with the speed of a motorboat. In 1988, a Mr. Takashi Murata was riding in a motorboat and reported being paced by a large animal at a distance of 15 meters away, which he described as having a dark back that looked like that of a dolphin. The animal followed him for a time, keeping up with the fast boat, before disappearing beneath the water.

Lake Kussharo’s alleged lake monster first came to widespread publicity during the 1970s due to a number of high profile sightings. In 1972, a man reported seeing an object that looked like a “boat turned upside down,” swimming quickly through the water. In August of 1973, a group of 40 middle school students on a field trip, as well as their teachers, spotted the creature not far from shore. In July, 1974, another famous case was reported by a Mr. Wada, a farmer who sighted a large, dark animal with several humps at intervals of 4 meters apart. The farmer watched the creature for some time before it submerged with a huge swell of water and a splash.

These sightings and many others like them brought attention to the lake, which culminated in an active search for the animal. For one month in Sept 1974, TV crews, boats equipped with fish finder sonar, and teams of divers explored the lake. These efforts produced some interesting results. Some of the sonar equipped boats reported finding large images at depths of 15 to 20 meters and a TV crew from the Hokkaido Broadcasting Company actually managed to catch footage of the alleged creature. Over the years, Kusshi has been photographed and filmed on several occasions, including as recently as 1990. 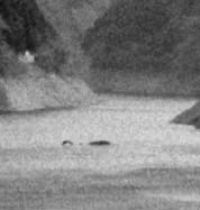 Kusshi continued to be sighted throughout the 70s and beyond, sometimes by large groups of people. In May, 1976, Kusshi was sighted by a group of 22 tour bus passengers and their driver. As recently as 1997, a group of firefighters spotted a strange animal swimming 100 meters offshore, which they estimated as being 20 meters long, with a dorsal fin and banded markings. Another sightings was made by tourists in 2002, and reports occasionally pop up to this day.

Although media attention made Kusshi famous in the 1970s, it would be a mistake to think that this was the first indication of something strange or unknown in the lake. The Ainu people who inhabit the area have long told of giant snakes that inhabit the lake. Pioneers coming to the area during the Meiji era also told of seeing these creatures, which were said to attack and eat deer whole. These stories have a long tradition among locals in the area. During the 40s and 50s, there were quite a few sightings of Kusshi as well, although these never did gain the attention that the 1970s sightings did.

So what could Kusshi be?

Lake Kussharo is itself not particularly a good habitat for aquatic life. The area is well known for its hot springs and volcanic activity, and volcanic gases bubbling up beneath the surface render the water of the lake highly acidic. In addition, a 1938 eruption in the area created a large amount of sulphur which found its way into the water. The conditions are not ideal for fish. Those that do thrive in the lake are species that are resistant to acidic water conditions, such as the introduced rainbow trout, and most fish in the lake congregate near inflowing streams which dilute the water. This limits the potential food supply and makes conditions difficult for a large animal.

One hypothesis is that swimming deer or other animals are behind the sightings. A swimming deer could perhaps fit in with some aspects of Kusshi reports, especially the general shape and presence of horns sometimes mentioned.

Another idea is that swimming horses could be the culprit. Kusshi’s head is often described as being horse like, and the creature has even been mistaken for a horse on at least one occasion. In July, 1975, a forestry worker saw what he at first thought was a horse swimming in the lake until he noticed that it was much larger than a horse as it came closer. The creature then dove below the surface not to be seen again. Could a horse or deer be behind these reports? It is an interesting idea, but the sizes reported for Kusshi are much larger than these animals and we are still faced with the reports that describe these creatures moving at high speeds.

Some point to the culprit as possibly being misidentified schools of fish such as rainbow trout, sockeye salmon, or Sakhalin taimen (Hutcho perryi), which is found in Hokkaido and is one of the oldest and largest species of salmon. It is something to consider, but would do nothing to explain the head and neck seen in many reports. Still another, more unconventional explanation, is that Kusshi could be some sort of giant slug. Kusshi has been attributed to misidentifications of motorboats as well.

There are those that have even used the surviving plesiosaur theory, and there is even a model of Kusshi found at the lake that most certainly resembles the mainstream “Nessie” image of one. However, this  most reports do not really describe the animal in that way, and this speculation seems to be an attempt to liken Kusshi to the popular image of Nessie more than anything else. Even for the Loch Ness Monster, the plesiosaur hypothesis has been largely debunked and abandoned.

This sort of thing has led some people to make the accusation that the lake monster has been played up in order to promote tourism to the area. Indeed, even now the area draws many visitors looking to catch a glimpse of something strange in the lake.

Whatever it is, Kusshi’s identity remains an interesting mystery.