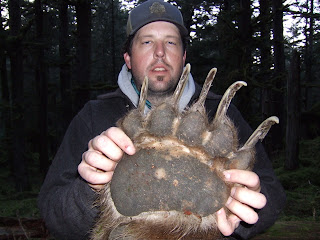 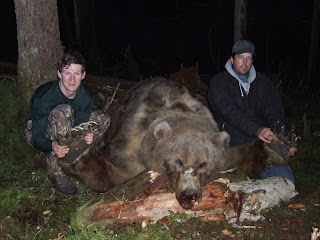 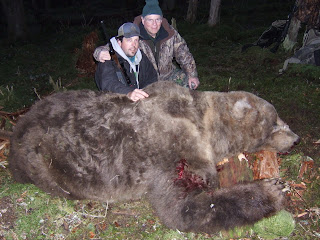 The first several pictures came to me by way of a prospector friend who got it from the hunters who nailed this giant.  It was close in weight to the record holder shown later.  I also included a Komode from Coastal Alaska.  You really do not have any good options if you meet this in the woods and it charges except to shoot straight and often.  In fact you should not even think to venture into Bear country unless you have practiced the fine art of rapid fire with a heavy rifle to a solid level of real skill.

Many do and many die.

Do note that the bear killed in was happily hunting and eating humans.   Black bears are generally pussy cats and not too swift.  A grizzly sees dinner and will instantly convert to forty miles per hour in a charge intended to take down a moose.  They are extraordinarily dangerous.  A lot of bush rats do get too comfortable in their presence, but that is an error waiting to be corrected.

They say things are big in Texas, but...

It happened like this. An unnamed Forest Service worker was out on his own time in the wilderness hunting deer. Suddenly, a large grizzly bear charged him from about 50 yards away - one moment he was enjoying his hunt, the next he was fighting for his life. The guy emptied his 7mm Magnum semi-automatic rifle into the bear, and it dropped a few feet from him. Since the big bear was still alive, he reloaded and shot it several times in the head. 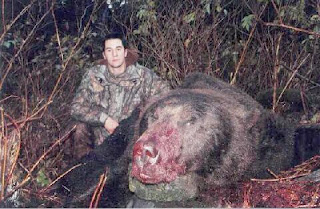 The bear was just over one thousand six hundred pounds. It stood 12' 6" high at the shoulder, and 14' to the top of his head, making it the largest grizzly bear ever recorded anywhere in the world.

Of course, the Fish and Wildlife Commission did not let him keep the grizzly as a trophy, but they will stuff and mount it, and place it on display at the airport to remind tourists of the risks involved when in the wild. 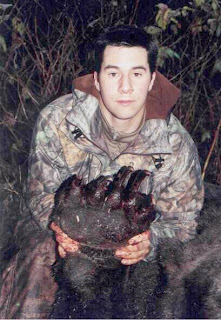 Based on the contents of the bear's stomach, the Fish and Wildlife Commission established the bear had killed at least two humans in the past 72 hours including a missing hiker. The Service backtracked from where the bear was shot, and found the hiker's 38-caliber pistol emptied, not far from the hiker's remains.  They haven't found the other body yet

Although the hiker fired six shots and managed to hit the grizzly with four (the Service ultimately found four 38 caliber slugs along with twelve 7mm slugs inside the bear's carcass), he only wounded the bear and probably really pissed it off.

The bear killed the hiker about two days prior to the bear's own death.

If you are an average size man, you would be level with the bear's navel when he stood upright.  The bear would look you in the eye when it walked on all fours!  To give additional perspective, consider that when standing on its hind legs, this particular bear could walk up to an average single story house and look over the roof, or walk up to a two story house and look in the bedroom windows.

So how big is big? 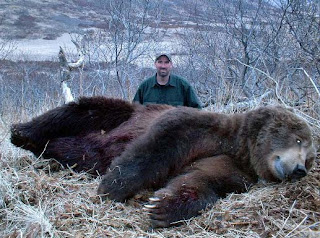 Just think, if the guys hadn't gone out into bear country to hunt bear food the bear would still be alive and the hunters would still not have a bear trophy just like they don't now.

Just think, If we hadn't gone to Iraq then 1 million Iraqis and a lot of US soldiers would still be alive and we wouldn't have won the war just like we haven't now

And where exactly have these two cretins, Anonymous one and Anonymous two, spent their lives... in New York City or L.A., or a nice, comfy suburb? Real intelligent of you to equate our involvement in Iraq, or any other American military action, with an off-duty U.S. Forest Service ranger out hunting for his family's winter food supply. Surprising as it may seem to you, many people in Alaska and elsewhere actually go out and hunt their own food in the appropriate season, unlike people such as yourselves who merely buy yours at the supermarket and leave it to others to do the slaughter and butchering of your nice ribeyes or tenderloins that you buy in those fancy trays in the meat department. And anyone who would hike out into the Alaska wilderness, or a lot of places in the lower 48, for that matter, without a very powerful handgun or rifle capable of stopping a very large animal intent on having him or her for dinner is truly a fool... kind of like the two former humans who's remains were found inside this monster's stomach. There's an actual wild world out there outside of your nice, so-called safe cities or suburbs... and there are a lot of people who live out there, and would like to keep on living. This is one example of how they do it. It's not always pretty, and you may think that it's barbaric, but that's the real world, buddy. Stop and think before putting your uninformed opinions in print so that everyone who reads it can see how truly ignorant and shallow you are. Then again... if I (or any others) have to put this in print, then it's lost on you, anyway.

Urban man easily forget that our world is only possible because we exterminated, not the Indians so much who merely had a lot of lousy luck with our pathogens, but the predators that the Indians could not handle with a bow.

black bears and boars are normally just scary and dangerous.

A grizzly is something else. It will stalk you down wind and then charge at forty miles per hour from a hundred yards if you are lucky. That gives you just the time needed to bring your rifle on target and to get a couple of shots of hopefully in a small grouping on his brain. Otherwise he will not die quickly enough before he tears you apart.

Wolves and lions and their like are just as dangerous and our lack of outright predation will allow them to become more dangerous to us even if we practice seek and destroy bad actors.

In the meantime the politically correct will makes the same old naive blunders until a family or two is wiped out.