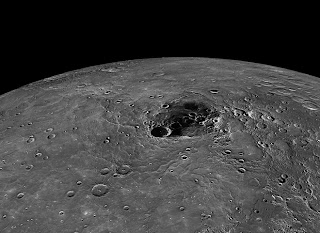 What this means of course is that Mercury is well situated for the creation of an underground habitat with ample raw materials available for sustaining life. Last week we had hard evidence that an artificial rectangular pit had been built on the surface to depth and likely to provide access to space transports and to protect them from the external flux. Unless it is somehow faked, NASA's silence on it is telling and compares to their silence on Phobos.

Been a clam is an effective strategy if you do not wish to encourage public speculation.

In 2007, I did a quick calculation regarding the decline of Arctic Sea Ice and came to the conclusion that it would reach crash and burn by 2012, not the decades everyone was touting at the time. I spent some money and put my prediction up on the wire services to see who would salute. Lo and behold, shortly thereafter, NASA released a statement say effectively the same thing. Someone did not want to look like a donkey and my wire release obviously allowed his release to go out. Needless to say the Arctic Sea Ice has done everything I expected.

My point is that NASA manages the news very carefully.

We may have a monolith on Phobos begging explanation but we also now have a Space Port on Mercury. Just when do we start admitting as much or alternatively demonstrate that we have a reason for our error?

Image: The north pole of Mercury, featuring craters such as Prokofiev (the large one) that have permanently shadowed regions and contain water ice and organic material


For the first time, scientists have confirmed that the planet Mercury holds at least 100 billion tons of water ice as well as organic material in permanently shadowed craters at its north pole.

The findings come from NASA’s MESSENGER spacecraft, which has been in orbit around the solar system’s smallest and innermost planet since 2011. Researchers have suspected that ice could exist in such craters since 1992, when Earth-based radar measurements found bright areas at the planet’s polar regions. Craters in this area cast long shadows, which prevent any sunlight from reaching their floors.

Though alternative explanations had been put forward to account for the radar-bright areas, MESSENGER has provided convincing evidence for water ice on the planet closest to our sun, where surface temperatures can sometimes reach 800 degrees Fahrenheit. The results appeared in three studies Nov. 29 in Science.

MESSENGER was able to detect water ice because it carries a neutron spectrometer that looks at energetic neutrons bouncing off Mercury’s surface. Water gives off a characteristic neutron signature.

The spacecraft measured the area around Mercury’s north pole and found this characteristic signature, suggesting that between 100 billion and 1 trillion tons of water ice was present somewhere in the area. But the neutron spectrometer has fairly low resolution, on the order of hundreds of miles, so it can’t definitively say if this water is inside the craters. (If it were outside, daytime temperatures would have boiled the water away.)

Because they contain no light, MESSENGER’s cameras can’t see right inside the permanently shadowed regions. But the spacecraft carries a useful workaround tool. To map its height above the surface, the probe uses an altimeter that shoots a 10-nanosecond infrared laser pulse at the ground and intercepts the returning beam.

“We can measure the energy that comes back from the laser,” said planetary scientist Gregory Neumann of NASA’s Goddard Spaceflight Center, and lead author on one of the Science studies. Though the number of photons coming back is slight, “we could expect to see glints of brightness from surface water ice.”

Early results from MESSENGER presented a puzzle. Not only were there no bright spots in the permanently shadowed craters where radar measurements suggested ice, the surface was actually much darker than Mercury’s average color. “We were really surprised by this,” said Neumann.

The spacecraft continued to search, examining more and more craters. Finally, the laser spotted some dazzling crater floors that were two to four times brighter than the rest of Mercury’s surface. This was finally good evidence for the long-sought water ice. By modeling the temperature in and around different craters, scientists were able to determine the northernmost craters stayed cold enough over millions of years to hold onto water ice.

Image: The topographic height of craters and surface features at Mercury’s north pole (top) and a model of the maximum amount of sunlight received in this area (bottom). Neumann et al, Science, 10.1126/science.1229764


But what about the strange dark craters? Radar measurements suggested ice, but MESSENGER wasn’t confirming the result. The temperature models showed that these craters corresponded exactly to regions that would sometimes receive a small amount of scattered sunlight. This itsy bit of energy would heat the frozen water’s surface enough to sublimate it away. Dark organic compounds dissolved in the ice got left behind as residue and would slowly form a black cover, about 8 to 11 inches thick, which protected any remaining ice from getting vaporized by random sunbeams.

The organic material is likely made of hydrocarbons like methane and ethane, commonly found in comets and asteroids. “At room temperature it would be kind of gooey stuff, to use the technical term,” said planetary scientist Sean Solomon of Columbia University, who leads the MESSENGER team. Because the layer is relatively thin, it’s invisible to radar.

The MESSENGER team now thinks they have a good story to explain how these polar cold traps work. Every once in a while, a comet or asteroid hits Mercury and gets annihilated. The vaporized material either floats out into space or gets blasted away by the sun but any that finds its way into a permanently shadowed region will settle down. Molecule by molecule, water and other compounds build up inside the craters. Those that never see a ray of sunlight contain mostly clean water ice. But if even a tiny amount of light intrudes, it may heat up the water and cause it to recede below a layer of organic material.

“These look like really good results, and I think they are very convincing,” said planetary scientist Johannes Benkhoff from the Institute of Planetary Research in Germany, who is the lead scientist on the European Space Agency’s BepiColombo mission, which is expected to orbit Mercury in 2022. MESSENGER will provide many follow-up opportunities for this later mission, which will have its own neutron spectrometer to map the water ice regions with greater resolution.

In addition to being an astounding result, the finding can help scientists better understand the history of Earth. Mercury is a terrestrial planet like our own and the ice provides evidence for geologically recent delivery of water and carbon-rich material to the inner solar system from comets and asteroids. This process very likely happened billions of years in the past, when the Earth first formed, creating our planet’s oceans and possibly seeding them with the material to produce life.

“There’s now this record on Mercury, a place where we least expected to find it, of this process,” said Solomon. “It gives us a window to understanding this delivery system.”