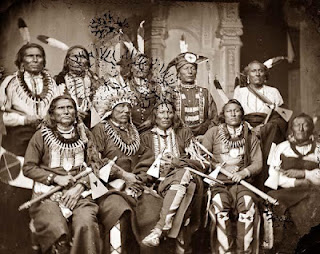 The strong linkage between these populations has always been empirically apparent. This finally settles what has been obvious and clearly establishes the time line. Thus later incursions merely topped up an already European palette.

What has been more troubling has been the avoidance of this topic from the academics. Now DNA research is systematically reducing sophism for what it truly is. Ignoring and even denying obvious evidence should be made into a capital crime in academe.

It all starts with denigrating the technical abilities of our ancients by denying them the natural wits we are all born with. We have today plenty of folks doing more with less just to show it is possible. How many row boats have to make a summer trip across the Atlantic?


Using genetic analyses, scientists have discovered that Northern European populations—including British, Scandinavians, French, and some Eastern Europeans—descend from a mixture of two very different ancestral populations, and one of these populations is related to Native Americans. This discovery helps fill gaps in scientific understanding of both Native American and Northern European ancestry, while providing an explanation for some genetic similarities among what would otherwise seem to be very divergent groups. This research was published in the November 2012 issue of the Genetics Society of America's journal Genetics.

According to Nick Patterson, "There is a genetic link between the paleolithic population of Europe and modern Native Americans. The evidence is that the population that crossed the Bering Strait from Siberia into the Americas more than 15,000 years ago was likely related to the ancient population of Europe."

[Just a second. The population that crossed the Atlantic more than 15,000 years ago had the island of Lyonese to step on from the edge of Ireland to the edge of the Grand Banks as well as ample ice to rest on. - arclein ]


According to Nick Patterson, first author of the report, "There is a genetic link between the paleolithic population of Europe and modern Native Americans. The evidence is that the population that crossed the Bering Strait from Siberia into the Americas more than 15,000 years ago was likely related to the ancient population of Europe."


The statistical tools for analyzing population mixture were developed by Patterson and presented in a systematic way in the report. These tools are the same ones used in previous discoveries showing that Indian populations are admixed between two highly diverged ancestral populations and showing that Neanderthals contributed one to four percent of the ancestry of present-day Europeans. In addition, the paper releases a major new dataset that characterizes genetic diversity in 934 samples from 53 diverse worldwide populations.


"The human genome holds numerous secrets. Not only does it unlock important clues to cure human disease, it also reveal clues to our prehistoric past," said Mark Johnston, Editor-in-Chief of the journal GENETICS. "This relationship between humans separated by the Atlantic Ocean reveals surprising features of the migration patterns of our ancestors, and reinforces the truth that all humans are closely related."