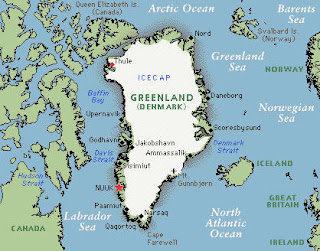 So what has really changed? The data has been adjusted better this time around? Antarctica is presently at maximum ice extent or pulse.

Of course the Northern hemisphere remains half a degree warmer and this allows a blanket loss of ice. Could someone explain just what part of Greenland is presently losing more ice than snow is adding and the reverse? How far has this boundary retreated?

Historically, these warm periods usually are good for a couple of decades at least before they reverse. Since it has become clear that CO2 is not a driver, it remains to the historical record to inform us.

What would really ruin my day is to see an abrupt return to conditions of two centuries ago.

Researchers say study is most accurate to date

Over the past two decades, ice melting in Greenland and Antarctica caused an 11-millimeter rise in the world’s sea levels, according to a new study compiled by researchers who say it is the most accurate measurement of ice loss to date.

“Both ice sheets appear to be losing more ice now than 20 years ago, but the pace of ice loss from Greenland is extraordinary, with nearly a fivefold increase since the mid-1990s,” stated Erik Ivins of NASA’s Jet Propulsion Laboratory, who helped lead the study. “In contrast, the overall loss of ice in Antarctica has remained fairly constant, with the data suggesting a 50 percent increase in Antarctic ice loss during the last decade.”[ ? - arclein]

Published in the journal Science on Thursday, led by scientists at the University of Leeds, and involving 47 researchers, the study used aircraft and 10 different satellites to measure the ice and its rate of melt. The research was backed by the European Space Agency and NASA.

The 11.1-millimeter, or 0.47-inch rise in sea levels from the polar ice sheets makes up a fifth of the total rise over the survey period. The remaining sea level rise was caused by ice melt in other places, such as glaciers and ice caps, the expansion of the warming oceans, and by groundwater mining, according to the release.

The overall rate of melting of the ice sheets in both Greenland and Antarctica has increased over time. They are now shedding more than three times as much ice—contributing to 0.95 mm rise in sea level per year—than in the 1990s, when both were losing the equivalent of 0.27 mm per year.
Advertisement

Together, the two areas lose around 344 billion tons of ice each year, researchers estimate, and of that, Greenland’s share is around 263 billion tons, which was about what they expected. The remainder was lost in Antarctica.

In previous years, there was a disagreement about the amount of ice lost, especially in Antarctica. Some studies showed massive ice loss and others even showed a gain in ice.

In this latest study, researchers were able to “reconcile the differences” among numerous previous studies on the matter, a release from Leeds University states.

One of the issues with measuring ice loss is the remoteness of the locations—Greenland is mostly uninhabited and Antarctica is entirely uninhabited, save a few scientists—and the massive size of the ice sheets. Scientists also have to differentiate between snow and ice.

The scientists said the newest study’s data is consistent with climate change predictions laid out in the 2007 Intergovernmental Panel on Climate Change. However, the latest data offers clarity that the 2007 study did not.

“Without these efforts, we would not be in a position to tell people with confidence how Earth’s ice sheets have changed, and to end the uncertainty that has existed for many years,” said professor Andrew Shepherd, head of the study.