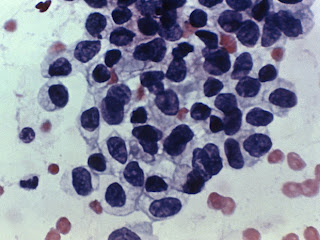 This is unexpected. Everyone thought that an errant cell took of and spread by multiplying. How about simply converting neighbors as well if not mostly. The way cancer does spread is quick and this trick makes that process possible as well as its rapid spread in the body.

The hard question is to actually stop the process itself to also stall the growth and spreading behavior in its tracks. Not as satisfactory as an outright cure but it would still work very well in saving lives.

In the meantime we have a major new research avenue.

TORONTO — Canadian scientists have made a major discovery about how cancer spreads: tumour cells appear to co-opt normal cells around them, in effect “talking” them into helping the cancer set up shop in other parts of the body.

The process, called metastasis, is what often makes malignancies so challenging to treat — and typically more deadly.

“People often think of cancer as this separate tissue, sort of like a foreign invader, a thing that’s sitting inside that’s separate from their normal body,” said principal investigator Jeff Wrana, a molecular biologist at the Samuel Lunenfeld Research Institute in Toronto.

Working with human breast cancer cells in the lab, Wrana and colleagues found that tumour cells get sets of instructions in the form of protein “messages” passed between healthy and cancerous cells.

It’s been known for a while that communication existed between these cell types, but it was thought it was akin to “words” or incomplete “sentences.”

“But what we discovered was that the normal cells were basically sending an entire paragraph of instructions to the tumour cells,” said Wrana.

“And these instructions were actually telling the tumour cells how to use its own machinery to invade and metastasize, to spread throughout the body.”

The protein that does the talking is part of tiny fragments of cells called exosomes. In cancer, the tumour cell releases exosomes to influence neighbouring cells — and those nearby normal cells secrete exosomes that help tumour cells to spread.

The researchers, who were at first surprised and skeptical of their finding, also looked for the phenomenon in lab mice bred as a model for human breast cancer.

They found the communication between normal and tumour cells also occurred in the animals. And Wrana said the same process would go on in people.


Handout/Mount Sinai Hospital/Canadian PressJeff Wrana, a molecular biologist at the Samuel Lunenfeld Research Institute in Toronto, says members of his research team were at first surprised and skeptical of their finding, but also looked for the phenomenon in lab mice bred as a model for human breast cancer. They found the communication between normal and tumour cells also occurred in the animals. And Wrana said the same process would go on in people.

“And it’s that spreading metastases, for instance to the lung, that is the cause of death for a vast number of cancer patients.”

Metastases that originate from a primary cancer site in other organs — for instance, a prostate tumour that transfers its cells into bone —likely are activated in a similar way, said Wrana, whose lab will next look for this cell-to-cell dialogue in invasive bladder cancer.

He said the discovery of the exosomes’ role is important because it gives researchers a new treatment target: “If we can interfere with that, then we can block the ability of the cancer cells to spread out of the primary site.”

The research team is looking to develop drugs known as biologics that would block this signal pathway between cells.

“Instead of only targeting the primary tumour, we can now pinpoint the cells in the tumour’s environment that are responding to the tumour and target those too,” said Valbona Luga, a co-author of the study published Thursday in the journal Cell.

“We hope to use our new knowledge of the tumour’s immediate surroundings to intercept its signals to cancer cells, and by doing so, drastically impede tumour spreading,” she said.