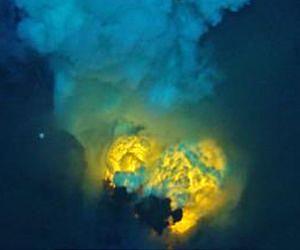 This clearly works a little better as it can explain concentration of trace elements in a given magma chamber. And what does the non melted walls of the magma chamber consist off? Perhaps it is that portion best able to transmit heat. Just what happens to the elemental carbon also?

This remains a complex problem and we are never prepared to simply accept a model as complete. everything we have came from the top hundred miles or so of rock. After that we are with the cosmos.

Anyway this is an addition to our theory.

Oceanic crust covers two-thirds of the Earth's solid surface, but scientists still don't entirely understand the process by which it is made. Analysis of more than 600 samples of oceanic crust by a team including Carnegie's Frances Jenner reveals a systemic pattern that alters long-held beliefs about how this process works, explaining a crucial step in understanding Earth's geological deep processes. Their work is published in Nature.

Magmas generated by melting of the Earth's mantle rise up below the oceanic crust and erupt on the Earth's surface at mid-ocean ridge systems, the longest mountain ranges in the world. When the magma cools it forms basalt, the planet's most-common rock and the basis for oceanic crust.

It has long been assumed that the composition of magmas erupting out of mid-ocean ridges is altered when minerals that form during cooling sink out of the remaining liquid, a process called fractional crystallization.

In theory, trace elements that are not included in the crystallizing minerals should be little affected by this process, and their ratios should be the same in the erupting magma as they were in the original magma before cooling.

If this is true, trace element ratios in magmas erupting at mid-ocean ridges should represent those of the original parental magma that formed deep in the Earth's mantle.

However, this process doesn't account for the high abundance of trace elements found in samples of basalt from mid-ocean ridges around the world, so the reality of the situation is obviously more complicated than previous theories indicated.

Using the extensive array of samples and advanced modeling, Jenner and her research partner Hugh O'Neill of the Australian National University demonstrated that the concentration of trace elements is due to the process by which the magma is cycled through the oceanic crust prior to being erupted on the sea floor at the mid-ocean ridges.

Magma collects under the Earth's surface in a pool of liquid rock called a magma chamber. Each chamber is frequently flushed with new magma, which mixes with the old magma that was already there, and then this blended magma erupts out onto the ocean floor.

Following the influx of new magma and eruption, the remaining magma undergoes fractional crystallization. This means that minerals are separated out from the magma as it cools.

However, these minerals contain only minor amounts of the trace elements. As a result, trace elements build up in the magma over time, as the magma chamber is continually replenished by new magma coming in to the system.

"It's a simple idea, but it fits remarkably well," Jenner said. "These new findings will permit us to explore the conditions of mantle melting and production of the Earth's most-common rock."