The Son of Man has Returned 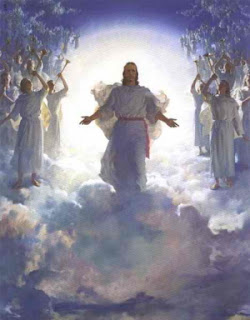 It is the Christmas Season and it is timely to share this item and my comments with you.

There is good reason to suspect that the injection of Jesus in exactly that particular time in History was a targeted intervention in Human evolution that may have succeeded in its time and place but alternatively would establish the necessary conditions for the spiritual transformation of humanity.

The early death derailed the here and now but succeeded in seeding what we now accept as the Christian ethos.  Success in the here and now would have overtaken the present political dispensation of the Jewish Hierarchy itself and preempted the pending rebellion through the rise of the new ethos.  This ethos could have quickly penetrated the and plausibly reset history on a much quicker path to modernity and global enlightenment.

That did not happen and we have suffered through the default solution.  As this writer points out that part of human evolution is nearing an end and his reintroduction is plausible and optimal. No more false starts will be necessary either as his original message is part of everyone’s consciousness.

Also it is not for the Son of Man to proclaim his status, but to live his life in imitation of the Second Coming and to be recognized for it by others.  Thus if you accept that humanity is guided through a prophetic paradigm, Christ is very much on Earth today and will be recognized in good time.

For those facing death, it is enough to recall his original dispensation to simply believe in him as your master.

As I have posted extensively on multiple related matters on my blog, I can best invite the reader to make generous use of google to search this blog for my conjectures related to GOD.

The Son of Man has returned .. Spread the word !,

Spread the word that he have return to start spreading Hope and good energy on all facebook / tweets and news article .. spread it worldwide ! to spread hope and happyness to end this dark age so everybody can live in the Age of Enlightment time to start the clean up


The Son of Man has returned .. Spread the word !

He will not return from the clouds yet because he is a living human being when he ascend .. then he will maybe return on earth from the clouds thats possible and still theorical religiously speaking


First to understand the Second coming prophecy we have to go back 2000 yrs in time ..

6 BC : Some time before Jesus' birth the angel Gabriel visited Mary and told her that she was going to have a very special baby.


6 BC : Jesus was born in , . According to the Gospels, Jesus was not the son of Joseph in the ordinary sense. He was miraculously conceived by Mary through God, without any human father. That is why Christians say that he was conceived by the Holy Ghost, born to the Virgin Mary.


7 AD : According to the Gospels, at age 12 Jesus made a visit with his parents to during the feast of the Passover. St. Luke tells us how suddenly he disappeared and eventually his parents found him in the Temple where, to their great astonishment he was holding a serious conversation with learned men that were astonished by his wisdom.


26 AD :Jesus must have been around 30 years old when he met a man called Johnthe Baptist, who had started a religious movement preparing for the coming of the Messiah, or saviour. Jesus was baptized by John in the River .
After Jesus was Baptized by John the Baptist, he took part in John's religious movement and became convinced that it was himself whom God intended to be the Messiah.


28 AD : Jesus had chosen a little group of 12 disciples, or followers called apostles, to help him in his work. He began to give them special teaching and shared with them some of his own deepest religious experiences so that they could understand fully who he was.


30 AD (Thursday) : Jesus left Galilee and returned to . Soon, he realized that his teachings had aroused opposition. Worse still, he knew that one of his own disciples was turning against him. Jesus knew that the danger was great, and he must prepare for the end.

He gathered his 12 disciples together for a final meal, Known as the Last Supper, and explained to them that his death was necessary because it would establish a new covenant between God and man, and it would be the disciples' duty to spread Jesus' teachings after he had gone. He took bread and wine, blessed it and gave it to his disciples saying, "This is my body...this is my blood". Christians remember this when they celebrate Holy Communion

(Friday) After the meal, Jesus and the disciples went to Mount of Olives, a hill on the east side of . That is the place where Judas Iscariot brought man to arrest Jesus.

They took him to the Jewish leaders for trial. The High Priest asked Jesus, "Art thou the Christ, the Son of the Blessed, and Jesus replied, "I am". Consequently, he was sentenced to death. The sentence the Jewish leaders had passed could not be carried out until it had been approved by the Roman governor of , Pontius Pilate. Pilate was uncertain what to do and after consulting the crowd he gave in and sentenced Jesus to be crucified (this was the Roman method of executing criminals by nailing them to a cross).

(Sunday) That evening (Friday) the dead body of Jesus was taken down from the cross and laid in a tomb, and a great stone was rolled across the entrance of the tomb.

Early on the Sunday morning, Easter Sunday, a group of women disciples went to the tomb and found the stone rolled back and the body gone.

Soon after this discovery Jesus appeared to Mary Magdalene and to the disciples, and the news quickly spread that Jesus returned from the dead.

Jesus' resurrection is a matter of great importance for Christians, for the Christian faith is based on the resurrection of Christ.


Jesus apparently started his ministry around 30 yrs old and was crucified around 33 yrs old .. then ascended shortly after his resurection but before his ministry/mission tour .. he was just a normal carpenter living like a normal human being.


How many understand why he let himself by crucified on the cross like that ? remaining fearless telling his friends and apostles that it was ok that show how much he loved every human out there even the bad guys knew that his sacrifice would not be in vain in the space time continuum and that his powerful wisdom would remain through the pages of time he could understand why many people acted the way they acted out of fear


How many would do the same sacrifice today for humanity ? You would need a lot of Faith and Love in you for that


The real Son of Man is so humble that if you give him a free castle with millions of dollars that he would refuse it, donate it to the poor and go live on a small farm but always ready to help anyone spreading his wisdom through the 4 corner of earth before he can have a normal life and have a family.  [not quite - he would have the wisdom to use the resources to show mankind a better way to do it all and to live well - arclein]


If people bow before him he will bow before you and tell you to get up the real Son of Man will claim out loud that he is no more important then anybody else and that he just wants humans to live in Peace and Love ready to teach humanity that the only way is LOVE. Love is fearless while hate is fearfull .. no more fear .. just Love. Love is a trillion time more stronger then hate !


His second return was foretold to happen near the End of Time (2012) by now he would be around 30 to 33 yrs old if we follow the historical accounts living like a normal human being trying to be a good soul knowing that one day people will recognise him living in humbleness, humility, kindness and complete Faith fearless with Love

Question: "What does it mean that Jesus is the Son of Man?"

Answer: Jesus is referred to as the “Son of Man” 88 times in the New Testament. A first meaning of the phrase “Son of Man” is as a reference to the prophecy of Daniel 7:13-14,
“In my vision at night I looked, and there before me was one like a son of man, coming with the clouds of heaven. He approached the Ancient of Days and was led into his presence. He was given authority, glory and sovereign power; all peoples, nations and men of every language worshiped him. His dominion is an everlasting dominion that will not pass away, and his kingdom is one that will never be destroyed.” The description “Son of Man” was a Messianic title. Jesus is the One who was given dominion and glory and a kingdom. When Jesus used this phrase, He was assigning the Son of Man prophecy to Himself. The Jews of that era would have been intimately familiar with the phrase and to whom it referred. Jesus was proclaiming Himself as the Messiah.

By definition God is an extra- terrestrial!
So are the Angels!
The Saints not so much, neither is Mary.
Jesus is a Hybrid.

I've always thought that Jesus would more likely to return as a newborn, and live out a somewhat normal life before rising as a leader. As opposed to appearing in the sky in a chariot, and dramatically flying into to claim the throne.


The idea that a single individual will be so brilliant, wise, and ethical that they will singlehanded lead humanity to a future of well being for all is one that resonates with me.

The world seems to be absolutely begging for this individual right now, and multiple fields are prime for revolutionary advancements.