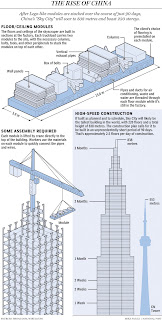 This is amazing stuff and well worth doing. The truth is that it could only have been justified in China. Our own building industry is overbuilt and under utilized and that is not a formula to drive innovation.

The technology is best applied for building structures capable of housing two hundred and providing additional work space. These could be plunked down beside any village and used to swiftly reduce the land used for housing. In that environment, the land cost becomes irrelevant. In practice it will work best if the adjacent farm land is made community property anyway.

All this avoids the problems of accessing resources to do the same thing. After all there is a pretty clear limit regarding how far a truck load of cement can be hauled.

It is clear that these modules can be put on a truck and delivered just about anywhere. This all returns to my theme that the modern city is now no longer necessary and little remains to justify its retention in terms of economic advantage. The reason for this is that information itself is now completely distributed. The same is almost true for energy delivery and the drive is on to make it effectively so.

Thus everything that I need is available to a modern apartment miles from a city center. It follows that disassembling the modern city is both feasible and actually desirable in terms of achieving a better social engineering result. We have not got there yet, but this makes it easy and fashion is fickle.

When Pierre Beaudet was told about a Chinese corporation’s plans to build the world’s tallest building in record speed — 2,749 soaring feet in just 90 days — the global studies professor marvelled Thursday: “Ah. There’s nothing they can’t do.”

Having already revolutionized construction by literally stacking factory-made modules like Lego blocks, Broad Sustainable Building Corporation is sending the world a message — not just about itself, but also about its home country: Make no mistake, China is an epicentre of technological progress and a nation worthy of awe.

“It’s a symbol of their new superiority,” said Takashi Fujitani, the director of Asia Pacific studies at the Munk School of Global Affairs’ Asian Institute in Toronto. “Modernity today is really about speed in a lot of ways, so being at the top of the world is about being able to do things fast.”

Decades ago, the United States and Russia flexed their muscles in a politically charged race to the moon; today, China is racing for the clouds. The phrase “the rise of China” is uttered so often it is almost cliched, but if Broad is successful, the country will literally rise above any other.

“It’s another frontier — on Earth,” said Mr. Beaudet, who teaches at the University of Ottawa’s School of International Development and Global Studies. “It proves their capabilities … It’s symbolic.”

The 90-day challenge starts in January, when the 220-storey tower will sprout module-by-module from a piece of farmland in the southeastern Chinese city of Changsha. Although Broad and its chairman Zhang Yue have stunned the world before — first in 2010 by building a 15-storey hotel in 48 hours and again a year later by stacking together a 30-storey tower in just 15 days — this latest creation, nicknamed Sky City, is the most audacious and aptly named: After the modules are stacked at a rate of roughly five storeys per day, Sky City will boast a hospital, a school, 17 helipads, and enough apartments to house 30,000.

“If anyone else in the world made such a claim, it would be immediately thought of as crazy,” Mr. Beaudet said. “But China is very strong in engineering and organization.”

The prefabricated tower — “prefab,” as the technique is already dubbed — will rise 10 metres higher than the current tallest building, Dubai’s Burj Khalifa, and according to Time.com it will rise a whopping 24 times quicker. For all its wonder, though, Sky City is not the culmination of Mr. Zhang’s lofty ambitions.

“Pinned up on his office wall are plans for a project even more audacious — an almost preposterously massive building two kilometres high,” Reuters Magazine recently reported. “When asked to estimate the odds of his 636-floor giganto-scraper ever being built, Mr. Zhang responds without hesitation, ‘100%!’”

The visionary chairman made a name for himself manufacturing industrial air-conditioning units, but since becoming an environmentalist and seeing poorly constructed buildings fall at the mercy of the 2008 earthquake, he has redirected his company toward what he calls a “structural revolution.”

“Traditional construction is chaotic,” he recently told Wired magazine. “We took construction and moved it into the factory.”

Just like the iconic Sydney Opera House or New York’s Empire State building, his Sky City will make a statement about the place in which it is built, Mr. Beaudet said.

“When the Empire State building went up [in 1931], the world knew about it,” he said. “It showed the U.S. had capabilities technically and financially. It wasn’t just a building. It was a symbol of real power. And I think that’s the case [with China] now.”