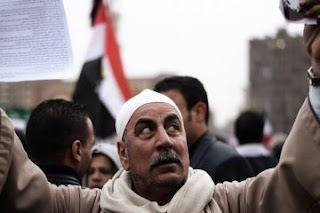 After you stop laughing, what is happening is not weird at all. It is the demos in action, a little faster than usual thanks to modern communication, but in action nonetheless. A conservative Muslim brotherhood has over played its hand and is now watching as its opposition coalesces into a strong sectarian brotherhood. We will have two strands as usual who must cooperate to get much done.

More importantly, the Muslim Brotherhood is learning the limits on its support and real power just as Mubarak did.

In the meantime the military largely stays out of sight to protect their perks as much as they are allowed.

Not much is wrong when both the old regime and the Muslim Brotherhood is chastened. We may even see a valid constitution come out of this turmoil. At that point we will have a vibrant elected government fully supported and surely a strongly subdued factionalism unable to inflict much damage.

Over and over again, the implementation of a fair democracy provides hope for minorities to find sponsorship and protection and this ends conflict. Egypt's progress from the starting gun has been actually rather swift. This present outburst has increased my faith in a successful resolution here.

Good people are rising and the demos has put its foot down which should be enough. The would be pharaohs are slipping into the night.

Things are getting weird in Egypt

An odd alliance between pro-democracy activists and Mubarak loyalists is raising eyebrows. Who is playing who?


CAIRO, Egypt — Thirty-four-year-old Sara Ebeid had never before participated in an anti-government protest.

She was a supporter of Egypt’s ousted dictator, Hosni Mubarak, and opposed the 2011 revolution.

But all that changed Tuesday night, when she joined tens of thousands of Egyptians outside the presidential palace to protest Mohamed Morsi’s new, wide-ranging powers.

Ebeid, who works for Nokia, stayed for the demonstration Wednesday night too. That protest turned violent. Clashes erupted between those for and against Morsi, leaving at least six people dead and 650 injured.

It was Egypt’s fiercest street battle since Morsi assumed office in June. On Thursday, Morsi sent in tanks to disperse the crowd.

“I never went down to Tahrir to protest with the revolutionaries because I’ve always been felool,” Ebeid said, using an Arabic word that has evolved into a derogatory term meaning “remnants” or supporters of the Mubarak regime. “But right now we have the same goal. I want Morsi out.”

Ebeid’s transformation into a protester illustrates an odd twist in Egypt’s tumultuous post uprising history. As opposition to Morsi grows fierce, an unlikely alliance is forming between pro-democracy revolutionaries and the counterrevolutionary bloc that rejected the 2011 uprising.

The latter group largely supported security crackdowns on Tahrir Square demonstrators at the time, and many voted for the pro-military candidate Ahmed Shafiq in last summer’s elections.

This most recent wave of protests emerged from a confrontation between Morsi, a former Muslim Brotherhood leader, and the country’s judiciary, which is sympathetic to Mubarak and the military. In June, The Supreme Constitutional Court voted to dissolve the parliament, which was dominated by Islamists after a democratic election.

Morsi later responded by decreeing greater powers for the presidency, allowing him to operate outside the control of the judiciary. The move was widely seen as step back toward dictatorship and protests erupted. A hastily written constitution that lacks the support of secular forces and Egypt’s Coptic Christian church, only made matters worse.
The alliance between Mubarak supporters and liberal activists was made nearly official Wednesday when three titans of Egyptian politics joined forces in opposition to Morsi.

Amr Moussa, a former Mubarak official, and Hamdeen Sabbahi, a longtime Mubarak opponent — as well as the liberal Nobel Laureate Mohamed ElBaradei — will now form the most unlikely of political coalitions.

In another surprise, pro-democracy activists have thrown their support behind the judiciary, which despite a contingent of reform minded judges, is considered a corrupt Mubarak holdover in desperate need of reform.

The majority of Egypt’s judges have halted their work in protest against the Morsi decree sidelining the judiciary. Some have announced they will boycott the judicial supervision of the constitutional referendum on Dec. 15, which is required by law.

Mervat Sameh, a 35-year-old accountant who protested outside the presidential palace Tuesday night, said it was time to put old divisions between the revolutionaries and Mubarak supporters aside.

“These people, they are standing with us now. And in this situation, when they are putting their lives and livelihoods at risk, we have to trust them,” he said.

The uneasy cooperation is not without controversy.

Some activists warily accept the participation of those that balked at the goals of the anti-Mubarak uprising last year, if only to boost the numbers at anti-Morsi demonstrations. But for them, that’s as far as the alliance goes.

“Felool supporters are Egyptians who just chose something sinister. We must win them over, but never align ourselves with their goals,” Egyptian activist, Wael Eskandar, posted on Twitter on Nov. 28.

The presence of Mubarak supporters at this week’s protests has added credibility to claims by the Muslim Brotherhood that regime loyalists and the military are conspiring to unseat the democratically elected Islamists.

Brotherhood leaders and spokespeople have been quick to paint the protests as the work of “armed thugs,” supported and paid by the Mubarak faithful.

“The constitutional court overstepped their legally imposed bounds, and [Morsi] had to react,” said Ibrahim Al Iraqi, a Brotherhood leader in the Egyptian province of Dahqhleya. “And now, anti-revolutionary forces and the remnants of the regime are inciting people to act against Egypt’s interests.”

The political demands of the new opposition — put forth by the coalition of ElBaradei, Moussa and Sabbahi — include Morsi rescinding his decree, calling off the constitutional referendum, and the creation of a new, more representative constituent assembly.

But pro-Mubarak protesters like Ebeid are clear that, no matter what, they want the Islamists far from the seats of power.

“I don’t want to talk about the constitution. There can be no negotiations about this,” she said. “I want Morsi out, I want the Brotherhood out. I don’t want any religion close to or related to the state.”