Ghandi and Self Defense 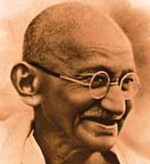 We are dealing again with another gratuitous massacre and the same crying out for gun control. The truth is that both gun control and arming everyone is a hugely expensive waste of effort and simply does not work. The reason is elementary. The perpetrator gets to pick his moment. For the above strategies to work, every rational person with the slightest authority would need to maintain weapons drill on a weekly basis at least for the rest of his life.

And by the by, as far as I am concerned, if you own a weapon, it is my opinion that it should be secured except for weapons drill and all licensing should be conditional on a high level of proficiency. The only modest relaxation would be over proper hunting gear. These are precision tools that are very dangerous and it is reckless to not have training.

In the event once again, all these proposed rules would have totally failed to prevent a single massacre. Sponsoring a clearly wrong solution is idiotic.

Instead, I would place a media ban on any use of the perpetrator's name and use a simple number. In fact I would actively remove his presence from all records so that he ceases to exist except as a case study for scientific study.

Perpetrators are driven by fantasy and in no way should we make it possible to share that fantasy. There is no public need to even have this information. The press has plenty to discuss in terms of the victims themselves.

I would even apply that rule at times at the judges discretion in the far lessor situation of convicted killers, although there we have ample prosecution failure to also deal with. My point is that no major perpetrator fantasizes about anonymity. Let us use that and also lower the frenzy while we are at it.

It may turn out that this is also ineffectual but we need to at least reduce the spin to that of an unfortunate bus crash.

Gandhi advocated the right to bear arms; use of 'violence' to defend innocents against bullying, oppression

(NaturalNews) Gandhi is known around the world as the master of "nonviolence." And yet, in the face of being threatened with bullying attacks, even Gandhi directly advocated the use of violence in the defense of the innocent. Had Gandhi been alive today and witnessed the senseless loss of life at Sandy Hook Elementary school, he would have advocated arming the principal and giving her a chance to protect innocent lives through the use of defensive violent action.


Don't believe me? Read his own words...


"I do believe that where there is only a choice between cowardice and violence I would advise violence," Gandhi wrote in his famous work, Doctrine of the Sword.

Gandhi also advocated justified violence over the "cowardice" of submission. Again, this is in his own words:

...Hence also do I advocate training in arms for those who believe in the method of violence. I would rather have India resort to arms in order to defend her honor than that she should in a cowardly manner become or remain a helpless witness to her own dishonor. - M.K. Gandhi, The Doctrine of the Sword.

Gandhi also explains that someone who cannot use violence to defend themselves or their family is a helpless coward and a "worm."


In his own words from the text Between Cowardice And Violence


...He who cannot protect himself or his nearest and dearest or their honour by non-violently facing death may and ought to do so by violently dealing with the oppressor. He who can do neither of the two is a burden. He has no business to be the head of a family. He must either hide himself, or must rest content to live for ever in helplessness and be prepared to crawl like a worm at the bidding of a bully.


[When violence] is offered in self-defence or for the defence of the defenceless, it is an act of bravery far better than cowardly submission.

In his own words, Gandhi advocated facing danger with measured violence (i.e. shooting back)

Also from Gandhi's text Between Cowardice And Violence


...A man who, when faced by danger, behaves like a mouse, is rightly called a coward.


Not knowing the stuff of which nonviolence is made, many have honestly believed that running away from danger every time was a virtue compared to offering resistance, especially when it was fraught with danger to one's life. As a teacher of nonviolence I must, so far as it is possible for me, guard against such an unmanly belief.


Self-defence ... is the only honourable course where there is unreadiness for self-immolation.


You got that? Even Gandshi advocated self defense, even if it involved acts of violence. This is why, if Gandhi were alive today, he would have advocated arming school principals to defend innocent life (the children) against psychopathic killers.

Obama wants Americans to be cowards; Gandhi wanted people to act with courage

President Obama, of course, wants to disarm all Americans and turn them into cowards... "sheeple" with no ability to defend themselves against psychopathic killers or a tyrannical government like the one Gandhi faced.


Gandhi openly advocated the opposite: Arming the citizens in the defense of the innocent.


Gandhi, it turns out, was pro Second Amendment and openly believed in the right of citizens to arm themselves in their defense against violence and oppression.


Note: Credit for the research on this article goes to David Rainoshek of:
www.RevolutionaryWebinars.com


http://www.naturalnews.com/038372_Gandhi_nonviolence_right_to_bear_arms.html#ixzz2FKZvJehX
Posted by arclein at 12:00 AM