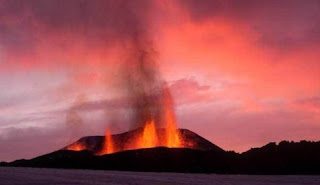 This time we actually got to see it all happening in its different phases. One is left with a truly vast respect for the actual scale of what may happen with a volcano and an understanding of how a volcano sequences through the different chambers.

I suspect that we need to go check of a lot of volcanoes to determine if a similar sequence is apparent in thee assays. This will provide us a pile of new interpretive data. It certainly makes Mt St Helen look like a tame volcano and also shows us that any volcano has serious potential to hugely out perform historical norms.

A string of chambers could sit sealed for thousands of years while the closest to the surface erupt regularly. Think Santorini as a scary example. You can be sure frequent earlier eruptions made it all appear safe, just like all the other so popular volcanoes we know and love.

The take home for all is that no volcano is safe at all. The right conditions will trigger a cascade of chambers releasing in series and bathing the countryside with ash over a long period of time. History is only a suggestion that failed in every major volcano which is why folks lived nearby.

The good news however, is that a multi chamber blow out puts the volcano to sleep for a long time.

According to NBC News, after nearly two centuries of dormancy, Eyjafjallajökull (AYA-feeyapla-yurkul) erupted many times over the course of 10 weeks. The eruptions spewed a huge plume of ash that caused extraordinary lightning displays, colored sunsets a fiery red across much of Europe, and forced widespread flight cancellations for days.

The eruptions began in 2010 when a fissure opened on the flank of Eyjafjallajökull in March, revealing that it was inflating with magma. An explosion then burst from the volcano’s summit in April, and three more major explosions from Eyjafjallajökull rocked Iceland in May.

Analysis of material spewed from the explosions suggests each explosion involved separate chambers loaded with magma of distinct ages and compositions.

To learn more about what caused this spate of eruptions, the researchers analyzed swarms of microearthquakes during the outbursts. The data suggests that the first explosion was rooted in a magma chamber about 3 miles (5 kilometers) below the surface, while the three later explosions stemmed from magma chambers at depths of about 7 miles (11.5 km), 12 miles (19 km) and 15 miles (24 km).

Interestingly, the researchers found that microearthquakes apparently occurred at greater depths with each outburst. Researchers now suggest that the series of eruptions was due to a “decompression wave” that essentially rippled downward, upsetting the volcano’s plumbing.

The initial explosion spewed a massive amount of magma and melted about 650 feet (200 meters) of ice. The researchers suggest this relieved a great deal of pressure exerted from Eyjafjallajökull’s summit on its innards. This drop in pressure from above caused a magma chamber slightly lower down to begin inflating. When this led to an explosion, this liberated magma in another chamber slightly lower down, and created a cascade through successively lower chambers.

Jon Tarasewicz, a geophysicist at the University of Cambridge in England said:

“It’s novel to have been able to match the deep seismic observations to big changes in the eruption rate at the surface. In this case, it seems the volcanic plumbing system at depth responded to changes near the surface, rather than vice versa.”

“There are several examples around the world of volcanoes that are thought to have more than one magma chamber, stacked at different depths beneath the volcano. Understanding the pressure linkage and feedback between different magma storage reservoirs may help us to understand why some volcanoes like Eyjafjallajökull have prolonged eruptions with episodic surges in eruption rate.”

Although this research could yield insights on the magma underlying a volcano and how it might behave, Tarasewicz cautioned, “we are still not in a position to be able to predict accurately in advance when, or if, a volcano is going to erupt.”

http://www.inquisitr.com/419705/iceland-volcano-eruption-caused-by-chain-reaction/#O2ygwHwltfBrtwSQ.99
Posted by arclein at 12:00 AM