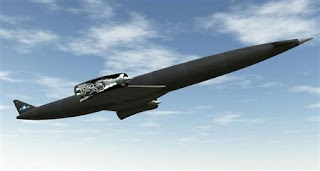 This is the problem that chilled any other group from even trying to try this approach and its outright solution is major.  We suddenly can develop and engine system able to use atmospheric oxygen to the top of the available oxygen column and then transition over to internal oxygen to complete the trip into low orbit or possibly higher.  We dreamt about but no one expected to see it solved.

Now we are looking at a family of engines able to easily reach Mach 5.5 in the upper atmosphere and either punch out into space or alternatively land halfway around the globe a mere four hours later.  Even better we are no seriously able to design huge lifters to punch mass into space.  All this on jet fuel to boot although I suspect that hydrogen is going to begin to look interesting again.

This will make it easy to build a modified Dyson sphere in High Orbit to spin up and use to build a space manufacturing complex using natural centripetal acceleration to induce artificial gravity.  All our space dreams now become plausible.

A Skylon in flight with a cutaway of the SABRE engine, in an illustration courtesy of Reaction Images Ltd.

The Skylon spaceplane — a single-stage spacecraft design that could cut travel time between any two points on the planet down to less than 4 hours — has received a boost towards its goal of achieving orbit after the European Space Agency (ESA) endorsed one of the key technologies behind the space plane's development.

Representatives from Reaction Engines Ltd (REL), the company developing Skylon and itsSynergetic Air-Breathing Rocket Engine (SABRE), tested their breakthrough heat-exchanger technology for a group of ESA experts on Wednesday, who gave their official validation of the results.

"The pre-cooler test objectives have all been successfully met and ESA are satisfied that the tests demonstrate the technology required for the SABRE engine development."

The SABRE engine being developed by REL is basically a rocket engine, like you would have on any of the multi-stage rockets now used to launch things into orbit, with elements of a conventional jet engine added on. This design would allow a spacecraft to take off just like a jet aircraft, fly up to high altitude and reach incredible speeds, switch over to rocket propulsion for achieving orbit, and then switch back to jet propulsion once it re-entered the atmosphere.

Since oxygen is needed for fuel to burn and oxygen becomes increasingly hard to come by the further up in the atmosphere you go, a typical multi-stage rocket, with its 'closed' combustion cycle engines, needs to carry a large supply of liquid oxygen with it. The SABRE engine reduces the need for an on-board liquid oxygen supply by using an air intake system, similar to a jet engine, to suck in air while the plane is at lower altitudes. Only when the plane reaches altitudes where it cannot draw enough oxygen from the air for combustion — after reaching speeds of around Mach 5.5 (over 6,000 km/h) — does it close its air intake valves. The engines then switch over to a small on-board liquid oxygen supply for 'closed' rocket combustion for the rest of the trip.

There were some big problems with this idea in previous designs. Air being injected into the combustion chamber needs to be compressed, and by the laws of thermodynamics, when you compress air it heats up. To reach the speeds needed by this plane, the air would be heated to such a high temperature that it would melt the engine. Cooling the air with a heat-exchanger before it is injected into the combustion chamber was a good solution, but not only are heat-exchangers typically very big and heavy, but they only worked well as long as there wasn't moisture in the air. Any water in the air would condense out when the air was cooled, which would collect as frost on the heat exchanger, clogging it up within moments and making it completely useless.

In the new heat exchanger designed by REL, air with a temperature of over 1,000 °C is drawn through arrays of thin, liquid-fed cooling tubes that are arranged in a highly-efficient spiral formation. The air cools down to minus 150 °C as it flows around these tubes and is drawn out from the centre of the exchanger to be injected into the combustion chamber. The whole design of the exchanger makes it extremely light and compact, and thus perfect for this kind of use.

Now, how did they avoid the buildup of frost in the exchanger? They aren't telling.

"We are not going to tell you how this works," said Richard Varvill, chief engineer for REL, according to The National Post. "It is our most closely guarded secret."

In their effort to keep this knowledge a secret, they are not even filing patents for the new technology. As the company believes that they are the only ones developing this kind of technology, their caution is understandable.

Alan Bond, the founder of REL, said in a statement: "These successful tests represent a fundamental breakthrough in propulsion technology. Reaction Engines' lightweight heat exchangers are going to force a radical re-think of the design of the underlying thermodynamic cycles of aerospace engines. These new cycles will open up completely different operational characteristics such as high Mach cruise and low cost, re-usable space access, as the European Space Agency's validation of Reaction Engines' SABRE engine has confirmed. The REL team has been trying to solve this problem for over 30 years and we've finally done it. Innovation doesn't happen overnight. Independent experts have confirmed that the full engine can now be demonstrated. The SABRE engine has the potential to revolutionise our lives in the 21st century in the way the jet engine did in the 20th Century. This is the proudest moment of my life."

With this hurdle behind them, the company now hopes to raise the funds necessary to have SABRE fully operational and ready for the market within 10 years. They also believe that their heat-exchanger technology will be useful for other applications, such as increasing the fuel efficiency of conventional jet aircraft and multi-stage flash desalination plants.