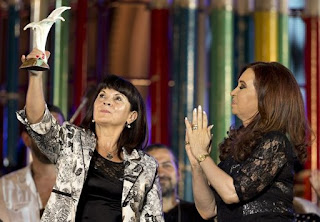 This one woman shows us the way forward. Sex slavery exists everywhere and is a profoundly criminal activity in its operation and organization. It is one thing for the willing to participate and for them legalization is necessary to avoid direct exploitation. That is still insufficient to satisfy supply so long as it is criminalized.

Yet long before the laws are ever rationalized, here is the way. One women has gone out and rescued nine hundred with no help. Now suppose this activity became church sponsored and suppose brothels were confronted with a group of women demanding access and the time to interview the victims. A dozen women on your doorstep soon changes the political dynamic with the authorities. If one woman can accomplish this much, how much can be accomplished by a volunteer female swat team.

The publicity alone will end most of the worst abuse quickly.


LA PLATA, Argentina - Susana Trimarco was a housewife who fussed over her family and paid scant attention to the news until her daughter left for a doctor's appointment and never came back.
After getting little help from police, Trimarco launched her own investigation into a tip that the 23-year-old was abducted and forced into sex slavery. Soon, Trimarco was visiting brothels seeking clues about her daughter and the search took an additional goal: rescuing sex slaves and helping them start new lives.

What began as a one-woman campaign a decade ago developed into a movement and Trimarco today is a hero to hundreds of women she's rescued from Argentine prostitution rings. She's been honoured with the "Women of Courage" award by the U.S. State Department and was nominated for the Nobel Peace Prize on Nov. 28. Sunday night, President Cristina Fernandez gave her a human rights award before hundreds of thousands of people in the Plaza de Mayo.

But years of exploring the decadent criminal underground haven't led Trimarco to her daughter, Maria de los Angeles "Marita" Veron, who was 23 in 2002 when she disappeared from their hometown in provincial Tucuman, leaving behind her own 3-year-old daughter Micaela.

"I live for this," the 58-year-old Trimarco told The Associated Press of her ongoing quest. "I have no other life, and the truth is, it is a very sad, very grim life that I wouldn't wish on anyone."

Her painful journey has now reached a milestone.

Publicity over Trimarco's efforts prompted Argentine authorities to make a high-profile example of her daughter's case by putting 13 people on trial for allegedly kidnapping Veron and holding her as a sex slave in a family-run operation of illegal brothels. Prostitution is not illegal in Argentina, but the exploitation of women for sex is.

A verdict is expected Tuesday after a nearly yearlong trial.

The seven men and six women have pleaded innocent and their lawyers have said there's no physical proof supporting the charges against them. The alleged ringleaders denied knowing Veron and said that women who work in their brothels do so willingly. Prosecutors have asked for up to 25 years imprisonment for those convicted.

Trimarco was the primary witness during the trial, testifying for six straight days about her search for her daughter.

The road to trial was a long one.

Frustrated by seeming indifference to her daughter's disappearance, Trimarco began her own probe and found a taxi driver who told of delivering Veron to a brothel where she was beaten and forced into prostitution. The driver is among the defendants.

With her husband and granddaughter in tow, Trimarco disguised herself as a recruiter of prostitutes and entered brothel after brothel searching for clues. She soon found herself immersed in the dangerous and grim world of organized crime, gathering evidence against police, politicians and gangsters.

"For the first time, I really understood what was happening to my daughter," she said. "I was with my husband and with Micaela, asleep in the backseat of the car because she was still very small and I had no one to leave her with."

The very first woman Trimarco rescued taught her to be strong, she said.

"It stuck with me forever: She told me not to let them see me cry, because these shameless people who had my daughter would laugh at me, and at my pain," Trimarco said. "Since then I don't cry anymore. I've made myself strong, and when I feel that a tear might drop, I remember these words and I keep my composure."

Micaela, now 13, has been by her grandmother's side throughout, contributing to publicity campaigns against human trafficking and keeping her mother's memory alive.

More than 150 witnesses testified in the trial, including a dozen former sex slaves who described brutal conditions in the brothels.

Veron may have been kidnapped twice, with the complicity of the very authorities who should have protected her, according to Julio Fernandez, who now runs a Tucuman police department devoted to investigating human trafficking. He testified that witnesses reported seeing Veron at a bus station three days after she initially disappeared, and that a police officer from La Rioja, Domingo Pascual Andrada, delivered her to a brothel there. Andrada, now among the defendants, denied knowing any of the other defendants, let alone Veron.

Other Tucuman police testified that when they sought permission in 2002 to search La Rioja brothels, a judge made them wait for hours, enabling Veron's captors to move her. That version was supported by a woman who had been a prostitute at the brothel: She testified that Veron was moved just before police arrived. The judge, Daniel Moreno, is not on trial. He denied delaying the raid or having anything to do with the defendants.

Some of the former prostitutes said they had seen Veron drugged and haggard. One testified Veron felt trapped and missed her daughter. Another said she spotted Veron with dyed-blonde hair and an infant boy she was forced to conceive in a rape by a ringleader. A third thought Veron had been sold to a brothel in Spain — a lead reported to Interpol.

Trimarco's campaign to find her daughter led the State Department to provide seed money for a foundation in Veron's name. To date, it has rescued more than 900 women and girls from sex trafficking. The foundation also provides housing, medical and psychological aid, and it helps victims sue former captors.

Whatever the verdict, Trimarco's lawyer, Carlos Garmendia, says the case has already made a difference.

"Human trafficking was an invisible problem until the Marita (Veron) case," Garmendia said. "The case has put it on the national agenda."

But Trimarco wants more. "I had hoped they would break down and say what they'd done with Marita," she said.

"I feel here in my breast that she is alive and I'm not going to stop until I find her," Trimarco said. "If she's no longer in this world, I want her body."