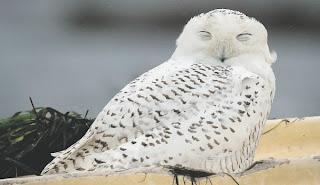 I read this story quite differently. The fact is that the recovery of raptor populations over the past forty years has been remarkable. Some may want to claim this is because of the demise in use of DDT, but I am way more inclined to assign causation to the effective end of utterly irresponsible hunting by teenage farm boys. Not only do we have less said farm boys, but they all know better.

Growing up in Mid Western Ontario back in the sixties, all game was scant. Yet I was out every day with a rifle in hand patrolling our fifty hectares of country side with a dog on hand to flush game. This was common and in the two decades that we covered, I saw a deer once, grouse once and multiple foxes and no end of groundhogs and rabbits. I was looking and catching little.

All that has now changed, not least because it is no longer fifty hectares but assembled into 500 hectares and the farm boys have been told off on hunting raptors and most game. Thus the deer are all crowding back as well as everything else. In the end, it will need management protocols to control their populations if not so already.

Record numbers of owls at a refuge in the Fraser Delta suggests record populations up country. Snowy owls are Arctic adapted to start with and more reasonably, they are expanding their range.

In any case, Vancouver has large populations of raptors because it is the focus of migrants from Alaska and BC. It is not unusual to see flocks of several dozen eagles here.


A record 485 raptors, including emaciated snowy owls from the Arctic, have been brought to the two-hectare OWL rehabilitation centre in south Delta so far this year.

“We’ve never broken 400 before,” OWL founder Bev Day said in an interview Thursday. “It tells you how bad the birds are doing.”

Loss of habitat due to development, including port expansion and the South Fraser Perimeter Road, as well as conversion of traditional farmland to blueberry production have resulted in less prey to go around, Day said.

A total of 10 snowy owls — most of them starving, but also one that flew into a power line — have been brought to the centre, not just from Delta, but from as far afield as Prince George, Pemberton, and Hope. Only one has survived.

Snowy owls are so desperate for food they have been spotted as far south as California, Day said.

The survival rate for all 485 raptors brought in this year, including eagles, hawks, owls, and falcons, is about 70 per cent.

People are phoning to report snowy owls on their house roofs, but Day said people should not be concerned unless the birds are seen on the ground and in distress. Photographers looking for the perfect shot are urged not to harass the birds by approaching too close.

Wet weather can also make it more difficult to for the birds to access prey, Day said, adding that raptors with weakened immune systems are also at risk of contracting aspergillosis, a lung disease.

She noted that development of the South Fraser Perimeter Road includes some good mitigation measures, but they are no substitute for the 90 hectares of farmland removed for the $1.2-billion development. “It doesn’t replace everything, but they are working on it,” she said.

Among the mitigation measures are wildlife tunnels and the creation of marsh habitat.

The conversion of traditional farmland to blueberry production also eliminates habitat in which the raptors might otherwise find prey, Day said. Agricultural pesticides — a poisoning risk — are also an issue.

Formed 37 years ago, OWL (owlcanada.ca) receives no direct government funding and is struggling to make ends meet given the large volume of raptors. Cash donations are appreciated, as well as contributions of wild game and fish, but not commercially processed poultry or other meats.


Pat Wagar of the Mountainaire Avian Rescue Society in Courtenay said the facility has received six emaciated snowy owls, of which only one survived. Among the other birds brought in for treatment are a long-eared owl, short-eared owl, and a brown pelican.