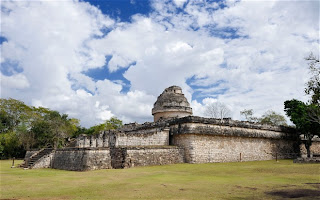 The only thing that is interesting about this date is that we understand the Mayan Calender and its link to astronomy and their marvelous system for doing large numbers. This allowed for a date in the distant future to be easily named but likely linked to an extant event as the one real point of reference. It may even be astronomical but just as plausibly honoring a ruler who came under the correct signs thus linking it indirectly to astronomy.

In the meantime it is worth noting just how well the ancients managed to study the stars and the movement of objects in the Solar System. The Mayan achievement was extraordinary.

In my lifetime, all this was successfully interpreted and ferreted out of their jungle grave yards.

Mayas may have made some prophecies, but not about a 2012 apocalypse


MEXICO CITY - As the clock winds down to Dec. 21, experts on the Mayan calendar have been racing to convince people that the Mayas didn't predict an apocalypse for the end of this year.

Some experts are now saying the Mayas may indeed have made prophecies, just not about the end of the world.

Archaeologists, anthropologists and other experts met Friday in the southern Mexico city of Merida to discuss the implications of the Mayan Long Count calendar, which is made up of 394-year periods called baktuns.

Experts estimate the system starts counting at 3114 B.C., and will have run through 13 baktuns, or 5,125 years, around Dec. 21. Experts say 13 was a significant number for the Mayans, and the end of that cycle would be a milestone — but not an end.

Fears that the calendar does point to the end have circulated in recent years. People in that camp believe the Maya may have been privy to impending astronomical disasters that would coincide with 2012, ranging from explosive storms on the surface of the sun that could knock out power grids to a galactic alignment that could trigger a reversal in Earth's magnetic field.

Mexican government archaeologist Alfredo Barrera said Friday that the Mayas did prophesize, but perhaps about more humdrum events like droughts or disease outbreaks.

"The Mayas did make prophecies, but not in a fatalistic sense, but rather about events that, in their cyclical conception of history, could be repeated in the future," said Barrera, of the National Institute of Anthropology and History.

Experts stressed that the ancient Mayas, whose "classic" culture of writing, astronomy and temple complexes flourished from A.D. 300 to 900, were extremely interested in future events, far beyond Dec. 21.

"The king of Palenque, K'inich Hanaab Pakal, believed he would return to the Earth a couple of thousand years from now in the future," Braswell wrote in an email to The Associated Press. "Moreover, other monuments discuss events even before the creation in 3114 B.C."

Only a couple of references to the 2012 date equivalency have been found carved in stone at Mayan sites, and neither refers to an apocalypse, experts say.

Such apocalyptic visions have been common for more than 1,000 years in Western, Christian thinking, and are not native to Mayan thought.

"This is thinking that, in truth, has nothing to do with Mayan culture," said Alexander Voss, an anthropologist at the University Of Quintana Roo, a state on Mexico's Caribbean coast. "This thing about looking for end-times is not something that comes from Mayan culture."

Braswell compared the Mayan calendar, with its system of cycles within cycles, to the series of synchronized wheels contained in old, analogue car odometers.

"The Maya long count system is like a car odometer," Braswell wrote. "My first car (odometer) only had six wheels so it went up to 99,999.9 miles. That didn't mean the car would explode after reaching 100,000 miles."