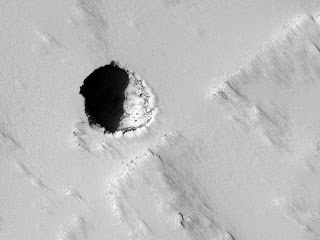 Devising a robot able to operate in a cave, or more properly, a lava tube is going to be a real stressor on engineering capabilities here on Earth where it must be proven first. I suspect we will have boots on the ground first.


To work well it will require a six limb system with some effective grasping ability on each to say nothing of a management program with independent capabilities. Going there is likely easier and way more flexible.

On the other hand it is a good target to aim for.

NASA is mapping out a strategy to return bits of rock and soil from the Martian surface to Earth, but the most intriguing Red Planet samples lie in underground caverns, some scientists say.

The space agency's next steps at Mars are geared toward mounting a sample-return mission, which is widely viewed as the best way to look for signs of Red Planet life. Such signs are perhaps more likely to be found in material pulled from the subsurface, so some researchers hope NASA's first Martian sample-return effort won't be its last.

"While I'm very much interested in a surface sample-return to get us over this hump of doing it, of course I immediately want to go on and start sampling more cryptic materials in lava-tube caves," said astrobiologist and cave scientist Penny Boston, of the New Mexico Institute of Mining and Technology in Socorro. "I would love that."

Subterranean formations are quite common on Mars, Boston said. Orbiting spacecraft have spotted many snaking lava tubes, for example, which were created by long-ago Red Planet volcanism. [Photos: Mars Caves and Lava Tubes]

"I could probably scrape up a few hundred examples on Mars, and I think that the numbers are only going to increase as the interest in these structures increases," Boston told SPACE.com.

Such caverns may preserve a bounty of information about Martian history and evolution, including its past and current potential to host life.

"Something like the lava tubes could be wonderful traps for material from past climate regimes, particles from previous epochs on Mars," Boston said, noting that liquid water is known to haveflowed across the Martian surface long ago.

Lava-tube caves on Earth commonly trap volatile materials such as water, she added.

"We suspect that there may be examples of that on Mars," Boston said. "The ability to tap into frozen volatiles would be fabulous. And maybe bug bodies — maybe frozen little bodies. You never know."

The frigid, dry and radiation-bombed Martian surface is unlikely to host life as we know it today, many researchers say. But organisms might be able to survive in a Red Planet lava tube or other underground habitat, where conditions could be far more benign.

Exploring the surface of another world with a rover is a challenging enough proposition, and investigating the subsurface would be even more difficult. [The Boldest Mars Missions in History]

For starters, any potential cave-exploration mission would need to make a pinpoint landing quite close to the cavern mouth, Boston said. NASA has improved its Martian touchdown precision greatly over the years — landing-zone ellipses have shrunk from 62 by 174 miles (100 by 280 kilometers) for the 1976 Viking mission to just 4 by 12 miles (6 by 19 km) for the Curiosity rover, which landed this past August — but further strides would likely be necessary.

The actual cavern exploration would require technological advances as well. Cave rovers would have to be far more autonomous than their surface brethren, for example, since overlying rock would decrease the ability to communicate with Earth, said roboticist Red Whittaker, of Carnegie Mellon University in Pittsburgh.

Cave robots would need to be nimble navigators, constructing maps of their dark surroundings and then picking their way through the boulder-strewn tunnels.

Just getting into a Martian lava tube — and getting out again, in the case of a sample-return mission — also presents a daunting challenge. Some can be accessed via "skylights," holes in the ground where the tube's roof has collapsed.

A rover might be able to rappel down the side of such holes, Whittaker said Nov. 14 at the 2012 NASA Innovative Advanced Concepts meeting in Virginia. But this maneuver could knock rocks loose, potentially endangering the robot and the mission. So another option is to string a line across the hole's mouth and have the tightrope-walking robot descend to the floor on a tether like a spider.

"I like simple, so that's a good choice," Whittaker said.

Alternatively, the spelunking robot could leap into the cave, behaving like a "self-contained cannon," he added. Whittaker is considering such options as he develops a NIAC-funded prototype mission concept called "Spelunker," which would explore a lunar skylight and cave.

Scientists and engineers aren't ready to send cave-exploring robots to Mars yet, but such a misson is eminently possible, Whittaker said.

"What we're discussing here is just the grand leap," Whittaker said. "It's not just new in terms of destination and agenda, but the technologies that are required to do these missions are both very new to space and also within reach."

Boston voiced optimism that a spelunking Mars robot could be ready to launch by the early 2030s or so. Development of the necessary technologies should be helped along by the fact that they have important applications here on Earth, she said, citing autonomous search-and-rescue robots as one example.

"I think we're really working up to it," Boston said. "I think we're coming into an era where a lot of things that we've found very, very difficult in the past are going to become increasingly easy. And so I'm certainly hoping [a mission could occur] within the next 20 years, where I can hope to still be alive to see it," she added with a laugh.

An unmanned mission to explore the Martian underground could also aid efforts to send astronauts to the Red Planet, Boston said.

Lava tubes are probably the most promising spots to establish human settlements on Mars, she said. But scientists would need to send robotic scouts to such sites first, to make sure they're safe for habitation and to check them out for indigenous life-forms (which could theoretically harm, or be harmed by, astronauts in their midst).

Launching a lunar-cave mission — something along the lines of Whittaker's Spelunker concept, perhaps — would be a good way to get the ball rolling toward a similar effort on Mars, Boston said. And the success of near-surface Mars sample-return could set the table for a sister mission to a Red Planet cave.

"I think that once we get over this technological and psychological barrier of finally bringing something back from Mars that we can study, that the next step is going to be easier, because we'll already have looked over that cliff, and jumped over and gotten to the other side," Boston said. "It will embolden us, I hope, at the same time that the technology is advancing."

Follow SPACE.com senior writer Mike Wall on Twitter @michaeldwall or SPACE.com@Spacedotcom.
Copyright 2012 SPACE.com, a TechMediaNetwork company. All rights reserved. This material may not be published, broadcast, rewritten or redistributed.
Posted by arclein at 12:00 AM