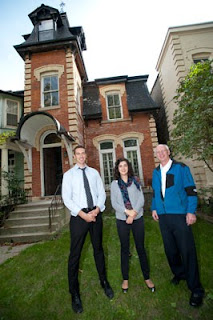 I am not sure just what they are thinking here but then what of it. What we really need is internal thin wall insulation along with base board heating or its equivalent. I would also think out heat exchangers able to vacate an empty room and drop the temperature to five degrees.

Other wise the precocious human monkey will fill up every space available to it with its acquisitions. Which of course why this line of research is a waste.

No one wishes to step out into the barn.


Ryerson professor Russell Richman (left) with his research partners Ekaterina Tzekova and Kim Pressnail, in front of the Toronto home that will be retrofitted with their nested thermal envelope design this winter.

As temperatures fall this winter, heating costs will inevitably rise. In response, Canadians will pull out their slippers, light the hearth and vigilantly monitor their thermostats, but what more can be done? According to collaborative research led by Ryerson University, a simple change in the way we live in our homes, and the introduction of a heat pump, could save up to 80% on energy consumption.

Russell Richman, a professor in the Department of Architectural Science at Ryerson University, is the co-principal investigator of an on-going research project that explores the practicality of Nested Thermal Envelope Design, a home construction design that employs zonal heating.  Space heating is the largest single contributor to residential energy use in Canada at 60% of the total. Minimizing envelope heat losses is one approach to reducing this percentage. Thanks to a construction research grant including $200,000 and $100,000 cash contributions from the Ontario Power Authority's Technology and Development Fund and the University of Toronto, the nested thermal envelope design will soon be implemented in a home in downtown Toronto.

“In the winter, you could get savings by living in a smaller space, period,” says Richman. “But you can’t just heat one room, because there is no insulation between one room and the outside or other rooms. To do it really well, you need to insulate the room and then insulate the whole house. As we explain it, zonal heating is just a house within a house, or a box within a box.”

To take full advantage of the design, the home’s core must be set at a reasonable temperature, for example 21 degrees, while the perimeter stays at 5 degrees. It is important to note that living in the core of the home is only necessary during the colder months, when the desire to save money on heating costs is at its height and when the disparity between indoor and outdoor temperatures is greatest.

This nested thermal envelope design was originally conceived by Richman and his colleague, University of Toronto professor Kim Pressnail, following a discussion between the pair on the heat loss they were experiencing in their own homes. After considering the practicality of simply living in fewer rooms, the researchers experimented with the practice of living in a smaller space while also recycling heat from within their homes. Along with Ph.D. candidate Ekaterina Tzekova, also from the University of Toronto, the team has been evaluating variations on nested thermal envelope designs since 2007.

After drafting the original design, the research team tested it using a building energy simulation program, called EnergyPlus.  Calculations revealed up to 80% in energy savings.

This winter, the researchers are moving into the next stage of the project. The nested thermal envelope design will be implemented into a home in downtown Toronto.  The team will elect test subjects to live in the home, beginning with a student and, later on, the home will become a residence for visiting professors. The research team will track behaviour patterns and get feedback from the occupants themselves.

“The question is, is it worth the additional effort of installing a heat pump? The pump needs to be servicing a lot of energy in order to validate this design,” says Richman.  “There are so many research questions to be answered with the house. It’s always exciting to take theoretical research and turn it into practice.”

Richman and his colleagues hope to collect data from the home and its inhabitants over the next five years, after which time they will continue their research with a custom built home.

The group’s preliminary findings were published in the November 2012 issue ofEnergy and Buildings.

Ryerson University is Canada's leader in innovative, career-oriented education and a university clearly on the move. With a mission to serve societal need, and a long-standing commitment to engaging its community, Ryerson offers more than 100 undergraduate and graduate programs. Distinctly urban, culturally diverse and inclusive, the university is home to more than 28,000 students, including 2,300 master's and PhD students, nearly 2,700 faculty and staff, and 140,000 alumni worldwide. Research at Ryerson is on a trajectory of success and growth: externally funded research has doubled in the past five years. The G. Raymond Chang School of Continuing Education is Canada's leading provider of university-based adult education. For more information, visitwww.ryerson.ca.

This is nothing new. Friends of mine built such a home 40 years ago. It was large, post and beam framed (he was a timber broker), and passive solar. I believe that type of construction was called "envelope homes" back then. The system worked reasonably well through the hot summers and cold windy winters here in Pennsylvania. They retired and moved to Florida.