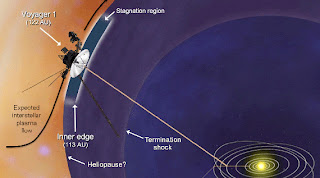 It has been predicted that magnetic field lines outside the primary influence of the sun would be in the form of channels connecting to other stars with little or no evidence to speculate with. It makes for neat graphics but little else. Now we are getting the real thing and I am sure that Mother Nature has a warehouse full of surprises waiting for us.

The serious news here is that we are getting new information and that it is best to simply absorb it. After all, this is a first exploratory bore hole in a strange country.

The persistence of magnetic fields is good news in terms of future exploration with MFEVs when they come on line in thirty or so years. MFEVs are magnetic field exclusion vessels which I described in an article I published several years ago when the science made them feasible.

This is beginning to get interesting again.


December 04, 2012 - SPACE - NASA announced Monday that after 35 years of exploration, its Voyager 1 spacecraft has entered a new, unanticipated region of space near the edge of the solar system--a "magnetic highway" where charged particles take the "exit ramp" to interstellar space.

The region connects the sun's magnetic field lines to interstellar magnetic field lines, allowing "lower-energy charged particles that originate from inside our heliosphere... to zoom out, and higher-energy particles from outside to stream in," according to a written statement issued by NASA partner Johns Hopkins Applied Physics Lab. The heliosphere is the "immense magnetic bubble containing our solar system, solar wind, and the entire solar magnetic field," according to NASA.


Scientists say they believe this is the final region Voyager 1 has to cross before reaching interstellar space.

It shows an East-West magnetic field orientation, indicative of the sun's influence. The magnetic field in interstellar space, influenced by winds from explosions of supernovae, is thought to have a roughly North-South orientation, according to NASA astrophysicist Leonard Burlaga.

Voyager 1 may remain within the heliopause for another two to three years, but it's hard to anticipate how long it will be until the probe leaves the solar system, NASA scientists said. The heliopause is where the interstellar medium and solar wind pressures balance, the outer boundary of the solar system. Launched in 1977 to explore the outer solar system, Voyager 1 and and its twin, Voyager 2, are the longest-serving spacecraft. Voyager 1 is currently 122 AU from Earth, and Voyager 2 is about 100 AU away. One AU, or astronomical unit, is equivalent to the distance from Earth to the sun. - Huffington Post. 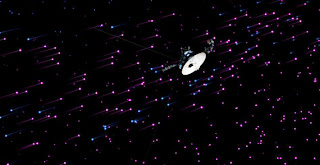 
Dec. 4, 2012:  Eleven billion miles from Earth, NASA's Voyager 1 spacecraft has entered a "magnetic highway" that connects our solar system to interstellar space. This could be one of Voyager 1's last steps on its long journey to the stars.

"Although Voyager 1 still is inside the sun's environment, we now can taste what it's like on the outside because the particles are zipping in and out on this magnetic highway," said Edward Stone, Voyager project scientist based at the California Institute of Technology, Pasadena. "We believe this is the last leg of our journey to interstellar space. Our best guess is it's likely just a few months to a couple years away. The new region isn't what we expected, but we've come to expect the unexpected from Voyager."

The new results were described on Dec. 3rd at the American Geophysical Union meeting in San Francisco.

The "magnetic highway" is a place in the far reaches of the solar system where the sun's magnetic field connects to the magnetic field of interstellar space.  This connection allows charged particles from inside the heliosphere (the magnetic bubble that surrounds the sun) to zoom out; and it allows charged particles from outside to stream in. When Voyager 1 is in the magnetic highway, onboard particle sensors can directly sample material from beyond our solar system.

Since December 2004, when Voyager 1 crossed a point in space called the termination shock, the spacecraft has been exploring the heliosphere's outer layer or "heliosheath."  In recent years, the speed of the solar wind around Voyager 1 has slowed to zero, and the intensity of the magnetic field has increased.

"We are in a magnetic region unlike any we've been in before -- about 10 times more intense than before the termination shock -- but the magnetic field data show no indication we're in interstellar space," said Leonard Burlaga, a Voyager magnetometer team member based at NASA's Goddard Space Flight Center in Greenbelt, Md.

Voyager 1's exit from the solar system is, apparently, yet to come.  But the magnetic highway is giving it a taste of what lies ahead.

Stay tuned to Science@NASA for updates from the edge of the solar system.