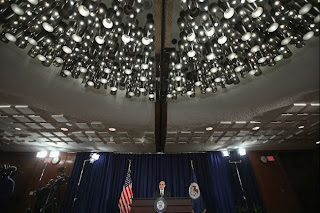 Yes, the world of central banking is sorting itself out and acting firmly on lessons learned. This can only lead to a far more activist and even successful banking regime and also an early end to the too big to fail nonsense as a license to leverage up the financial Ponzi scheme. With central banks watching each other, it will be difficult to go astray and we can expect to see a body of best practice to emerge.

Recall that up to now, best practice has been a combination of the 1933 regulatory regime for financial institutions along with Reagan shifting the tax take to the left side of the Laffer curve. This provided a natural non inflationary economic growth of around 4% for two and one half decades. It could have been improved upon with targeted lending guarantees and further regulatory reforms but was plenty good enough.

At the present, those that could do not have the knowledge to do better. This is unfortunate but the globe is no longer utterly dependent on American wisdom. Thus optimism remains the order of the day.

Central bankers rarely do radical, or even surprising, things. This week it happened twice. Hold on to your pinstripes.

BOSTON — Central bankers aren't exactly the most exciting people.
http://www.globalpost.com/dispatch/news/business/121213/global-economy-central-bankers-federal-reserve-ECB
Sure, they're smart.
Yes, they understand the complex interplay of economics, finance, politics, markets and all the other factors that make the global economy fly or fizzle.
But they're often, well, predictable.
And when it comes to explaining the mysterious workings of the global economy they're often, to be polite, incomprehensibly dull.
Still don't believe me?
Check out this bit of poetry taken directly from the minutes of the Oct. 23 Federal Reserve's Open Market Committee meeting (and if it doesn't make perfect sense, no need to decipher it):

"The Manager of the System Open Market Account (SOMA) reported on developments in domestic and foreign financial markets during the period since the FOMC met on September 12-13, 2012. The Manager also reported on System open market operations over the intermeeting period, focusing on the ongoing reinvestment into agency-guaranteed mortgage-backed securities (MBS) of principal payments received on SOMA holdings of agency debt and agency-guaranteed MBS and the purchases of MBS authorized at the September FOMC meeting. By unanimous vote, the Committee ratified the Desk's domestic transactions over the intermeeting period. There were no intervention operations in foreign currencies for the System's account over the intermeeting period."

The jargon is no different in Brussels, London, Tokyo, Beijing or other places around the world where pinstriped policymakers congregate and pontificate.
But sometimes even central bankers can be perfectly clear.
They can also, apparently, be surprising.
It happened this week in both the world's largest economy (the US) and the world's largest economic bloc (the European Union), so it's best you pay attention.
The implications of these remarkable central bank moves could have very real implications for you, me and everyone else on planet earth.
Let's start with the US Federal Reserve, which did something that it's never done before: It tied its actions to actual, concrete numbers in the economy.
The Fed said it would keep stimulating the weak US economy until the nation's unemployment rate fell to 6.5 percent (it's now at 7.7 percent). It will also keep interest rates historically low as long as inflation in the US remains under 2.5 percent.
That may not sound radical, but it is.
That's because it's the first time the US central bank has used such explicit targets.
Why the switch?
The Fed hopes it will be a more transparent way to let markets know its plans. "We think it's a better form of communication," Federal Reserve Chairman Ben Bernanke said.
But more importantly, the use of explicit "guideposts" signals that the Fed is far more concerned about the weak employment situation in America than it is with its primary worry of keeping inflation under control.
The move is part of an evolution in central bank thinking that's been pushed, in particular, by the president of the Federal Reserve Bank of Chicago, Charles Evans.
Here's how Evans described his thinking, way back in 2011:

“Imagine that inflation was running at 5 percent against our inflation objective of 2 percent. Is there a doubt that any central banker worth their salt would be reacting strongly to fight this high inflation rate? No, there isn’t any doubt. They would be acting as if their hair was on fire. We should be similarly energized about improving conditions in the labor market.”

So it's burn, baby, burn until the job market improves.
That means we should expect the Fed's loose monetary policy to continue at least into 2015 when — fingers crossed — the US jobless rate is forecast to hit that 6.5 percent target.
Meanwhile in Europe, the whiff of radicalism this week mixed with the stale, corpse-like odor of economic decline triggered by the ongoing euro crisis.
European finance ministers agreed — for the first time — to place between 100 and 200 banks across Europe under the supervision of the European Central Bank.
The measure, which still needs approval by the European Parliament, is a giant step towards the tighter economic integration necessary to bring the euro crisis under control.
Moreover, the Europeans only began talking about a move back in June. Getting anything done in Europe in six months is a major accomplishment.
Here's how The New York Times speculated on what the development could eventually mean:

"Such measures could include a unified system, and perhaps shared euro area resources, to ensure failing banks are closed in an orderly fashion. This could be followed, in time, by measures intended to reinforce economic and monetary union, including, possibly, the creation of a shared fund that could be used to shore up the economies of vulnerable members of the euro zone."

European Central Bank chief Mario Draghi called the unified banking supervision an "important step."
Even grumpy German Chancellor Angela Merkel seemed happy with the decision, calling it “a big step toward more trust and confidence in the euro zone.”
So there you go, world: central bankers gone wild.
Let's see where this party goes from here.