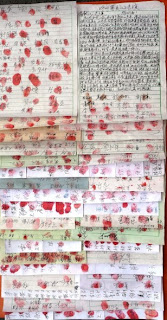 It is not so much that the Falun Gong is doing anything new at all but it is organizing around the natural communal impulse to provide service. By oneself, you are a rat, but as part of the community you are an organizing force for the greater whole. Just by doing the community is shamed into imitation.

Accepting this and building around it is good governance.

The Falun Gong is an inevitable response to deliberate bad governance that flew in the face of human instincts. Betrayal lasts a moment and isolates the individual. A good deed secures trust and support forever.

Unsurprisingly a grassroots good governance movement is profoundly stabilizing. We may call it Falun Gong, but that is irrelevant. It is a natural movement that a self empowered people will implement globally in confrontation of any larger authority.

How Falun Gong Is Bringing Stability to China

A photo of a petition of 2,000 signatures submitted in November 2012 on behalf of Falun Gong practitioner He Jincui, of Chenzhou City in southern China's Hunan Province. “Did the Communist Party seize another Falun Gong (practitioner)?” asked one woman while signing. “Please hurry up and find more people to sign for her rescue.”

The rats acted like they owned the place. So thought Ms. Yi Lian when she moved her family in 2003 into a 196 square foot apartment in a tenement in a city in northeastern China’s Heilongjiang Province.

In an article recounting her 10-year experience in this building published on the Falun Gong website Minghui, she explained that this modest apartment at least allowed the family the security of having their own place to live. Their home had been demolished the year before by developers.

The apartment stairwell was filthy, though. The janitor only rarely swept it. Bags of garbage were piled outside doors, messy spills fell out of the bags and were tracked through the hallway; mucus, spit, and cigarette butts added to the mess, and rats wandered around at their leisure looking for food.

The grime and the rodents were not the worst of it. The 18 families living in the seven-floor building did not speak to one another. When individuals passed by on the stairs they would not make way. Glances were indifferent or hostile. Everyone was suspicious of everyone else, and one often heard shouting and cursing break out over petty matters.

There were reasons for the state of the little society of this stairwell. Over 60 years of communist rule has taught the people of China to withdraw, be wary, protect oneself, and to take advantage when one can.

Because Ms. Yi practiced Falun Gong, she saw things differently. She tries to live her life according to three principles: being truthful, compassionate, and tolerant. She knew what she should do in this situation and all situations: She should think of others first.

She grabbed her broom and mop and went to work. Each day she would take all of the garbage bags out to the dumpster. She would sweep the stairway from top to bottom and then mop it, picking up cigarette butts by hand, getting down on her knees to wipe up particularly messy spills or scrape gum off the steps.

Once a resident seeing her cleaning up a filthy mess spit on her and said “shameless,” thinking someone from her family had left it there. Ms. Yi was stung, but persevered nonetheless.

And then, things began to change. Neighbors, seeing what she was doing, stopped leaving garbage bags in the stairwell. The steps needed less cleaning. The rats went elsewhere.

As the atmosphere brightened, the neighbors started to open up. They began to trust one another, especially Ms. Yi, and to live in harmony. Laughter sounded in the stairway, where before only curses could be heard.

Her neighbors asked her why she had been so kind, and she told them about Falun Gong. When she asked them to withdraw from the Chinese Communist Party, they did so. And her neighbors, who all worked in different types of jobs, took it upon themselves in their daily lives to try to protect Falun Gong practitioners, who were always in danger of arrest.

Her neighbors’ response to Ms. Yi is not unusual. The Minghui website has documented how throughout China ordinary people have begun standing up to protect the practitioners in their midst.

Wang Xiaodong is a highly respected teacher in Zhouguantun Village, in Hebei Province in northern China. In February 2012, 40 policemen ransacked his house, stole 20,000 yuan (US$3,210) in cash and took him away, leaving his 6-year-old child and 77-year-old mother to fend for themselves.

Outraged, all 300 families in his village signed a petition in April demanding his release. Alongside their real names, they affixed their thumbprints in red wax, a traditional way of indicating the solemnity of a document. In September, they submitted a second petition, this time with 587 signatures.

In June 2012, police came for Li Zhen, a Falun Gong practitioner living in Tangshan City in Hebei Province. When his wife cried for help, 200 people came running and made a human wall between the police and Li.

His neighbors told the police about the time in the summer of 2010 that someone fell into the Qianquzhuang River. Although there were many bystanders, only Li jumped in to save the victim.

They told the police, “If everyone was as good as he, there would be no need for the police. But you are arresting him. You shouldn’t do that.”

An old lady stood by the police car and wept, while one man grabbed a shovel, intending to have a go at the officers, until his neighbors cooled him down.

After a two-hour standoff, the police eventually arrested Li. On the spot, 70 people signed their names and affixed their thumbprints to a petition.

In one case in May 2012, in Heilongjiang Province, 15,000 people signed a petition supporting a young woman whose practitioner mother and sister were imprisoned and whose father had been tortured to death.

These individuals who have acted to rescue practitioners have risked their lives—and they knew they were doing so.

In the case of Wang Xiaodong, police have tracked down those who signed the petitions and demanded they recant any support for Falun Gong. The village has seen more arrests.

Signing petitions on behalf of Falun Gong practitioners has brought reprisals. During one police raid, a woman died when she fell from her fifth-floor apartment.

A neighbor who signed the petition for Li Zhen explained his doing so this way: “Mr. Li is a really good person. He helps whenever and whoever needs help. He is in trouble. We shouldn’t just think about ourselves. We think that he is a good person.”

Those who are supporting Falun Gong practitioners are choosing to put what they believe is right above their own safety. Instead of being ruled by fear of the Party, they are choosing to be ruled by their conscience.

Over the past two decades or so, there has been a lot of talk in China about the need for social stability. In fact, stability is the bugaboo that has been used to scare the Chinese people into believing the Party is indispensable.

And not just the Chinese people. One can’t attend a forum about China at a Washington, D.C., think-tank without hearing someone talk learnedly about the need for stability.

But has anyone noticed that this theory of stability puts the cart before the horse? The Chinese Communist Party spends more on its stability maintenance budget than it does on defense—and the number of mass protests continues to skyrocket.

By putting stability first, the CCP has tried to replace the individual’s capacity for self-rule—for acting on the basis of conscience—with fear, and the Chinese people have grown more ungovernable with each passing year.

The Tsinghua University sociologist Sun Liping has noticed the failure of the policy of stability. He has written, “Because we have taken a variety of measures to ‘maintain stability,’ we could not advance the necessary reforms to build a healthy society; as a result social decay has intensified.”

Ms. Yi has experienced social decay and social renewal, and she and other Falun Gong practitioners know the secret to restoring their troubled nation to health.

Kindness wins hearts, and a life lived according to virtue helps others rediscover their own humanity. That prescription, and a good broom, keeps the rats away.

Why don't the Chinese peoples exterminate communists and solve their problem for good?