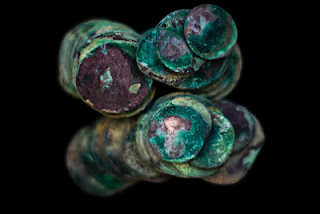 This story continues to show us the real need for an international treaty that allows treasure hunting to be made viable. The outcome here is a tragedy for the investors and worse for Spain since every further recovery is simply going to be grabbed and tossed directly into a smelter.

A correct solution is to outright recognize discoverer's right and then apply a transfer price for recovered material. I may need arbitration to settle it but that is common anyway. The point is that any transfer price must recognize fair market value and legitimate costs including a reasonable allowance for archeological oversight not to be abused either.

The right to pay can even be transferred on as institutions around the world can then directly participate.

It is easy to establish a melt price for a gold coin that is easily honored. It is also quite worthless if it cannot be transferred in its present condition.

As I learned a long time ago in the mining exploration business, only the owner will show up on a property choked with thorny vegetation in a howling wind storm raining horizontally to help you channel sample a hungry looking rock face. If governments and archeologist can ever learn to trust the people we will be buried in fresh data, artifacts and detailed information matching the best work of indifferent students any day.


A worker of the ministry holds up for photographers a silver coin from the shipwreck of a 1804 galleon, on its first display to the media at a ministry building, in Madrid, Friday, Nov. 30, 2012 [Credit: AP/Daniel Ochoa de Olza] 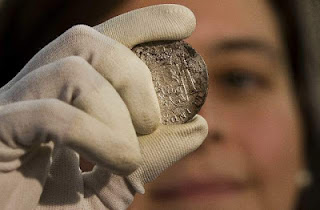 A block of encrusted silver coins from the shipwreck of a 1804 galleon, on its first display to the media at a ministry building, in Madrid, Friday, Nov. 30, 2012. Spanish cultural officials have allowed the first peep at 16 tons (14.5 metric tons) of the shipwreck, 'Nuestra Senora de las Mercedes' a treasure worth an estimated $500 million that a U.S. salvage company gave up after a five-year international ownership dispute [Credit: AP/Daniel Ochoa de Olza]

Spanish cultural officials allowed a first peek Friday at some of the 16 tons of shipwreck treasure worth an estimated $500 million that a U.S. salvage company gave up this year after a five-year ownership dispute.

Only a tiny portion of the haul from the Nuestra Senora de las Mercedes, a galleon that ank off Portugal's Atlantic coast near the straits of Gibraltar in 1804, was shown to the media: 12 individual silver coins, a block of encrusted silver coins stuck together after centuries underwater, two gold tobacco boxes and a bronze pulley.


Authorities who have been inventorying the treasure since it was flown from Florida to Spain in February said it will be transferred later this year from Madrid to the National Museum of Underwater Archaeology in the Mediterranean city of Cartagena. Displays are expected to start next year, with some items put on rotating temporary displays at museums across the country.


Though previous estimates have put the value of the treasure at $500 million, Spanish officials said they weren't trying to determine an amount because the haul is part of the nation's cultural heritage and can never be sold under Spanish law.


"It's invaluable," said Elisa de Cabo, the Culture Ministry's deputy director of national heritage. "How would you put a price on the Mona Lisa?"

Spain took possession of the treasure after courts rejected arguments that Florida-based Odyssey Marine Exploration was entitled to all or most of the treasure. De Cabo said Spanish authorities are still trying to convince a judge in Tampa that the American company should also be forced to pay Spain's legal costs.


Officials said Friday that the weight of the treasure was not the 17 tons reported during the legal fight because that included a ton of sea water used to help preserve many of the silver coins in storage containers.


Odyssey had argued that the wreck was never positively identified as the Mercedes. And if it was that vessel, the company contended, then the ship was on a commercial trade trip — not a sovereign mission — at the time it sank, meaning Spain would have no firm claim to the cargo. International treaties generally hold that warships sunk in battle are protected from treasure seekers.


Odyssey lost every round in federal courts as the Spanish government painted the company as modern-day pirates. The company has said in earnings statements that it has spent $2.6 million salvaging, transporting, storing and conserving the treasure.


The metals were mined and the coins minted in the Andes, from places that are now in Bolivia, Chile and Peru.


Spain overcame a last-minute effort by the Peruvian government to block the transfer of the treasure back to Spain. Peru did not gain its independence until 1824, but the country's lawyers argued it was more than a simple colony at the time because it was the local seat of the Spanish crown when the ship sank.


Spain's Queen Sofia promised in a visit to Bolivia several months ago that some of the treasure would be lent to the country for display in museums.