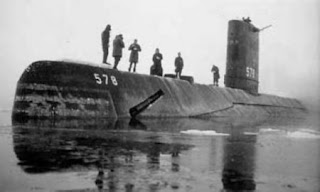 The one aspect of present climate punditry that has been a skeleton in the closet has been a decided inattention to the Arctic's historical record as we have it before the advent of sat elites. This item is a small step to remedy all that.

The point is that warming in the Arctic appears to come in sustained surges that last several years before reversion to the natural average.

The important question that remains unanswered is whether any of it represents compelling trend lines outside the expected recovery from the little ice age and even that may be just an excessive pulse that took decades to recover from.

We have identified the Antarctic maximum as a plausible pulse producing source of cold water into the Atlantic basin which would naturally accelerate the removal of warmer surface waters.


Die kalte Sonne website has another report about the Arctic. It presents a chronology showing that really nothing unusual is happening today. You’ll find it below translated in English.

US submarine “Skate” at the North Pole in August, 1958. ”Hey, where’s the ice!”  US Navy photo. Source: Wikipedia.org/history.

When one hears or reads the reports about the Arctic sea ice, it helps to remember that satellite measurement did not begin until 1979. Thus we have data only for a period of just over 30 years. This barely suffices to fulfil the gladly used “climate definition” of a minimum period of 30 years. So we can’t avoid having a suspicious feeling, as we ask what did the sea ice do before satellite measurement began? Can we just simply skip over this and simply add the notation that we just don’t know much about it? Of course not. That would be too easy. Before the days of satellite measurement, ships travelled in the Arctic and brought back information about sea ice cover in the region.

In the following chronology, we present some of these reports. You’ll be amazed by what was observed.
1907 The New York Times reported on an Arctic heat wave. Source: Real Science.

1922 The Pittsburgh Press: “Extraordinary warmth in the Arctic during the last few years. Polar ice sheet to melt down? “Source: Real Science, The Mail.

1923 Fishermen, seal hunters and explorers report on unusually high temperatures around Spitzbergen and the East Arctic Ocean. The Daily News from Perth speculated on whether the sea ice in the Arctic Ocean would soon melt away as a result of a “radical climate change”. Source: Real Science.

Arctic temperatures in the 1930s were warmer and the warming rate was higher than the rate seen at the end of the 20th century. Source: The Hockeyschtick.

At the end of the 1930s, Soviet scientists noticed that for an extended time period it even had been 6°C warmer than during the Nansens ice drift, and a few degrees warmer than today.Source: Donner + Doria.

1940 According to reports, Arctic sea ice in February 1940 was a mere 2 meters thick, which was the same as the thickness of February 2012. Source: Real Science,

1947 Geophysicist Hans Ahlmann sets off the alarm: Climate change in the Arctic is so dramatic that an international agency needs to be set up to address it. Source:Real Science, the reference frame.

1958 During a voyage in the summer of 1958, American submarine ”Skate“ emerged in open water nine times – and once at the North Pole. Source: Donner + Doria.