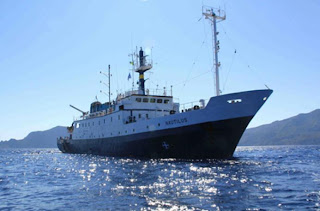 This is good. It gives us a time line for the end of the Ice Age melt itself. What this does infer is that the Ice melted from around 12900 BP to 7000 BP or over a span of 6000 years. This also means that all shore lines stabilized around 5000 BC and any earlier coastal settlement was inundated sooner or later.

The break though into the Black Sea was a last phase of the melt. This appears to have been a catastrophic event although the appropriate waterfall needs to be located if it has not.

The rest of the sea rise was generally rather slow. This allowed the coasts to be eroded out of existence to leave no trace. However we know of at least one to two surges which may well have been strong enough to flood large areas without destroying them. There are also comparable subsidence events that are more fruitful. Port royal is a good example.

We already knew that this was true. What we now have is the actual coastline still intact in the Black Sea and plausibly we will locate the remains of actual towns and ports here also, all of which can be assigned safely to 7000 years ago.

It is always satisfying to have conjectures fleshed out with a mountain of evidence.

Washington, December 11 (ANI): An acclaimed underwater archaeologist believes that he has found evidence that the Great Biblical Flood of Noah's time may have actually happened after all.

Robert Ballard, one of the world's best-known underwater archaeologists, told ABC News that his team is probing the depths of the Black Sea off the coast of Turkey in search of traces of an ancient civilization hidden underwater since the time of Noah.

Ballard said some 12,000 years ago, much of the world was covered in ice.

"Where I live in Connecticut was ice a mile above my house, all the way back to the North Pole, about 15 million kilometers, that's a big ice cube. But then it started to melt. We're talking about the floods of our living history," he explained it to ABC News.

The water from the melting glaciers began to rush toward the world's oceans, Ballard said, causing floods all around the world.

"The questions is, was there a mother of all floods," Ballard said.

According to a controversial theory proposed by two Columbia University scientists, there really was one in the Black Sea region.

They believe that the now-salty Black Sea was once an isolated freshwater lake surrounded by farmland, until it was flooded by an enormous wall of water from the rising Mediterranean Sea. The force of the water was two hundred times that of Niagara Falls, sweeping away everything in its path.

Fascinated by the idea, Ballard and his team decided to investigate.

"We went in there to look for the flood. Not just a slow moving, advancing rise of sea level, but a really big flood that then stayed... The land that went under stayed under," he said.

Four hundred feet below the surface, they unearthed an ancient shoreline, proof to Ballard that a catastrophic event did happen in the Black Sea.

By carbon dating shells found along the shoreline, Ballard said he believes they have established a timeline for that catastrophic event, which he estimates happened around 5,000 BC. Some experts believe this was around the time when Noah's flood could have occurred.

"It probably was a bad day. At some magic moment, it broke through and flooded this place violently, and a lot of real estate, 150,000 square kilometers of land, went under," Ballard said.

Ballard does not think he will ever find Noah's Ark, but he does think he may find evidence of a people whose entire world was washed away about 7,000 years ago.

He and his team said they plan to return to Turkey next summer. (ANI)