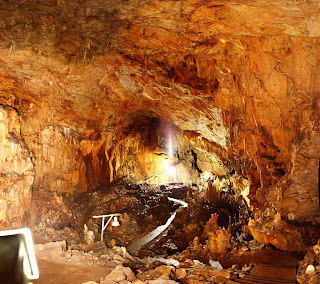 This is quite a story. It already had a long prehistory when it was sealed off at the beginning of the Bronze Age. This meant that its importance was not then lost. That it became an archetype for Hades is completely convincing here.

The access tunnel may have remained open allowing some later use, although the death of those entrapped suggest otherwise or at least not until much later if at all. As stated, we are likely to uncover artifacts going back deep in time as adjacent caves have Neanderthal artifacts. This also suggest that this region has remained above sea level throughout.

Certainly the inspiration for the reality of Hades was not just some nondescript cave and seriously large caves accessible to the open air are seriously few and far between. This one certainly does the trick. I would be more convinced if the site had become a pilgrimage site that found its way into the literature that has come down to us. That alone checks my enthusiasm as it is difficult to think the information was actually lost ever.

It is noteworthy that Pilgrims were coming even then which establishes the outright antiquity of seagoing. You can be certain that few actually walked there.

Since the artifacts are well preserved, the recovery of organic materials will be plausible also. In any event this provides an excellent snapshot of life five thousand years ago which we certainly need. Way too many sites get dismissed from wrong expectations. This type of site tells us if something is not there, it still could have been and may have been lost to looting and natural destruction.


Killer Cave May Have Inspired Myth of Hades

A giant cave called Alepotrypa that might have helped serve as the inspiration for the mythic ancient Greek underworld Hades may have supported complex settlements in its heyday. Here, the cave's main chamber.


A giant cave that might have helped serve as the inspiration for the mythic ancient Greek underworld Hades once housed hundreds of people, potentially making it one of the oldest and most important prehistoric villages in Europe before it collapsed and killed everyone inside, researchers say.

The complex settlement seen in this cave suggests, along with other sites from about the same time, that early prehistoric Europe may have been more complex than previously thought.

The cave, located in southern Greece and discovered in 1958, is called Alepotrypa, which means "foxhole."

"The legend is that in a village nearby, a guy was hunting for foxes with his dog, and the dog went into the hole and the man went after the dog and discovered the cave," said researcher Michael Galaty, an archaeologist at Millsaps College in Jackson, Miss. "The story's probably apocryphal — depending on who you ask in the village, they all claim it was their grandfather who found the cave."

After its discovery, Greek officials originally saw the cave as a potential tourist attraction. However, when archaeologists realized the historical secrets it might hold, they led efforts to keep tourism from inadvertently destroying the site.

"If you've ever seen 'The Lord of the Rings,' this might make you recall the mines of Moria — the cave is really that impressive," Galaty told LiveScience.

Excavations that have taken place at Alepotrypa since 1970 uncovered tools, pottery, obsidian and even silver and copper artifacts that date back to the Neolithic or New Stone Age, which in Greece began about 9,000 years ago.

"Alepotrypa existed right before the Bronze Age in Mycenaean Greece, so we're kind of seeing the beginnings of things that produced the age of heroes in Greece," Galaty said.

Cave dwellers apparently used the cavern not only as a shelter, but also as a cemetery and place of ritual.

"You have to imagine the place torchlit, filled with people lighting bonfires and burying the dead," Galaty said. "It was quite like a prehistoric cathedral, a pilgrimage site that attracted people from all over the region and perhaps from further afield."

The cave apparently went through a series of occupations and abandonments.

"Alepotrypa was at a perfect place to intercept sea trade from Africa all the way to the eastern Mediterranean, being right at the southern tip of Greece," Galaty said.

Settlement at the cave abruptly ended when its entrance collapsed about 5,000 years ago, perhaps due to an earthquake, burying cave dwellers alive.

"It is and was an amazing place, the closest thing we have to a Neolithic Pompeii," Galaty said, referring to the ancient Roman town of Pompeii, which was buried when Mt. Vesuvius erupted nearly 2,000 years ago. Ash entombed and preserved Pompeii, and excavations there have given archaeologists extraordinarily detailed views of life during that time. In much the same way, the final cave collapse left everything in place in Alepotrypa, with everything inside getting a pearly mineral coating over the years.

"The burial sites and rituals that took place really do give the cave an underworld feel. It's like Hades, complete with its own River Styx," Galaty added, referring to the river that in Greek myth served as the boundary between the mortal realm and the netherworld.

For instance, surveys around the cave now show there was a settlement outside. Altogether, hundreds of people may have lived at the site in its heyday, making it one of the largest, most complex known Neolithic villages in Europe.

In addition, analysis by researcher Panagiotis Karkanas at the Ephoreia of Paleoanthropology and Speleology of Southern Greece in Athens and his colleagues is confirming that rituals were conducted there regularly.

Much remains unknown about the cave. For instance, "we don't know how much deeper deposits go. For all we know, we might have Neanderthals down there," Galaty said. "The next bay over, you have Neanderthal artifacts in caves, so it's hard to believe there wouldn't be such evidence in Alepotrypa. We just haven't dug deep enough to know."

Chemical analysis of the pottery can also shed light on its origins.

"Giorgos Papathanassopoulos has always argued this pottery was not local to the site, but came from elsewhere — that the cave was a kind of pilgrimage site where important people were buried, leading to the fanciful idea that this was the original entrance to Hades, that it was the source of the Greek fascination with the underworld," Galaty said.

This site, along with others in Europe, might help confirm that complex societies arose earlier than currently thought on the continent.

Papathanassopoulos, Karkanas and Galaty, along with Anastasia Papathanasiou, William Parkinson, Daniel Pullen and their colleagues, will detail this year's findings at the annual meeting of the Archaeological Institute of America on Jan. 6 in Seattle.