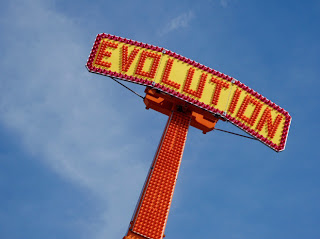 What has happened is that mankind entered the world of agricultural abundance and is adapting to this new paradigm with a blast of increased variation and choices. At present we are witnessing the onslaught of global hybridization. This will shift variations across huge populations and induce natural hybrid vigor world wide. It is all stunningly efficient and we barely understand it is happening.

Add to that our incipient capacity to outright manage desired outcomes and we might expect to begin raising special purpose humans. As I have already posted, I have conjectured that humanity did this already some forty thousand years ago and then vacated the planet in preparation for ending the Ice Age. They did it by the simple expedient of ensuring the next generation was space adapted.

After the Pleistocene Nonconformity had run its course from 13900 BP through 10,000 BP, they then engineered another strain of humanity to recolonize Terra and to terraform it.

What has been done before will certainly be emulated as needed.

If you could escape the human time scale for a moment, and regard evolution from the perspective of deep time, in which the last 10,000 years are a short chapter in a long saga, you’d say: Things are pretty wild right now.

In the most massive study of genetic variation yet, researchers estimated the age of more than one million variants, or changes to our DNA code, found across human populations. The vast majority proved to be quite young. The chronologies tell a story of evolutionary dynamics in recent human history, a period characterized by both narrow reproductive bottlenecks and sudden, enormous population growth.

The evolutionary dynamics of these features resulted in a flood of new genetic variation, accumulating so fast that natural selection hasn’t caught up yet. As a species, we are freshly bursting with the raw material of evolution.

“Most of the mutations that we found arose in the last 200 generations or so. There hasn’t been much time for random change or deterministic change through natural selection,” said geneticist Joshua Akey of the University of Washington, co-author of the Nov. 28 Nature study. “We have a repository of all this new variation for humanity to use as a substrate. In a way, we’re more evolvable now than at any time in our history.”

Akey specializes in what’s known as rare variation, or changes in DNA that are found in perhaps one in 100 people, or even fewer. For practical reasons, rare variants have only been studied in earnest for the last several years. Before then, it was simply too expensive. Genomics focused mostly on what are known as common variants.

However, as dramatically illustrated by a landmark series of papers to appear this year — by Alon Keinan and Andrew Clark, by Matt Nelson and John Novembre, and another by Akey’s group, all appearing inScience, along with new results from the humanity-spanning 1,000 Genomes Project — common variants are just a small part of the big picture. They’re vastly outnumbered by rare variants, and tend to have weaker effects.

The medical implications of this realization are profound. The previously unappreciated significance of rare variation could explain much of why scientists have struggled to identify more than a small fraction of the genetic components of common, complex disease, limiting the predictive value of genomics.

But these findings can also been seen from another angle. They teach us about human evolution, in particular the course it’s taken since modern Homo sapiens migrated out of Africa, learned to farm, and became the planet’s dominant life form.

“We’ve gone from several hundred million people to seven billion in a blink of evolutionary time,” said Akey. “That’s had a profound effect on structuring the variation present in our species.”

Akey isn’t the first scientist to use modern genetic data as a window into recent and ongoing human evolution, nor the first to root rare variation in humanity’s post-Ice Age population boom. The new study’s insights reside in its depth and detail.

The researchers sequenced in exhaustive detail protein-coding genes from 6,515 people, compiling a list of every DNA variation they found — 1,146,401 in all, of which 73 percent were rare. To these they applied a type of statistical analysis, customized for human populations but better known from studies of animal evolution, that infers ancestral relationships from existing genetic patterns.

“There were other hints of what’s going on, but nobody has studied such a massive number of coding regions from such a high number of individuals,” said geneticist Sarah Tishkoff of the University of Pennsylvania.

Akey’s group found that rare variations tended to be relatively new, with some 73 percent of all genetic variation arising in just the last 5,000 years. Of variations that seem likely to cause harm, a full 91 percent emerged in this time.

Why is this? Much of it is a function of population growth. Part of it is straightforward population growth. Just 10,000 years ago, at the end of the last Ice Age, there were roughly 5 million humans on Earth. Now there are 7 billion. With each instance of reproduction, a few random variations emerge; multiply that across humanity’s expanding numbers, and enormous amounts of variation are generated.
Also playing a role are the dynamics of bottlenecks, or periods when populations are reduced to a small number. The out-of-Africa migration represents one such bottleneck, and others have occurred during times of geographic and cultural isolation. Scientists have shown that when populations are small, natural selection actually becomes weaker, and the effects of randomness grow more powerful.

Put these dynamics together, and the Homo sapiens narrative that emerges is one in which, for non-African populations, the out-of-Africa bottleneck created a period in which natural selection’s effects diminished, followed by a global population boom and its attendant wave of new variation.

The result, calculated Akey, is that people of European descent have five times as many gene variants as they would if population growth had been slow and steady. People of African descent, whose ancestors didn’t go through that original bottleneck, have somewhat less new variation, but it’s still a large amount: three times more variation than would have accumulated under slow-growth conditions.
Natural selection never stopped acting, of course. New mutations with especially beneficial effects, such as lactose tolerance, still spread rapidly, while those with immediately harmful consequences likely vanished within a few generations of appearing. But most variation has small, subtle effects.

It’s this type of variation that’s proliferated so wildly. “Population growth is happening so fast that selection is having a hard time keeping up with the new, deleterious alleles,” said Akey.

One consequence of this is the accumulation in humanity of gene variants with potentially harmful effects. Akey’s group found that a full 86 percent of variants that look as though they might be deleterious are less than 10,000 years old, and many have only existed for the last millennium.

“Humans today carry a much larger load of deleterious variants than our species carried just prior to its massive expansion just a couple hundred generations ago,” said population geneticist Alon Keinan of Cornell University, whose own work helped link rare variation patterns to the population boom.

The inverse is also true. Present-day humanity also carries a much larger load of potentially positive variation, not to mention variation with no appreciable consequences at all. These variations, known to scientists as “cryptic,” that might actually be evolution’s hidden fuel: mutations that on their own have no significance can combine to produce unexpected, powerful effects.

Indeed, the genetic seeds of exceptional traits, such as endurance or strength or innate intelligence, may now be circulating in humanity. “The genetic potential of our population is vastly different than what it was 10,000 years ago,” Akey said.

How will humanity evolve in the next few thousand years? It’s impossible to predict but fun to speculate, said Akey. A potentially interesting wrinkle to the human story is that, while bottlenecks reduce selection pressure, evolutionary models show that large populations actually increase selection’s effects.

Given the incredible speed and scope of human population growth, this increased pressure hasn’t yet caught up to the burst of new variation, but eventually it might. It could even be anticipated, at least from theoretical models, that natural selection on humans will actually become stronger than it’s ever been.

“The size of a population determines how much selection is going to be acting moving forward,” said anthropologist Mark Shriver of Penn State University. “You have an increase in natural selection now.”

An inevitably complicating factor is that natural selection isn’t as natural as it used to be. Theoretical models don’t account for culture and technology, two forces with profound influences. Widespread use of reproductive technologies like fetal genome sequencing might ease selection pressures, or even make them more intense.

As for future studies in genetic anthropology, Akey said scientists are approaching the limits of what can be known from genes alone. “We need to take advantage of what people have learned in anthropology and ecology and linguistics, and synthesize all this into a coherent narrative of human evolution,” he said.

Geneticist Robert Moyzis of the University of California, Irvine, co-author of a 2007 study on accelerating human evolution, noted that the new study only looked at protein-coding genes, which account for only a small portion of the entire human genome. Much of humanity’s rare variation remains to be analyzed.

Moyzis’ co-authors on that study, geneticist Henry Harpending of the University of Utah and anthropologist John Hawks of the University of Wisconsin, also warned against jumping to early conclusions based on the new study’s dating. Some of what appears to be new variation might actually be old, said Hawks.