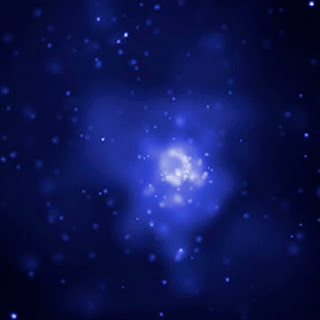 Six nearby unique galaxies makes no particular sense. Thus the conclusion here is suspect also. The actual apparent mass may also be a relativistic effect which can certainly ramp up observed mass.

So we have an interesting anomaly and the first explanation makes me uncomfortable. Once one assumes relativistic effects, we can postulate plausible scenarios that may even include several adjacent galaxies. It may represent a natural transition phase of all galaxies and we have just picked up the correct locale to observe it.

In the meantime the theorists are sent back to school to figure it out.


Astronomers have discovered what may be the most massive black hole ever known in a small galaxy about 250 million light-years from Earth, scientists say.

The supermassive black hole has a mass equivalent to 17 billion suns and is located inside the galaxy NGC 1277 in the constellation Perseus. It makes up about 14 percent of its host galaxy's mass, compared with the 0.1 percent a normal black hole would represent, scientists said.

"This is a really oddball galaxy," said study team member Karl Gebhardt of the University of Texas at Austin in a statement. "It's almost all black hole. This could be the first object in a new class of galaxy-black hole systems."

The giant black hole is about 11 times as wide as the orbit of Neptune around our sun, researchers said. The mass is so far above normal that the scientists took a year to double-check and submit their research paper for publication, according to the study's lead author, Remco van den Bosch.

"The first time I calculated it, I thought I must have done something wrong. We tried it again with the same instrument, then a different instrument," van den Bosch, an astronomer at Germany's Max Planck Institute for Astronomy, told SPACE.com. "Then I thought, 'Maybe something else is happening.'"

The finding may have implications for our understanding of how giant black holesevolve  in the center of galaxies.

Astronomers typically believe that the size of the central part of a galaxy, and the black hole inside of it, are linked. But the vastly different proportions seen in NGC 1277 are calling that into question.

NGC 1277's black hole could be many times more massive than its largest known competitor, which is estimated but not confirmed to be between 6 billion and 37 billion solar masses in size.It makes up about 59 percent of its host galaxy's central mass - the bulge of stars at the core. The object's closest competitor is in the galaxy NGC 4486B, whose black hole takes up 11 percent of that galaxy's central bulge mass.

However, van den Bosch's team says it has also spotted five other galaxies near NGC 1277 that look about the same, and may also harbor gigantic black holes inside of them.

"You always expect to find one sort [of a phenomenon], but now we have six of them," van den Bosch said. "We didn't expect them, because we do expect the black holes and the galaxies to influence each other."

The research is detailed in tomorrow's (Nov. 29) edition of the journal Nature.

Van den Bosch said his team discovered the mega black holes during a survey to seek "the biggest black holes we could find."

The astronomers analyzed the light coming from 700 galaxies, using an immense light-gathering telescope: the Hobby-Eberly Telescope at the University of Texas at Austin's Mcdonald Observatory.

From that large survey, they found six galaxies with stars and other objects whipping about inside of them at unusually high average speeds — more than 218 miles a second (350 kilometers). The galaxies also were small, at less than 9,784 light-years across.

The team also noted that NGC 1277 has only old stars inside it. The youngest stars in the galaxy are 8 billion years old, almost twice the age of our sun.

Van den Bosch said he is curious to know if these large black holes only formed in the early years of the universe.

"It could just be this thing has been sitting around since the Big Bang and not done much since then," he said. "It might be a relic of what star formation and galactic formation looked like at that time."