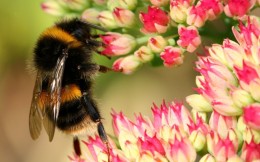 This is one more kick at this cat. The attempt to avoid the reality continues and will not end until the beekeeping industry launches a class action suit against Bayer in particular and all other found ins. They do not even try to create compelling controversy anymore. Ignoring it seems good enough.

I am sure that bee keepers are now doing their own checking before they set out hives in order to minimize the risk of exposure. That may be good enough in most cases and the farmers will be working around it all also. That could also be the reason things have quieted down.

It is hard to understand how anyone thought that a persistent pesticide background would fail to be concentrated by foraging bees except as wishful thinking.

In today’s news from the desk of Captain Obvious—scientists have found that pesticides may be contributing to the decline in bumblebees. Yes, apparently we needed another study for this. That study, led by biologists with the University of London, looked at what happened to bees in areas where different crops are sprayed with pesticides. What they found could explain why bumblebee colonies are failing.

According to Raw Story, the study was particularly important because it looked at what happened to bees following pesticide exposure for four weeks. Current industry guidelines in the testing of pesticides for safety, only require 96 hours.

The bees were divided into four groups. Three had access to feeder boxes with a sugary syrup spiked with either imidacloprid insecticide or a filter paper with gamma-cyhalothrin on it. The bees were not forced into these boxes, but the boxes were left in the path of the bees, around landscaping for pollen-foraging. The fourth group of bees was a control group, having no access to the chemicals.

All of the bees who were allowed access to the pesticides showed negative results. Those colonies who had contact with imidacloprid were less likely to return to the nest after foraging. Also, the larvae in that colony was less likely to mature to adult bumblebees, suggesting the adult bees brought home the chemicals to the immature insects.

The other group exposed to chemicals, in this case gamma-cyhalothrin, experienced a higher death rate. In both colonies exposed to pesticides, the colonies were more likely to fail.

While this study, published in Nature, was only conducted on bumblebees (the big fuzzy ones), the same results would be likely in other bee varieties—specifically honey bees, whose colonies are much larger.
“Our findings have clear implications for the conservation of insect pollinators in areas of agricultural intensification, particularly social bees, with their complex social organisation and dependence on a critical threshold of workers,” said researchers.

And of course this isn’t the only evidence linking pesticides with bee collapse. Another study confirms that the bee population decline is also linked to corn insecticides that are among the most widely used in the world. The study sheds more light on the rampant downfall of the bee population through mass die-offs, also known as colony collapse disorder, with the researchers noting that an increase in bee deaths began to be observed as soon as the insecticide was put into use.

Bees are the pollinators of the vast majority of plant life. They are said to account for 80% of pollination by insects. And with populations dropping, it’s crucial that people in power take note of studies like this and take steps to remedy the declining numbers.

But, as we reported in April, Monsanto, the company responsible for keeping GMO crops front and center, will be doing their best to bury any links between bee populations and pesticides. Last year they actually bought out a bee research company, Beeologics, to ensure they had input into any potentially damaging information that would come out of the bee world.  This company was recognized as one of the leaders in the world on bee research. Now, however, they have fallen under Monsanto’s spell and their objectivity has been lost.


Read more: http://naturalsociety.com/study-links-pesticides-bumblebee-destruction/#ixzz2ExgwnijF
Posted by arclein at 12:00 AM