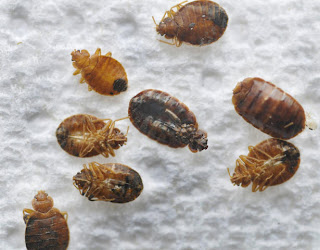 This is one inconvenience that we need to see the back end of quickly. Thus this report is great news and will surely be implemented.

The bed bug has been making a thorough comeback simply because it requires draconian measures with the full commitment of society to eliminate it. Thus when we inevitably lower our guard and give it a chance it gets on board.

In ten years it has gone from zero to been an expensive threat everywhere. Having a powder to produce a hostile environment is a solution that every building manager will be happy to deploy.

Bed bugs are a significant health problem not only in some homes, but also when traveling and staying at hotels, motels, and similar accommodations. Now scientists have discovered a new natural approach to eliminating these pesky, biting creatures, and the research results have been encouraging.

The resurgence of bed bugs in the United States and other countries has triggered great concern about the health and economic implications of their presence. These creatures may be minute, but they are mighty and resistant to elimination methods, as their widespread appearance around the world has illustrated.

Fighting bed bugs has proved to be a challenge, but researchers at Pennsylvania State University may have an answer. It appears that a natural fungus called Beauveria bassiana, which causes disease in insects, is devastating to bed bugs.

Beauveria bassiana is a fungus that kills pests when its spores attach to the insect's skin. The fungus germinates and penetrates the pest's body and over a period of 3 to 5 days, kills the insect.

Senior research associate in entomology Nina Jenkins, who headed the new study, reported that she and her colleagues have been encouraged by the results of their research with bed bugs and the fungus. Basically, all of the bed bugs they exposed to the fungus on either paper or cotton jersey (a common material used in bed linens where bed bugs are often found) died within five days.

The researchers noted other benefits of using the fungus. One, the pests were affected regardless of sex, stage of life, strain of fungus, or feeding status. Two, once the bed bugs were affected by the fungus, they carried it back to their hiding places, which means they infected other bed bugs and thus extended the impact of the fungus.

Jenkins announced that after exposing half a group of bed bugs to the fungus for one hour, "the fungal spores were transferred from the exposed bug to their unexposed companions, and we observed almost a hundred percent infection."

This is a critical finding, because bed bugs are so tiny and can infiltrate areas that are difficult to reach and treat. Bed bugs are often found in bed linens, but they also hide in cracks in the floors and walls, under rugs and carpeting, and even behind wall sockets.

Other treatments for bed bugs

Bed bugs need to be treated at two levels. One is the source: the underlying infestation often requires the services of a professional exterminator, who may need to use both nonchemical treatments along with pesticides. Nonchemical techniques you can take include thoroughly vacuuming your home, including crevices and cracks in the floors and walls; washing bed linens and clothing in water hotter than 120 F to kill bed bugs; placing linens and clothing in a clothes dryer set at medium to high heat for at least 20 minutes; or attempting to freeze the bed bugs by leaving linens and clothing outside in a freezing environment for at least several days.

Professional exterminators often have the ability to use machines to raise the temperature of rooms in your home to a level that will kill bed bugs. Use of these machines does not necessarily guarantee bed bugs hiding deep in mattresses and furniture will die, however.

To treat bed bug bites, you can use hydrocorticone creams or take an oral antihistamine. You can also elect to do nothing and wait through the itching from the bed bug bites, which typically disappears within a week or two.

Discovery of the ability of a fungus to kill bed bugs is exciting, and the investigators are conducting more research. Jenkins noted that "We're working on the next step, and we have more funding to support these studies," which is good news for anyone who is worried about bed bugs.