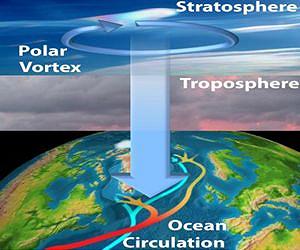 I seriously wish that they would stop trying to link this all to human agency. The time frames for the data are way too short and regardless, it is lousy science to march in with a preconceived assumption.

These types of conclusions really need centuries of comparable data which is mostly impossible to reconstruct for most variables.

We do know that the ozone content of the atmosphere has changed and even this data stream is unfortunately only some sixty years old. Yet it did lead to investigation and the elimination of a non natural man made driver. Such should be done for all chemicals used industrially as a matter of course just to avoid been possibly bit. That has not happened yet.

All other natural risk factors have naturally robust elimination pathways we can generally rely on.

What is most interesting is the observed variation in lowering Stratosphere temperatures and rising Troposphere temperatures. We cannot determine if this is even unusual although we sort of think it is. We need to ask if it is a lagging effect of the ozone variation which I suspect gives us the easiest pathway to causation.

It may even reflect a measured shift in cosmic ray intensity.

So before we attempt to link it to the lower atmosphere which has had an apparent ten percent increase in resident CO2 and little else except a half degree in apparent temperature before flatlining fifteen years ago, these ideas need to be aired.

I suspect that the observed variability could well be normal and generally climate neutral. We need to at least assign a meaningful probability to that been the case and it is not zero. It may even be over fifty percent.

A human-caused climate change signal emerges from the noise

The troposphere is the lowest portion of earth's atmosphere. The stratosphere sits just above the troposphere, between 6 and 30 miles above earth's surface.

By comparing simulations from 20 different computer models to satellite observations, Lawrence Livermore climate scientists and colleagues from 16 other organizations have found that tropospheric and stratospheric temperature changes are clearly related to human activities.

The team looked at geographical patterns of atmospheric temperature change over the period of satellite observations. The team's goal of the study was to determine whether previous findings of a "discernible human influence" on tropospheric and stratospheric temperature were sensitive to current uncertainties in climate models and satellite data.

The troposphere is the lowest portion of earth's atmosphere. The stratosphere sits just above the troposphere, between 6 and 30 miles above earth's surface.

The satellite temperature data sets were produced by three different research groups, and rely on measurements of the microwave emissions of oxygen molecules. Each group made different choices in processing these raw measurements, and in accounting for such complex effects as drifts in satellite orbits and in instrument calibrations.

The new climate model simulations analyzed by the team will form the scientific backbone of the upcoming 5th assessment of the Intergovernmental Panel on Climate Change, which is due out in 2014.

In both satellite observations and the computer model simulations of historical climate change, the lower stratosphere cools markedly over the past 33 years. This cooling is primarily a response to the human-caused depletion of stratospheric ozone.[ This assertion has generally gone unchallenged and I find that disquieting - arclein]

The observations and model simulations also show a common pattern of large-scale warming of the lower troposphere, with largest warming over the Arctic, and muted warming (or even cooling) over Antarctica. Tropospheric warming is mainly driven by human-caused increases in well-mixed greenhouse gases.

"It's very unlikely that purely natural causes can explain these distinctive patterns of temperature change," said Laboratory atmospheric scientist Benjamin Santer, who is lead author of the paper appearing in the Nov. 29 online edition of the journal, Proceedings of the National Academy of Sciences.

"No known mode of natural climate variability can cause sustained, global-scale warming of the troposphere and cooling of the lower stratosphere."

They also looked at simulations with no changes in external influences on climate, which provide information on the year-to-year and decade-to-decade "noise" of internal climate variability, arising from such natural phenomena as the El Nino/Southern Oscillation and the Pacific Decadal Oscillation.
The team used a standard "climate fingerprint" method to search for the model signal pattern (in response to human influences, the sun and volcanoes) in the satellite observations. The method quantifies the strength of the signal in observations, relative to the strength of the signal in natural climate noise.