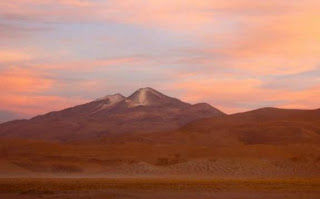 In the end it is all about the potential energy been developed.  In this case, the magma is building up and it is showing this by lifting at least one thousand times as much rock as Mt St Helens at a rate of around ten feet per year. If sustained, It will begin breaking up in the next few centuries and become a super volcano.

More likely it will perhaps burp a couple of times and then go back to sleep for millennia.  It is likely close to the behavior of .

In the meantime we have something to worry about, but not too much.  There are a number of such volcanoes and most are like .  The others however will sometimes ruin everyone’s day. 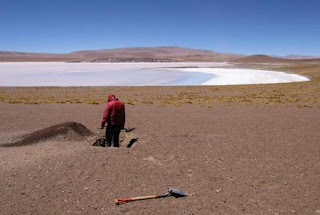 How long has this been going on? Uturuncu, a Bolivian volcano that is inflating at an incredible rate.

Should anyone ever decide to make a show called "CSI: Geology," a group of scientists studying a mysterious and rapidly inflating South American volcano have got the perfect storyline.

Researchers from several universities are essentially working as geological detectives, using a suite of tools to piece together the restive peak's past in order to understand what it is doing now, and better diagnose what may lie ahead.

It's a mystery they've yet to solve.

Uturuncu is a nearly 20,000-foot-high (6,000 meters) volcano in southwest . Scientists recently discovered the volcano is inflating with astonishing speed.

"I call this 'volcano forensics,' because we're using so many different techniques to understand this phenomenon," said professor Shan de Silva, a volcanologist on the research team.

Researchers realized about five years ago that the area below and around Uturuncu is steadily rising — blowing up like a giant balloon under a wide disc of land some 43 miles (70 kilometers) across. Satellite data revealed the region was inflating by 1 to 2 centimeters (less than an inch) per year and had been doing so for at least 20 years, when satellite observations began.

"It's one of the fastest uplifting volcanic areas on Earth," de Silva told OurAmazingPlanet."What we're trying to do is understand why there is this rapid inflation, and from there we'll try to understand what it's going to lead to."

The  peak is perched like a party hat at the center of the inflating area. "It's very circular. It's like a big bull's-eye," said Jonathan Perkins, a graduate student at the University ofCalifornia

, Santa Cruz, who recently presented work on the mountain at this year's Geological Society of America meeting  in Minneapolis.

Scientists figured out from the inflation rate that the pocket of magma beneath the volcano was growing by about 27 cubic feet (1 cubic meter) per second.

However, no need to flee just yet, the scientists said.

"It's not a volcano that we think is going to erupt at any moment, but it certainly is interesting, because the area was thought to be essentially dead," de Silva said.

Uturuncu is surrounded by one of the most dense concentrations of supervolcanoes on the planet, all of which fell silent some 1 million years ago.

Supervolcanoes get their name because they erupt with such power that they typically spew out 1,000 times more material, in sheer volume, than a volcano like Mount St. Helens. Modern human civilization has never witnessed such an event. The planet's most recent supervolcanic eruption happened about 74,000 years ago in .

"These eruptions are thought to have not only a local and regional impact, but potentially a global impact," de Silva said.

Uturuncu itself is in the same class as Mount St. Helens in Washington state, but its aggressive rise could indicate that a new supervolcano is on the way. Or not.

"So that's why it's important to know how long this has been going on," he said.

To find an answer, scientists needed data that stretch back thousands of years — but they had only 20 years of satellite data.

Jonathan Perkins, along with his advisor, Noah Finnegan (he's behind the camera), conduct field work in the barren landscape surrounding the volcano.
CREDIT: Noah Finnegan

"So that's where we come in as geomorphologists — to look for clues in the landscape to learn about the long-term topographic evolution of the volcano," Perkins said.

Perkins and colleagues used ancient lakes, now largely dry, along the volcano's flanks to hunt for signs of rising action.

"Lakes are great, because waves from lakes will carve shorelines into bedrock, which make lines," Perkins said.

If the angle of those lines shifted over thousands of years  — if the summit of the mountain rose, it would gradually lift one side of the lake — it would indicate the peak had been rising for quite some time, or at least provide a better idea of when the movement began.

The local conditions, largely untouched by erosion or the reach of lush plant and animal life, lend themselves to geological detective work, Perkins noted.

"It's a really sparse, otherworldly landscape," Perkins said. "Everything is so well preserved. There's no biology to get in the way of your observations."

Perkins said that surveys conducted on the lakes last autumn didn't indicate long-term inflation. However, tilting lakes are only one indicator of volcano growth, he said.

De Silva said the geological detective team is working to combine data from a number of sources — seismic data, GPS data, even minute variations in gravity — to pin down when and why the mountain awoke from its 300,000-year-long slumber, and better predict its next big move.