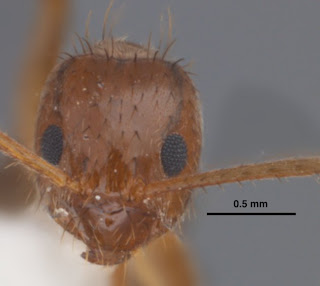 Another annoying non native ant pest is making its presence known throughout the .  Since they reside in sheltered moist spots, the first line of defense must be to simply clean up the property, as inconvenient as that often is.  I do not think they actually interfere much with horticulture per se but I may be wrong on that.

Now if we can find their natural enemies who do not jump onto something useful we may quiet them down.

In the meantime it is a given that this critter will establish itself throughout the natural range.  Bales of hay do travel.

(AP) — It sounds like a horror movie: Biting ants invade by the millions. A camper's metal walls bulge from the pressure of ants nesting behind them. A circle of poison stops them for only a day, and then a fresh horde shows up, bringing babies. Stand in the yard, and in seconds ants cover your shoes.

It's an extreme example of what can happen when the ants — which also can disable huge industrial plants — go unchecked. Controlling them can cost thousands of dollars. But the story is real, told by someone who's been studying ants for a decade.

He's been back to check on the hairy crazy ants. They're still around. The occupant isn't.

The flea-sized critters are called crazy because each forager scrambles randomly at a speed that your average picnic ant, marching one by one, reaches only in video fast-forward. They're called hairy because of fuzz that, to the naked eye, makes their abdomens look less glossy than those of their slower, bigger cousins.

And they're on the move in , , and . In , they've invaded homes and industrial complexes, urban areas and rural areas. They travel in cargo containers, hay bales, potted plants, motorcycles and moving vans. They overwhelm beehives — one beekeeper was losing 100 a year in 2009. They short out industrial equipment.

If one gets electrocuted, its death releases a chemical cue to attack a threat to the colony, said Roger Gold, an entomology professor at Texas A&M.

"The other ants rush in. Before long, you have a ball of ants," he said.

A computer system controlling pipeline valves shorted out twice in about 35 days, but monthly treatments there now keep the bugs at bay, said exterminator Tom Rasberry, who found the first specimens of the species in the area in 2002.

"We're kind of going for overkill on that particular site because so much is at stake," he said. "If that shuts down, they could literally shut down an entire chemical plant that costs millions of dollars."

And, compared to other ants, these need overkill. For instance, Gold said, if 100,000 are killed by pesticides, millions more will follow.

But the story is an exception, Rasberry said. Control is expensive, ranging from $275 to thousands of dollars a year for the 1,000 homes he's treated in the past month. Still, he's never seen the ants force someone out of their home, he said.

The ants don't dig out anthills and prefer to nest in sheltered, moist spots. In MacGown's extreme example in , the house was out in woods with many fallen trees and piles of debris. They will eat just about anything — plant or animal.

The ants are probably native to , MacGown said. But they were recorded in the Caribbean by the late 19th century, said Jeff Keularts, an extension associate professor at the University of the . That's how they got the nickname " crazy ants." They've also become known as Rasberry crazy ants, after the exterminator.

Now they're making their way through parts of the Southeast. had the ants in about five counties in 2000 but today is up to 20, MacGown said. Nine years after first being spotted in , that state now has them in 18 counties. So far, they have been found in two counties in and at least one parish.

Texas has temporarily approved two chemicals in its effort to control the ants, and other states are looking at ways to curb their spread.

Controlling them can be tricky. Rasberry said he's worked jobs where other exterminators had already tried and failed. Gold said some infestations have been traced to hay bales hauled from one place to another for livestock left without grass by the drought that has plagued .

MacGown said he hopes their numbers are curbed in and before it's too late.

The hairy crazy ants do wipe out one pest — fire ants — but that's cold comfort.

"I prefer fire ants to these," MacGown said. "I can avoid a fire ant colony."

I recommend trying diatomacious earth. It's non-toxic but kills all chitin-skinned insects.