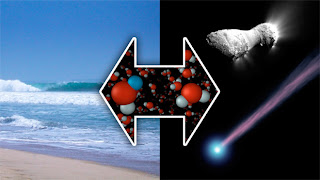 The take home is that a Kuiper belt comet has finally given us the isotope blend that conforms to Earth’s own composition in terms of its water.  Comets were always the obvious source of our surface water and also a huge amount of carbon, although that is not recognized.

It would be useful to actually compare the simple mass of water of Earth with the simple mass of carbon with some accuracy, but I suspect that to be nearly impossible when one considers how many ways either is bound geologically in the first hundred miles of rock.

However, it would take only one or two large comets to actually accomplish what needed to be done.  That happens to be a lot more believable than a period of mass bombardment bringing enough water from asteroids when we can look at the moon and mercury and at Mars and see scant water.  Did no one ever think to ask why we are so special?

Once that has happened, water bodies will rapidly form to provide refugia for inoculation with Earth based life which will then accelerate the conversion process.  In less than a thousand years after land fall, all the surface heat should be fully absorbed on Venus including quite deep into the rock itself.  At least the surface rock will be at or lower that the boiling temperature of water and quickly on the way to much lower.

Obviously this all happened at least once on Earth, albeit vast epochs of time ago.  I have ample reason to suspect that Venus is a much more recent enterprise and a natural one for newly emergent intelligent life in this solar system.  After all it provides a second planetary home to back up life on Earth.

In previous posts I observed that adding an Earth sized mass of rock in the form of directing many asteroids into Jupiter serves to take it over its stability point and causes such a mass to be spun out of Jupiter.  The red spot on Jupiter is direct evidence that this may even have happened!  Such a newly formed planet would fall into an Earth like orbit and circularizes very quickly.  It would look exactly like Venus whose surface temperature at 900 degrees is barely below that of molten rock.  It has barely cooled.

I also posted that Jupiter is our solar system’s planet production machine and the rest were done at the beginning.

New measurements from the Herschel Space Observatory show that comet Hartley 2, which comes from the distant Kuiper Belt, contains water with the same chemical signature as water in Earth's oceans. NASA/JPL-Caltech/R. Hurt

Some of the water that covers much of the Earth may have been carried here by comets from beyond , new evidence suggests.

The water in a comet called 103P/Hartley 2 is chemically very similar to water on Earth, suggesting that some of Earth's water comes from the same comet family, reports an international study led by Paul Hartogh at the Max-Planck-Institut fur Sonnensystemforschung and published Wednesday in Nature.

103P/Hartley 2 is believed to come from the Kuiper belt beyond the orbit of .

Most of the Earth is very similar in composition to meteorites called enstatite chondrites, which suggests that it similarly started off very dry.

Scientists think asteroids and comets may have subsequently crashed into the Earth, transporting water in the process.

Water is made of hydrogen and oxygen molecules, and hydrogen comes in both a lighter and heavier form called deuterium. The ratio of the two forms on Earth is very distinctive.

Six comets measured in the past, which were thought to originate in the Oort cloud near the gas giant planets, had water with deuterium-to-hydrogen ratios very different from those on Earth.

That led scientists to propose that most of the water on Earth came from asteroids, which have water with a deuterium-to-hydrogen ratio more similar to Earth.

Hartogh and his collaborators measured the deuterium-to-hydrogen ratio in the water of 103P/Hartley 2 using instruments on the Herschel Space Observatory. The ratio they found is only slightly higher than the ratio found in Earth's water.

The Herschel Space Observatory is a telescope that orbits 1.5 million kilometres from Earth on the side away from the sun called the second Lagrangian point. One of its primary goals is to observe the chemical composition of the atmospheres and surfaces of comets, planets and satellites in our solar system. It is scheduled to remain in operation until the end of 2012.