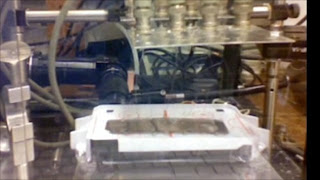 It appears to be some sort of ground effects sheet that works without using a compressor.  It may allow for scaling up and may also allow for much larger loads than presently imagined.

Again we can imagine a loaded container on a sheet happily scooting along.  It can be done with a compressor and should be done as per past posts of mine.  If this technology could be scaled up to that size then a lot of transport problems quickly disappear.

The limited description suggests that force direction change is also possible here.  In that case local control becomes possible and more problems in engineering and hardware again are eliminated.

We do not know yet were this may go, but it will bear watching.

The sheet is lifted by the air packets, and propelled forwards

The 10cm (4in) sheet of smart transparency is driven by "ripple power"; waves of electrical current driving thin pockets of air from front to rear underneath.

The prototype, described in Applied Physics Letters, moves at speeds of about a centimetre per second.

Improvements to the design could raise that to as much as a metre per second.

The device's creator, graduate student Noah Jafferis, says he was inspired by a mathematical paper he read shortly after starting his PhD studies at .

He abandoned what would have been a fashionable project printing electronic circuits with nano-inks for one that seemed to have more in common with 1001 Nights than 21st-Century engineering.

"What was difficult was controlling the precise behaviour of the sheet as it deformed at high frequencies," he told the BBC.

"Without the ability to predict the exact way it would flex, we couldn't feed in the right electrical currents to get the propulsion to work properly."

What followed was a two year digression attaching sensors to every part of the material so as to fine-tune its performance through a series of complex feedbacks.

But once that was mastered, the waveform of the undulating matched that prescribed by the theory, and the wafting motions gave life to the tiny carpet.

In the paper describing the design, Mr Jafferis and his co-authors are careful to keep the word "flying" in inverted commas, because the resulting machine has more in common with a hovercraft than an aeroplane.

"It has to keep close to the ground," Mr Jafferis explained to the BBC's Science in Action, "because the air is then trapped between the sheet and the ground. As the waves move along the sheet it basically pumps the air out the back." That is the source of the thrust.

Harvard University's Lakshminarayanan Mahadevan, who wrote the 2007 paper in Physical Review Letters that inspired the whole project, expressed a mixture of surprise and delight at the team's success.

"Noah has gone beyond our simple theory and actually built a device that works," he told the BBC "And what's more, it behaves, at least qualitatively, as we had predicted."

Mr Jafferis points out that the prototype is limited because tiny conducting threads anchor it to heavy batteries, so it's free to move only a few centimetres. But he is already working on a solar-powered upgrade that could freely fly over large distances.

The advantage of this kind of propulsion, he argues, is that unlike jets, propellers and hovercraft, there are no moving components like cogs and gears that rub against each other.

"The ideal use would be some kind of dusty, grimy environment where moving parts would get gummed up and stop," he explained.

That said, he laughingly admits that with the existing materials, a flying carpet powerful enough to carry a person would need a wingspan of 50 metres - not the best vehicle to take on the streets just yet.

On the other hand, preliminary calculations suggest that there is enough atmosphere on the planet Mars to send floating rovers scudding over its dusty surface.

Meanwhile, Prof Mahadevan looks forward to sophisticated improvements in the near future, suggesting the approach could progress to "mimicking the beautiful two-dimensional undulations of the skate or manta ray".
Posted by arclein at 12:01 AM