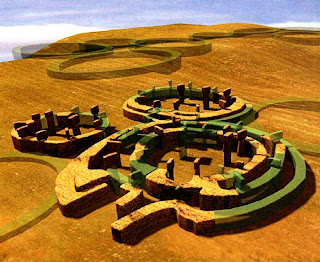 At least the knee jerk conclusion regarding these ancient structure is been properly challenged.  Large structures have several plausible rationales and are just not automatically temples which simply may not have been part of anyone’s culture at the time.  The Northwest plank houses are a glowing admonition against such thinking.  They are recent systems that organized communal living.

In fact, I suspect that was the cause of early large buildings simply because early societies lack the theology and the idea of separation.  Our own thinking is influenced by the remnants of a global Bronze Age theology that promoted sacrificial pyramids of one form or the other.  In other posts I also argue that this global culture was Atlantean and lasted from around 3000 BC through 1159 BC.  This culture was certainly built around palaces and temple complexes and a sustaining bronze trade and manufactory.

Yet to presume anything like this applied to the preceding stone culture is surely wrong.

Another aspect of communal housing needs to be recalled.  It requires a ready supply of storable food.  The Northwest had smoked and dried salmon.  Likely the then forested country provided large annual game migrations that supplied the surplus protein.  Retracing those routes should allow for the discovery of additional complexes if they exist.

This is at least a good working conjecture for future research.

Archaeologist argues world's oldest temples were not temples at all

Ancient structures uncovered in Turkey and thought to be the world's oldest temples may not have been strictly religious buildings after all, according to an article in the October issue of Current Anthropology. Archaeologist Ted Banning of the argues that the buildings found at Göbekli Tepe may have been houses for people, not the gods.

The buildings at Göbekli, a hilltop just outside of the Turkish city of , were found in 1995 by Klaus Schmidt of the German Archaeological Institute and colleagues from the in . The oldest of the structures at the site are immense buildings with large stone pillars, many of which feature carvings of snakes, scorpions, foxes, and other animals.

The presence of art in the buildings, the substantial effort that must have been involved in making and erecting them, and a lack of evidence for any permanent settlement in the area, led Schmidt and others to conclude that Göbekli must have been a sacred place where pilgrims traveled to worship, much like the Greek ruins of Delphi or Olympia. If that interpretation is true it would make the buildings, which date back more than 10,000 years to the early Neolithic, the oldest temples ever found.

However, Banning offers an alternative interpretation that challenges some of Schmidt's claims.

He outlines growing archaeological evidence for daily activities at the site, such as flintknapping and food preparation. "The presence of this evidence suggests that the site was not, after all, devoid of residential occupation, but likely had quite a large population," Banning said.

Banning goes on to argue that the population may have been housed in the purported temples themselves. He disagrees with the idea that the presence of decorative pillars or massive construction efforts means the buildings could not have been residential space.

"The presupposition that 'art,' or even 'monumental' art, should be exclusively associated with specialized shrines or other non-domestic spaces also fails to withstand scrutiny," Banning writes. "There is abundant ethnographic evidence for considerable investment in the decoration of domestic structures and spaces, whether to commemorate the feats of ancestors, advertise a lineage's history or a chief's generosity; or record initiations and other house-based rituals."

Archaeological evidence for domestic art from the Neolithic period exists as well, Banning says, such as the wall paintings at Çatalhöyük, another archaeological site in .

Banning suggests that the purported temples may instead have been large communal houses, "similar in some ways to the large plank houses of the of with their impressive house posts and totem poles."

"If so, they would likely have housed quite large households that might provide an extremely early example of what the French anthropologist, Claude Lévi-Strauss, called 'house societies,'" Banning said. "Such societies often use house structures for competitive display, locations for rituals, and explicit symbols of social units."

Banning hopes that more excavation at the site will ultimately shed more light on how these buildings were used. In the meantime, he hopes that researchers will not automatically assume that the presence of art or decoration in structures at Göbekli and elsewhere denotes an exclusively religious building.

"It is … likely that some of these buildings were the locus for a variety of rituals, probably including feasts, mortuary rites, magic, and initiations," he writes. "Yet there is generally no reason to presume a priori, even when these are as impressive as the buildings at Göbekli Tepe, that they were not also people's houses."