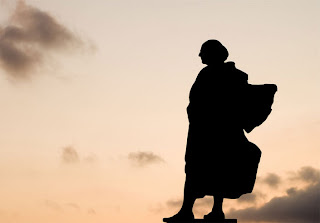 The great achievement of was to discover how to return to after taking the winds out.  Many others had disappeared in the same direction and never returned, quite rightly discouraging adventurers.  His observation of the returning winds in the northern latitudes clinched the deal.

Unfortunately, far too many are also quick to hang him with results of the European onslaught of the which is grossly unfair and completely wrong.  Simultaneous onslaughts into Africa were readily contained and repulsed by societies far less organized or advanced as the societies found in the .

All he did was open the door to European adventurers to cut themselves free from the crown and then run amok among societies unable to outright defeat them and who were also unable to counter the onslaught with nasty native diseases.  In fact simple European diseases felled millions completely out of European sight.  All this made Cortes and Pissarro possible and amazingly sustainable after the fact.  It was still a lucky barbarian invasion that ran away outside any man’s control and long after .

Without the intervention of the disease card, the would never have been truly conquered and would more resemble the settlement patterns in in which colonizers are today few.

Monday is Columbus Day, time to buy appliances on sale and contemplate other things that have nothing to do with Christopher Columbus. So much of what we say about is either wholly untrue or greatly exaggerated. Here are a few of the top offenders.

1. set out to prove the world was round.

If he did, he was about 2,000 years too late. Ancient Greek mathematicians had already proven that the Earth was round, not flat. Pythagoras in the sixth century B.C.E. was one of the originators of the idea. Aristotle in the fourth century B.C.E. provided the physical evidence, such as the shadow of the Earth on the moon and the curvature of the Earth known by all sailors approaching land. And by the third century B.C.E., Eratosthenes determined the Earth's shape and circumference using basic geometry. In the second century C.E., Claudius Ptolemy wrote the "Almagest," the mathematical and astronomical treatise on planetary shapes and motions, describing the spherical Earth. This text was well known throughout educated Europe in ' time. [Related: Earth Is Flat in Many People's Minds]

Columbus, a self-taught man, greatly underestimated the Earth's circumference. He also thought Europe was wider than it actually was and that was farther from the coast of than it really was. For these reasons, he figured he could reach Asia by going west, a concept that most of educated Europe at the time thought was daft — not because the Earth was flat, but because Columbus' math was so wrong. Columbus, in effect, got lucky by bumping into land that, of course, wasn't .

The flat-earth myth perhaps originated with 's 1828 biography of ; there's no mention of this before that. His crew wasn't nervous about falling off the Earth.

Yes, let's ignore the fact that millions of humans already inhabited this land later to be called the , having discovered it millennia before. And let's ignore that whole Leif Ericson voyage to Greenland and modern-day around 1000 C.M.E. If discovered , he himself didn't know. Until his death he claimed to have landed in , even though most navigators knew he didn't. [Top 10 Intrepid Explorers]
What "discovered" was the archipelago and then the island later named Hispaniola, now split into and the . On his subsequent voyages he went farther south, to Central and . He never got close to what is now called the United States

So why does the United States celebrate the guy who thought he found a nifty new route to Asia and the lands described by Marco Polo? This is because the early United States

was fighting with , not . John Cabot (a.k.a. Giovanni Cabot, another Italian) "discovered" in 's name around 1497 and paved the way for 's colonization of most of . So the American colonialists instead turned to as their hero, not 's Cabot. Hence we have the capital, , — that's , not District of Cabot.

This is hotly debated. Syphilis was presented in pre-Columbus . Yet syphilis likely existed for millennia in , as well, but simply wasn't well understood. The ancient Greeks describe lesions rather similar to that from syphilis. Perhaps by coincidence, an outbreak of syphilis occurred in in 1494 during a French invasion, just two years after ' return. This sealed the connection.

But aside from descriptions of syphilis-like lesions by Hippocrates, many researchers believe that there was a syphilis outbreak in, of all places, a 13th-century Augustinian friary in the English of upon . This coastal city saw a continual influx of sailors from distant lands, and you know what sailors can do. Carbon dating and DNA analysis of bones from the friary support the theory of syphilis being a worldwide disease before ' voyages.

wasn't a rich man when he died in at age 54 in 1506. But he wasn't impoverished. He was living comfortably, economically speaking, in an apartment in , Crown of , in present-day , albeit in pain from severe arthritis. had been arrested years prior on accusations of tyranny and brutality toward native peoples of the . But he was released by King Ferdinand after six weeks in prison. He was subsequently denied most of the profits of his discoveries promised to him by Ferdinand and Queen Isabella.

After his death, though, his family sued the royal crown, a famous lawsuit known as the Pleitos colombinos, or Columbian lawsuits, lasting nearly 20 years. ' heirs ultimately secured significant amounts of property and other riches from the crown. Also, most European navigators understood by the end of the 15th century, before his death, that Columbus had discovered islands and a large landmass unknown to them.

With all this talk of a hapless accidentally discovering the New World, as well as the subsequent genocide of native cultures, it is easy to understand the current backlash against and the national holiday called Columbus Day, celebrated throughout North and . This isn't entirely fair.

While was wrong about most things, he did help establish knowledge about trade winds, namely the lower-latitude easterlies that blow toward the Caribbean and the higher-latitude westerlies that can blow a ship back to . Also, while wasn't the first European to reach the , he was the first European to stay. His voyages directly initiated a permanent presence of Europeans in both North and .

News of the success of his first voyage spread like wildfire through , setting the stage for an era of European conquest. One can argue whether the conquest was good or bad for humanity: that is, the spread of Christianity, rise of modernism, exploitation and annihilation of native cultures, and so on. But it is difficult to deny ' direct role in quickly and radically changing the world.

Christopher Wanjek is the author of the books "Bad Medicine" and "Food At Work." His column,Bad Medicine, appears regularly on LiveScience.
Posted by arclein at 12:01 AM