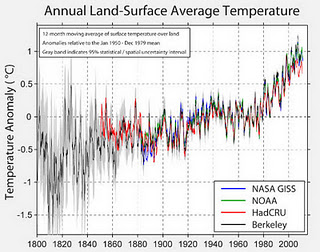 At least researcher are seriously tackling the problem and attempting to plausibly get it right.  The bottom line is that they feel that the globe’s land temperature has increased a whole degree.

The actual assertion in terms of scale is around twice what I had anticipated.  This strongly suggests that the Holocene maximum minima of plus or minus one degree should have a half degree error adjustment.

The unanswered question is what has been the actual increase in ocean temperatures and heat volume over the past two decades.

Wattsupwiththat.com notes that this study pulls from 90-95% of the same raw data as previous studies and that it has not been peer reviewed yet.


The new study does not try to determine the cause of global warming, that is how much is from human causes.


The Nextbigfuture position is that outdoor air pollution is the immediate health and economic threat that is causing the premature death of 1.3 million people each year andbirth defects and other disease and sickness.


* get 700 million soot free cookers to the developing world. Costs about $70 billion. Would save 1.9 million lives per year from indoor air pollution and the lowered soot would equal an 8% of current carbon dioxide reduction. It would also save more lives with solar cookers by allowing developing people to boil more water without considering fuel costs and reduce health problems and death from unclean water

The Earth Surface Temperature study finds reliable evidence of a rise in the average world land temperature of approximately 1°C since the mid-1950s.

Analyzing temperature data from 15 sources, in some cases going as far back as 1800, the Earth study directly addressed scientific concerns raised by skeptics, including the urban heat island effect, poor station quality, and the risk of data selection bias.

The Earth team is making these preliminary results public, together with the programs and data set in order to invite additional scrutiny as part of the peer review process.

The Earth study concludes that:

− The urban heat island effect is locally large and real, but does not contribute significantly to the average land temperature rise. That’s because the urban regions of the Earth amount to less than 1% of the land area.

− About 1/3 of temperature sites around the world reported global cooling over the past 70 years (including much of the and northern ). But 2/3 of the sites show warming. Individual temperature histories reported from a single location are frequently noisy and/or unreliable, and it is always necessary to compare and combine many records to understand the true pattern of global warming.

“The large number of sites reporting cooling might help explain some of the skepticism of global warming,” Rohde commented. “Global warming is too slow for humans to feel directly, and if your local weather man tells you that temperatures are the same or cooler than they were a hundred years ago it is easy to believe him.” In fact, it is very hard to measure weather consistently over decades and centuries, and the presence of sites reporting cooling is a symptom of the noise and local variations that can creep in. A good determination of the rise in global land temperatures can’t be done with just a few stations: it takes hundreds or better, thousands of stations to detect and measure the average warming. Only when many nearby thermometers reproduce the same patterns can we know that the measurements were reliably made.


Four scientific papers setting out these conclusions have been submitted for peer review and will form part of the literature for the next IPCC report on Climate Change.