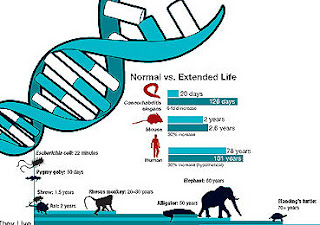 Of course it is.  It is no longer a research long shot.  It is also obvious that health restoration supported by at least a partial reversal of aging damage at the cellular level would return a citizen to economic productiveness.  Death will still arrive soon enough, but vigorous strength and health is a preferred option.

The original claims about the family of Noah in the Hebrew Bible are worth recalling.  They lived into ages that approached in one case a thousand years and seemed to have no difficulty reaching 200 through 500.  In a previous post we discussed the strong likelihood that this part of Genesis is drawn from the original history written about the human colony landed near Ararat for the purpose of introducing both agriculture and the modern human stock.  I go on to suggest other such colonies were put in place world wide approximately ten thousand years ago, fully equipped to initiate agriculture.

Thus restoring just that capability is plausibly now within our reach inside the next thirty years and it is to be a sought for solution.

It will take some time before the general population picks up on this potential, but it suggests that planning one’s life path should now include this prospect and include the expectation of later reeducation to develop additional skills.

Is longevity research speeding up?

The writer and columnist Sonia Arrison has recently published 100 plus in which she describes the coming "age of longevity". Arrison argues that the fields of tissue engineering , as well as gene therapy and stem cell research, are experiencing rapid growth. In an interview with Sander Olson, Arrison discusses why longevity research will be more affected by incremental advances rather than dramatic breakthroughs, why the DOD is funding longevity related research, and why she believes that the first human heart derived from tissue engineering will emerge within the next twenty years.
Sonia Arrison

Question: You recently attended the SENS5 conference. How did that go?

The conference itself was high quality – many of the scientists that I describe in my book, 100+, were there. Hearing about the tangible progress that these researchers are continually making was very exciting. I noticed that there were many companies that attended this conference, which is an indication that extending health span is a prospect which is starting to garner serious consideration.

Question: How many companies focused on anti-aging are there?

There are a large and growing number of corporations which, although not explicitly focused on anti-aging, are developing treatments and drugs related to longevity. Gene therapy and personalized medicine are the future, and these companies know that.
Question: Is there any aspect of anti-aging research that is garnering substantial funding?

The field of regenerative medicine is getting substantial resources. That includes tissue engineering, which is essentially growing organs. The recent successes with growing and implanting human tracheas are exciting.

Question: Aubrey de Grey believes that when certain longevity milestones are met, the anti-aging field will get all the resources that it needs. Do you agree?

A big breakthrough would undoubtedly be beneficial. There is no doubt that he is working on an important theory of human rejuvenation and that he has done much to garner attention on the subject. That said, I see progress coming more from a series of relatively modest advances, rather than from a single breakthrough.

Question: Why is the Department of Defense pushing longevity related research?

The DOD is funding regenerative medicine research because they want to be able to regrow limbs for soldiers who have been injured in war. The upside of this is that these techniques will benefit the general population. It is now possible to grow functional human bladders, windpipes, and blood vessels in the lab. Soon, scientists will be able to grow other organs as well. One of the leaders in this field is Dr. Anthony Atala at the Wake Forest Institute for Regenerative Medicine.

Question: What concern regarding anti-aging research do you hear most frequently?

The most common concern is that increased life spans will lead to overpopulation. This fear rests on the false Malthusian idea that population grows faster than our ability to provide for ourselves. We haven’t run out of resources as population has grown because humans are a resource themselves, providing problem-solving ideas. Also, fertility and world population growth rates are on the decline.

Question: Is the perception of longevity research changing?

Perceptions have changed. The term health extension is actually less controversial than life extension, since everyone wants robust health. There is little resistance to treatments designed to keep people healthy.

Question: Some researchers argue that some form of artificial intelligence will be necessary to master biological processes. Do you agree?

I believe that AI could be incredibly helpful in helping us learn how to reverse engineer human code. Many of the building blocks are already there, but putting them together will be done by both humans and computers. A true AI program would be hugely helpful for that.

Question: You don't mention timeframes much in your book. When is the earliest that we could see a breakthrough in the anti-aging field?

As I've mentioned, I think that advances will result more from incremental progress rather than single breakthroughs. Fighting cancer is a perfect example - cancer is actually a series of diseases, so I don't see anyone announcing that they've cured Big “C” cancer. Rather, I see treatments for various cancers improving until cancer is no longer a major killer. Similarly with longevity research I predict that life expectancy will continue to rise indefinitely.

Question: When is your best guess as to when the first human artificial heart will be created?

Although I hesitate to make specific predictions, I am confident that it will happen within ten to twenty years. The requisite fields are expanding exponentially, so even though a plethora of technical challenges remain, the task will be accomplished within the next few decades.

Question: You note the efficacy of X-Prizes in 100+. If you could create and sponsor one X-Prize, what would it be?

I would love to see an X-Prize for gene-therapy to slow down ageing.

Yes, and that’s why scholars such as epidemiologist S. Jay Olshansky have argued for something called the “The Longevity Dividend.” He and others have shown that decelerating human aging by only seven years “would yield health and longevity benefits greater than what would be achieved with the elimination of cancer or heart disease.” Clearly, there are great economic and societal benefits to extending the average human health span.
Posted by arclein at 12:01 AM