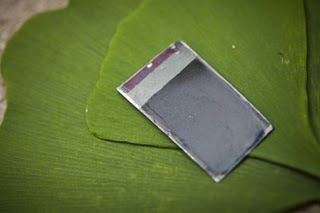 This at least sounds like it might have practical application.  The efficiency is low, but so too is the efficiency of almost all solar cell technologies. Most of those started with 2 to 5 percent efficiencies and went from there.

Most important it sounds like it could be cheap and that it could also be adapted to a plastic substrate to bring costs down.  The end result appears to be two separate streams of gas while the protocol is not as efficiency sensitive as other protocols.

If the working material is cheap enough, it should be easily integrated into a green house and the hydrogen conveniently stored and used on demand.

Otherwise it is a nice bit of technology that can at least be used in custom situations.

The artificial leaf — a silicon solar cell with different catalytic materials bonded onto its two sides — needs no external wires or control circuits to operate. Simply placed in a container of water and exposed to sunlight, it quickly begins to generate streams of bubbles: oxygen bubbles from one side and hydrogen bubbles from the other. If placed in a container that has a barrier to separate the two sides, the two streams of bubbles can be collected and stored, and used later to deliver power: for example, by feeding them into a fuel cell that combines them once again into water while delivering an electric current.


The 'artificial leaf,' a device that can harness sunlight to split water into hydrogen and oxygen without needing any external connections, is seen with some real leaves, which also convert the energy of sunlight directly into storable chemical form. Photo: Dominick Reuter

Journal Science - Wireless Solar Water Splitting Using Silicon-Based Semiconductors and Earth-Abundant Catalysts
We describe the development of solar water-splitting cells comprising earth-abundant elements that operate in near-neutral pH conditions, both with and without connecting wires. The cells consist of a triple junction, amorphous silicon photovoltaic interfaced to hydrogen and oxygen evolving catalysts made from an alloy of earth-abundant metals and a cobalt|borate catalyst, respectively. The devices described herein carry out the solar-driven water-splitting reaction at efficiencies of 4.7% for a wired configuration and 2.5% for a wireless configuration when illuminated with 1 sun of AM 1.5 simulated sunlight. Fuel-forming catalysts interfaced with light-harvesting semiconductors afford a pathway to direct solar-to-fuels conversion that captures many of the basic functional elements of a leaf.
The device, Nocera explains, is made entirely of earth-abundant, inexpensive materials — mostly silicon, cobalt and nickel — and works in ordinary water. Other attempts to produce devices that could use sunlight to split water have relied on corrosive solutions or on relatively rare and expensive materials such as platinum.


The artificial leaf is a thin sheet of semiconducting silicon — the material most solar cells are made of — which turns the energy of sunlight into a flow of wireless electricity within the sheet. Bound onto the silicon is a layer of a cobalt-based catalyst, which releases oxygen, a material whose potential for generating fuel from sunlight was discovered by Nocera and his co-authors in 2008. The other side of the silicon sheet is coated with a layer of a nickel-molybdenum-zinc alloy, which releases hydrogen from the water molecules.