Feed a Cold -- Starve a Tumor 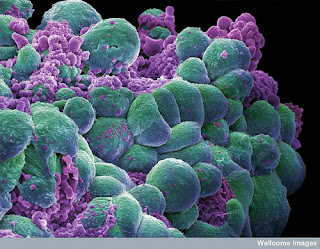 Tumor glucose dependence has been well know from early days but not so obviously exploited.  That may now be overcome and this could become good clinical therapy.

Simply starving the tumor allows other methods to be applied also as the process is slowed.

The use of toxins is naturally controversial in chemo, but starvation is not.  Perhaps this can be applied quickly.

Feed a Cold -- Starve a Tumor

ScienceDaily (Oct. 21, 2011) — The condition tuberous sclerosis, due to mutation in one of two tumor suppressor genes, TSC1 or TSC2, causes the growth of non-malignant tumors throughout the body and skin. These tumors can be unsightly and cause serious damage to organs. Growth of tumors in the brain may cause seizures and in the kidney, liver or heart, tumors can disrupt normal function, to the extent of causing the organ to fail. New research published in BioMed Central's open access journalCell and Bioscience shows that the growth of glucose-dependent TSC-related tumors can be restricted by 2-deoxyglucose, which blocks glucose metabolism, but not by restricting dietary carbohydrates.

TSC1 and TSC2 normally inhibit the mTOR signaling pathway but if the TSC genes are mutated, so that they no longer function, unregulated mTORC1 drives glycolysis and cell growth. Rapamycin works by blocking mTORC1 and is currently used to treat tuberous sclerosis. However, rapamycin is an immunosuppressant and can have significant side effects, especially when used long term. A group of researchers from the , led by Prof Raymond S. Yeung, looked in detail at the potential of blocking cell proliferation by directly reducing glycolysis.

Surprisingly TSC2-negative tumors in mice kept on an unrestricted carbohydrate-free diet grew bigger than those on a western-style diet. However the glucose analogue, 2-deoxyglucose (2DG), which disrupts glucose metabolism, reduced the tumor size in mice on either diet. Prof Yeung explained: "Treatment with 2DG significantly reduced the rate at which the tumor cells divided, especially when paired with a diet which contained carbohydrates. This combination of 2DG and a western-style diet imposed the greatest energy stress on the tumors and correlated with the lowest levels of serum glucose. On the other hand, while the carbohydrate-free (and high-fat) diet provided enough free fatty acids to sustain tumor growth, some of the saturated fatty acids appeared toxic to the tumor cells. This in turn led to an accumulation of liquefied, necrotic materials that contributed to greater tumor size."

Compounds such as 2DG are able to inhibit TSC2-negative tumor growth by restricting glycolysis in a manner not seen by reducing dietary glucose. 2DG is currently undergoing trials for use in prostate cancer. This and other metabolic interventions hold promise for future cancer treatment.