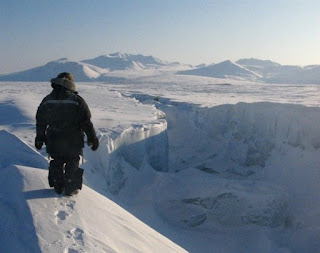 These ice shelves are believed to have survived since their establishment some 4500 years ago which is probably a figure we should question carefully rather than blindly rely on it.  It seems certain however, that the Medieval warming spell failed to attack these same shelves, so it seems reasonable that the is clearly receiving more heat than at any time since the Bronze Age.

It is hard not to attempt to associate that somehow with some form of human intervention although that again is suspect.  We have already identified a plausible 1000 year cycle that coincidentally provides us a few centuries of warmer temperatures.  Add in the massive impact of forest clearing and hugely expanded agriculture and we certainly have room for an adjustment upward.

Yet the argument that the atmosphere may be holding more heat is tenuous at best.  I am also conscious of the fact that the big event is taking place in the .  In the we have circumpolar weather gyre as well as a sea current gyre that can expand and shrink and also go its own way.

There is evidence that the current flows into the Arctic have somewhat been adjusted and the result has been an increase of ocean heat itself been injected into the .  This conforms nicely to the apparent thousand year cycle and known past warm cycle during the Bronze Age in which the Gulf Stream was a couple of degrees warmer.

As I posted now four years ago, this heat injection is essentially a constant each year and it has been at work since at least the seventies.  I also posted that the effect of this constant on the sea ice was non linear and would culminate with a full collapse by 2012.  After I made that statement, NASA showed up with a news release saying the same thing without saying why in order to cover their backside.  I am sure they had long since made the same calculation and were held back from saying a thing.

The final collapse of the ice shelves and the severe reduction of multi season ice has pretty well got the job done.  The Arctic sea ice is now moving to a new equilibrium between last years ice remaining unmelted because of its location in the gyre and that which is completely melted at season’s end.  The unmelted ice will then rotate into the melting zone during the next season.  The cycle itself is likely longer than that but with the disappearance of the ice shelves, we are well on the way to having an annual sea ice gyre that shows a lot of ice cover but all of which is eliminated far quicker than ever in the past.

The interesting question that remains is whether we will actually have the sea ice gyre much reduced from its present apparent extent.  It can still get a lot thinner in terms of overall mass, but it may still sustain coverage.

Regardless, shipping is now becoming practical and even predictable.  Both routes, once legendary are now real.

By CHARMAINE NORONHA - Associated Press | A

The loss is important as a marker of global warming, returning the Canadian to conditions that date back thousands of years, scientists say. Floating icebergs that have broken free as a result pose a risk to offshore oil facilities and potentially to shipping lanes. The breaking apart of the ice shelves also reduces the environment that supports microbial life and changes the look of 's coastline.

Luke Copland is an associate professor in the geography department at the who co-authored the research. He said the Serson Ice Shelf shrank from 79.15 square miles (205 square kilometers) to two remnant sections three years ago, and was further diminished this past summer.

"It has dramatically broken apart in two separate areas and there's nothing in between now but water," said Copland.

Copland said those two losses are significant, especially since the Ward Hunt Ice Shelf has always been the biggest, the farthest north and the one scientists thought might have been the most stable.

"Recent (ice shelf) loss has been very rapid, and goes hand-in-hand with the rapid sea ice decline we have seen in this decade and the increasing warmth and extensive melt in the Arctic regions," said Ted Scambos, lead scientist at the National Snow and Ice Data Center at the University of Colorado, remarking on the research.

Copland, who uses satellite imagery and who has conducted field work in the Arctic every May for the past five years, said since the end of July, pieces equaling one and a half times the size of have broken off. Co-researcher Derek Mueller, an assistant professor at 's geography and environmental studies department, said the loss this past summer equals up to three billion tons. Copland said their findings have not yet been peer reviewed since the research is new, but a number of scientists contacted by The Associated Press reviewed the findings, agreeing the loss in volume of ice shelves is significant.

Scambos said the loss of the Arctic shelves is significant because they are old and their rapid loss underscores the severity of the warming trend scientists see now relative to past fluctuations such as the Medieval Warm Period or the warmer times in the pre-Current Era (B.C.).

Ice shelves, which began forming at least 4,500 years ago, are much thicker than sea ice, which is typically less than a few feet (meters) thick and survives up to several years.

has the most extensive ice shelves in the Arctic along the northern coast of . These floating ice masses are typically 131 feet (40 meters) thick (equivalent to a 10-story building), but can be as much as 328 feet (100 meters) thick. They thickened over time via snow and sea ice accumulation, along with glacier inflow in certain places.

Between 1906 and 1982, there has been a 90 percent reduction in the areal extent of ice shelves along the entire coastline, according to data published by W.F. Vincent at 's . The former extensive " Ice Sheet" was reduced to six smaller, separate ice shelves: Serson, Petersen, Milne, Ayles, Ward Hunt and Markham. In 2005, the Ayles Ice Shelf whittled almost completely away, as did the Ice Shelf in 2008 and the Serson this year.

"The impact is significant and yet only a piece of the ongoing and accelerating response to warming of the Arctic," said Dr. Robert Bindschadler, emeritus scientist at the Hydrospheric and Biospheric Sciences Laboratory at the NASA Goddard Space Flight Center in Maryland.

Bindschadler said the loss is an indication of another threshold being passed, as well as the likely acceleration of buttressed glaciers able to flow faster into the ocean, which accelerates their contribution to global sea level.

Copland said mean winter temperatures have risen by about 1 degree Celsius (1.8 degrees Fahrenheit) per decade for the past five to six decades on northern Ellesmere Island.

(This version CORRECTS Corrects in paragraph 3 that Serson Ice Shelf shrank to two remant sections three years ago, not five years ago; and in paragraph 13 the size of the last remaining ice shelves in Canada. Minor style edits, For global distribution.)