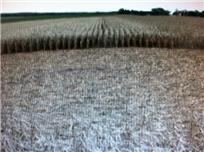 This is an important new observation of the crop circle phenomena that has been so prevalent in , in .  The reason is simple.  While folks may believe the fairy tale of boys stomping around the barley field as a practical agent (it is not), it is obviously impossible in a corn field in any circumstances.

A corn field of course is six to ten feet tall with one inch stalks.  The real surprise is that the microwave system used from high up was able to do the job.  Again it would be neat to get a field report detailing the bending of the stalks.  What is implied is greater power now been used for this technology that is meant to knock out missiles.

HARRIS -- A Harris farmer discovered two unusual crop circles in his cornfield on Thursday, and there's no explanation of how they were formed.

The two perfect circles are about 50 yards apart and 125 feet in diameter.  There is no damage to the stalks, which are all bent over in a counter-clockwise direction.  The leaves and ears are also intact.

There are theories that crop circles are formed by extreme weather, animals, and more popularly, paranormal activity.

"If it's a prank, they sure had a lot of time on their hands, and they did a pretty good job of keeping everything so unique," said farmer John Jorasz.  "They're very distinguishable.  But is it aliens?  I don't know."

The corn is 90 percent destroyed, but Jorasz sees it as a unique loss.  He plans on harvesting around the circles within the next two weeks.